Unlike the more ancient breeds we have discussed in our recent focus blogs, the Clumber Spaniel originated much later and was first referenced at the end of the 18th century. Much conjecture surrounds the early life of the breed and how it evolved, although the common belief is that it came to England during the French Revolution in the late 1700s.

Artwork from the period depicts a much smaller-looking Clumber that is otherwise identical to the one we know today. The dogs can be seen hunting alongside larger hounds, with their noses to the ground and their short limbs trotting along behind the horses.

Threatened by the Terror, it is thought the Duke of Noailles feared for his unique spaniels so much that he had them sent directly to England, to the grand estate of the Duke of Newcastle. Because of the negative associations of spaniels and the nobility, many ‘royal’ dogs were slaughtered during this time, leaving many breeds dangerously depleted. 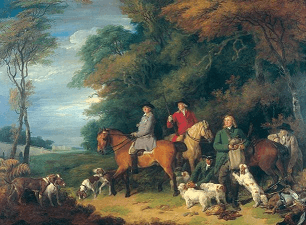 The Duke of Noailles, being the noble owner of many spaniels himself, no doubt recognised the threat and acted to protect his dogs. The estate he had them sent to was Clumber Park in Nottingham, where they were put under the immediate care of Clumber’s gamekeeper, William Mansell.

It is Mansell who is credited with developing the spaniel into the breed we know today, with possible outcrosses to the Basset Hound, St.Bernard and other spaniel types.

While little is known about the Clumber Spaniel before the late 18th century, it is certain that the breed took its name from Clumber Park where it was first developed and improved. In time, the Clumber became known as the ‘retired gentleman’s spaniel’ for its docile, working temperament. It was also favoured by several British monarchs including King Edward VII and his son, King George V who bred them at Sandringham.

Not only was the Clumber Spaniel an efficient gundog, but it was perfectly suited for upland hunting in dense cover, using its big head and loose coat to push through bushes. Besides this, the Clumber owned a gentle and dignified disposition that made it suited to an aristocratic, country lifestyle.

Queen Victoria is another royal known to have kept Clumber Spaniels, evidenced in her diary entry from October 16th, 1840. In it she describes how she "walked out directly after breakfast before Albert went to shoot. He had his 7 fine Clumber Spaniels and we went into the Slopes, with such a funny old Gamekeeper, Walters, in order that I should see how the dogs found out their game. They are such dear, nice dogs."

Because breeding before the 19th century had been largely restricted to the nobility, breed numbers never really picked up. During WWI, all breeding was put a stop to, which reduced numbers almost irreparably. 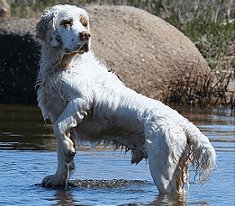 This was the same for many dog breeds at the time, as efforts were directed elsewhere and fewer people could afford to own them.

Thankfully, in 1925, the efforts of King George V to restore the breed were successful, and a line of Clumbers was re-developed at the Royal Kennels.

They were utilised on the Sandringham estate in Norfolk, for the purposes of hunting and retrieving game. Despite the King's early successes, today the breed remains rare, with fewer and fewer annual registrations with the Kennel Club.

If you are fortunate enough to own a Clumber Spaniel, please let us know! If you like, you can visit our dedicated breed page and upload your photos there :) If you have any questions, feel free to contact me directly: [email protected]

Fun facts about the Clumber Spaniel:

- The Clumber is the largest of the spaniels (43-50cm at standing height), despite remaining fairly squat in appearance.

- While the breed is rare today, in 1884, the Clumber Spaniel was one of the first ten dog breeds to be registered with the AKC.

- In 1991, a Clumber Spaniel named Raycrofts Socialite won Best in Show at Crufts.