Few things compare to the cuteness and charm of newborn puppies, kittens and rabbit kits, but no animal stays young forever, nor do all the youngsters that are accidentally conceived have a guaranteed home and family to grow up in. It is estimated that 50% of all companion animal litters are unplanned, meaning that many will end up homeless through no fault of their own.

This February is ‘Spay, Neuter Awareness Month’ and thus the perfect time for recognising our duty as responsible pet owners to ensure that the breeding practices of our animals are properly managed.

While the majority of people are in agreement about the benefits of spaying and neutering, there is a fraction whose school of thought is that ‘intact’ animals are happier and susceptible to fewer health complaints (or, in reality, different health complaints) than ‘altered’ animals.

Of course, everyone will have their own experiences of neutering and not neutering and there will be incidences of animals reacting badly to the procedure (as with any surgery, there are risks involved) however, this is the exception not the rule. Besides the obvious physical risks, some animals have displayed behavioural changes following surgery, such as increased aggression. 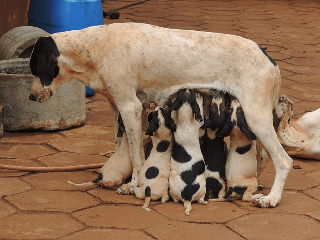 The majority of veterinarians and animal care professionals generally accept that spaying and neutering is the way forward.

Pets that are ‘fixed’ are not only safeguarded against unwanted pregnancy but bitches are also less at risk of mammary tumours and ovarian and uterine cancers. Reduced and eliminated risk of cancer is also true for male animals when it comes to prostrate and testicular cancer. Because of this, the life expectancy of spayed and neutered cats and dogs is increased by 1-5 years – evidence enough that fixing an animal has fundamental health benefits, as well as helping to manage the growing problem of animal overpopulation.

Some reports indicate that anywhere between 6-8 million companion animals worldwide (cats, dogs, rabbits etc) enter shelters every year, and a significant number of these end up euthanised because there is not enough space to house them. Rather than welcome a new litter of furry friends into the world, surely it is better to adopt from a local shelter and give an animal worthy of love and companionship a chance at life?

This is the argument of animal welfare authorities campaigning for the mandatory neutering of all cats and dogs. The issue of overpopulation is central to the debate; not only are stray animals causing problems for communities in terms of animal bites, livestock attacks and the spread of certain diseases such as rabies, but the cost of capturing them, housing them in a shelter and eventually euthanising them (a regrettable outcome that happens far too often) is high for the taxpayer.

Additional benefits of spaying and neutering include reducing aggression and boisterous behaviours – especially in male animals – lessening the male tendency to spray and scent mark, and removing the heat cycle in female animals, thereby calming them down and alleviating their frustrations and interest in finding a mate.

So, with all this information highlighting the advantages of having a pet spayed or neutered, why are some owners opting to keep their animals intact? 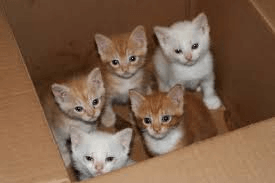 When it comes to felines, spaying and neutering has considerable benefits for health and behaviour, with male cats displaying far less aggressive tendencies. For dogs, although the same is true in most cases, some react adversely and require re-training following surgery. Another reason many people choose not to de-sex their pet is that doing so interferes with an animal’s metabolism, causing minor weight gain. Of course other factors contribute to the problem of obesity, namely exercise and diet, however the relation between neutering and weight gain should not be discounted.

Providing the animal in question is given sufficient exercise and fed a balanced and nutritious diet, any slight metabolic changes shouldn’t be a problem. Health complaints associated with obesity (orthopaedic, mobility, heart and respiratory) are a deterrent for many a pet owner, but it is important to remember that maintaining the healthy weight of your pet is dependent on you and therefore needn’t be a problem for the spayed or neutered animal.

For some, the issue is not so black and white.

The age at which an animal is fixed is controversial for many people, with evidence to indicate that neutering too early can stunt emotional and behavioural growth, causing cats and dogs to remain in their kitten and puppy-like stages for the rest of their lives.

Whilst this is appealing for some pet owners, enough of us believe it to be unfair. The counter argument, however, is that by spaying before a certain age (in bitches, before the first heat cycle) can significantly reduce the risk of her developing mammary tumours and various cancers (on the flipside, she may be at greater risk of bone cancer if spayed before a year old). 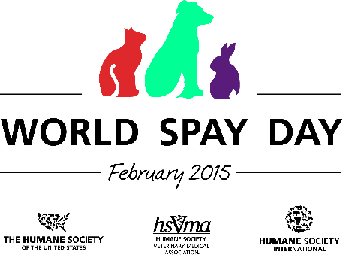 Clearly, there is support for both sides of the spaying/neutering argument and this World Spay Day (February, 25th), as well as the entire month, is the perfect time for addressing where you stand in the debate.

The veterinary judgement is, and probably will remain, that all cats and dogs should have the procedure done for reasons of health, animal population management and temperament. The benefit of fixing to health is well studied and cannot be discredited, even when aligned with health problems associated with having it. Perhaps the truest indication of the value of spaying and neutering is increased life expectancy, which, as a pet owner and animal-lover, is surely the most important consideration when it comes to caring for a beloved companion animal.

If you have any thoughts on spaying/neutering, please share them with us! Feel free to email me directly with any further questions and/or suggestions for future blog posts: [email protected]

'Perhaps the truest indication of the value of spaying and neutering is increased life expectancy...' What about this recent study that looked at the impact of desexing various breeds: Sudy looking at 759 Golden Retrievers found that rates of cancer and joint problems was significantly higher in neutered or spayed animals. in fact there was 100% increase in hip dysplasia in male Goldens neutered before 12 months!A large Viszla study (2500 dogs) shows increased risk of cancer and behavioural problems in spayed or neutered dogs. German Shepherds desexed before 12 months triple their risk of joint disorders. The way to go is to sterilise but not to desex. The ovaries or testes need to remain to provide hormones and protect against life shortening illnesses. All vets, if they're honest will know that the puppies that they neuter or spay will come back to them within a few years with joint problems or cancer. It keeps them in a job but is it ethical to keep on damaging puppies in this way?

With male dogs I like to wait until he begins to cock his leg to urinate, then he gets the snip.
Never had a bitch puppy, only older rescues who were already spayed, so no personal experience on that score.

We had our Dog [email protected] 1yearold.Large poodle/schnozer.4years now and berry happy as behaviour calmed as berry smart and loves people and other dogs.Trouble with recall sometimes.