The Facts about Canine Cancer

Cancer is probably one of the most frightening words in the English language. It is a disease we are all familiar with and will probably have encountered at some point in our lives, whether through family, friends or personal experience. Some of us will have encountered the disease through our pets and will tell you that hearing a dog has cancer is no easier to deal with than if they were human.

The odds nowadays are that 1 in 3 of us will develop some type of cancer during our lifetime. The incidence of human cancer is about the same for canines, although the cancer-type prognosis varies greatly between the two species. Stomach or gastric cancer is more common in humans, for instance, while skin cancer is 35 times more prevalent in dogs. Although any dog can develop the disease, certain breeds such as Golden Retrievers, German Shepherds, Boxers, Rottweilers and Bernese Mountain Dogs, are more predisposed to it than others.

A dog’s age is also a significant factor in cancer development as the older the animal, the more susceptible it is to the disease. Just as humans are now living longer because of improved life quality and advanced health care, dogs are also pushing up the life expectancy average. The paradox, however, is that in living longer, a dog is more susceptible to life-threatening diseases such as cancer. Some estimates suggest that 50% of dogs over 10 years of age will develop cancer - a surprisingly high statistic. Worringly, this makes it the leading cause of death in senior dogs.

So, what exactly is cancer?

Put simply, cancer is the uncontrollable division of abnormal cells in the body. The cell cycle in a healthy individual involves old cells dying and being replaced with new ones. Sometimes, the cell rejuvenation cycle goes wrong and the DNA of cells becomes damaged. In the development of cancer, the compromised cell divides rather than being killed off, thereby causing mutations in other cells. A series of mutations can form an excess of damaged cells (a tumour) that invades surrounding tissue or is transmitted to other parts of the body via the lymphatic system or blood.

What are the most common types of canine cancer?

Besides these types, common cancers found in dogs include lymphoma (cancer of the lymph nodes) - including peripheral lymphoma which occurs in the outer nodes, and internal lymphoma which incorporates the internal lymph nodes, liver and spleen - osteosarcoma (cancer of the bones), which usually develops in the long bones i.e. the front and rear limbs and therefore affects more large-breed dogs than small ones - melanoma (cancer of the skin), a type that most commonly occurs in dark-skinned breeds such as Dobermanns and can develop anywhere on the body - hemangiosarcoma (cancer of the endothelial cells found in the blood vessels) which, sadly, develops slowly and usually without pain/symptoms until its late stages, meaning that by the time it is detected, palliative care is often the only option.

Mast-cell tumour is another common type of cancer that is usually seen in Bulldogs and Boxers. Tumours very often appear on the skin and are easily noticed by the pet owner. Depending on the positioning of the growth, surgery might be undergone to remove the mass as well as a diameter of surrounding skin (this is necessary as mast-cell tumours tend to connect to infectious tendrils beneath the skin). Sometimes, the nature of the mass is such that it cannot be removed with surgery and chemotherapy might be tried instead. 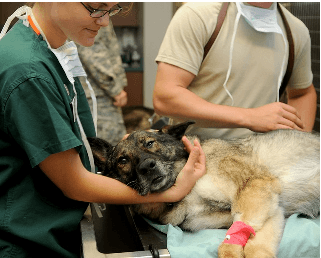 Carcinoma (cancer of the epithelial tissue of the skin or of the lining of the internal organs) is a fairly prevalent form of cancer affecting older dogs. The umbrella term 'carcinoma' applies to several different types, including squamous cell carcinoma, which usually develops on the skin or in the dog's mouth. Oral squamous cell is very difficult to treat due to its positioning and its aggressiveness, with tumours growing quickly before detection. It is estimated that 10% of dogs with oral carcinoma survive beyond a year of diagnosis.

Transitional cell carcinoma affects the bladder and urethra and may require surgery. In some cases it is impossible to remove the tumour and chemotherapy/radiation therapy might be used along with anti-inflammatory drugs. This type of cancer is usually characterised by straining when going to the toilet or blood in the urine. Mammary carcinoma (cancer of the mammary glands) is most commonly seen in unspayed female dogs and is usually a malignant type, requiring aggressive treatment. Having your dog spayed/neutered at a young age has many health benefits, besides preventing unwanted pregnancy. Read 'Spay, Neuter Awareness Month' for more info and helpful advice.

What are the symptoms of cancer?

There are so many different types of cancer that symptoms vary greatly. Like with some human cancers, symptoms might not show themselves until the cancer has progressed to a critical stage. However, there is likely to be some indication, no matter how small, that your dog is out of sorts and feeling differently. Changes in appetite, toileting habits and personality should be checked out by a vet and any physical differences you might notice such as abnormal discharge, the failure of wounds to heal, pain, and unusual odours are all common signs of cancer.

If your dog is over 6 years of age and starts displaying any of these symptoms, or if his behaviour changes without any obvious cause, get him along to the vet for a complete physical examination. Remember, you know your dog better than anyone and should trust your gut instinct when it comes to the health of your animal. Don't feel embarrassed about getting him checked over because he seemed hesitant to eat his breakfast or jump up on the sofa as he usually would, as it is always better to be safe than sorry.

How is cancer treated?

After receiving a diagnosis of cancer, one of the most fundamental questions we ask is 'is my dog going to survive?' The answer to this question very much depends on the type of cancer and its degree of spread (metastasis). Some incidences will require a single treatment while others will require combined treatment i.e. involving surgery, medication and chemotherapy.

While chemotherapy has some scary side-effects in humans such as hair loss and nausea, this is not the same for dogs. Chemotherapy treatments target and kill fast-growing cells, which, in humans, includes hair cells and those found in the bone marrow and intestine. Dogs do not have hair that continually grows as we do, so they are less likely to suffer from hair loss. Poodles and Old English Sheepdogs are an exception to this as their hair is constantly growing. You might notice some coat thinning or loss of whiskers but, generally speaking, hair loss is not a major side-effect for dogs undergoing chemo. 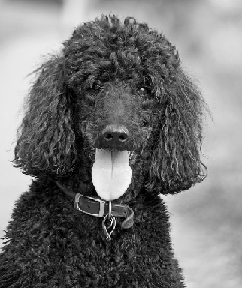 If your dog's cancer is in one place, radiation therapy can sometimes be used to target the affected area, damaging the DNA of cells and causing them to die. Radiation therapy is also used as a palliative treatment to help alleviate pain and other symptoms and therefore prolong life. If the cancer has spread extensively or the dog in question is responding badly to treatment, some pet parents make the difficult decision to end a course of aggressive chemotherapy to focus on providing their dog with the happiest and most comfortable life possible, however long he has left.

Apocaps is a herbal supplement formulated for dogs with ongoing veterinary care, including dogs with cancer. It contains natural agents which help the body to better absorb apoptogens - believed to support cell cycle processes in the body. The process of apoptosis involves new cells replacing old, something which is compromised in cancer development. Apocaps is the first all-natural apoptogen supplement (containing luteolin, apigenin, curcumin, silymarin, beta-glucans and singerols), shown to improve life quality in some canine cancer patients by targeting abnormal cell masses and promoting healthy cell rejuvenation.

Unfortunately, until a cure for cancer is found, a diagnosis will always have us expecting the worst. It is important to remember that some cancers can be cured and if not, there is always something that can be done to help your dog in his time of need, even if it just boils down to pain-relieving medication and palliative support. The earlier cancer is caught, the better, and one of the best and only ways to do this is by having regular physical examinations at the vets. Cancer can strike in any dog at any time, but be particularly aware if your dog is a susceptible breed i.e. a Boxer and over the age of 6. If you notice any changes, take your dog along to the vet straight away.

If you have any advice on caring for a dog with cancer, please share it with our other readers! Feel free to email me if you have any questions or suggestions for future blog posts: [email protected]

My Lab cancer had gone to the lungs (he was coughing & could hardly stand) and cancer was diagnosed as terminal. It was palliative management when our vet put him on a special type of lingzhi (mushroom) called Sang Hwang and the tumor in his abdomen (no biopsy done but probably the primary source of his cancer) shrank on subsequent ultra-scans. It improved his quality of life and he could go for long walks for 3 mths. One day he collapsed and we felt that it was time for him to go without pain or by compromising the quality of his life. I believed the extra time of a reasonably normal life was due to this stuff & low dose chemo therapy both to make the dog comfortable.