When did Reindeer become associated with Christmas?

If someone asked you to list popular symbols associated with Christmas, who would mention Rudolph?

Shooting to seasonal stardom after his creation in 1939 by copywriter Robert L. May, ‘Rudolph’ has come to represent the festive magic of christmas, not just in the United States but across the globe. The chance creation of a disheartened reindeer marginalised by his friends for his very shiny nose, earned Robert L. May and his publisher Montgomery Ward world recognition.

But what inspired May's original conception of Rudolph? Was it an early 19th century poem about eight reindeers pulling Santa's sleigh, or, was it the Norse legend of Thor – a god transported in a chariot pulled by horned goats (that supposedly transformed into reindeer)? Who knows. "Reindeer" is itself an ancient Norse word believed to mean ‘horned animal,’ so this theory tallies.

But besides the most decorated fictional reindeer of all time (originally named Rollo, before Reginald, before Rudolph), the species reindeer or Rangifer tarandus has a history dating back over 2,000 years. Hailing from the world’s arctic and subarctic regions, the reindeer or ‘caribou’ boasts an exciting history.

Used by various circumpolar people for economic purposes throughout ancient time - including the Saami, Evenks, Chukchi, Nerets and Khants communities - the reindeer was heralded for its skills in husbandry and for supporting the livelihoods of the people. The modern reindeer was also widely utilised during the Second World War by the Soviet forces as a draught animal helping to transport injured soldiers.

We are all familiar with Santa’s famous eight – Dasher, Dancer, Prancer, Vixen, Comet, Cupid, Donder and Blitzen, although these are a relatively modern troupe, having first appeared in literature from 1823. However, for centuries reindeer have been associated with Christmas and winter festivities, particularly in Scandinavia and across Eastern Europe. Pagan mythology loves the reindeer and during the Middle Ages (when Pagans converted to Christianity), their ancient customs became a part of Christmas celebrations. 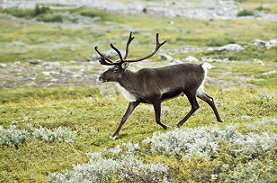 The reindeer came to symbolise creativity, resourcefulness and knowledge, whilst also representing safe journeying and endurance through travels. The idea that reindeer brought people safely home over a harsh winter landscape is likely to have inspired the popular story of Father Christmas. Having been domesticated since the Bronze Age, the reindeer has proved itself as an invaluable asset time and again.

In the west, the species has always been thought of as mysterious - an elusive creature of the northern hemisphere that serves people through transport, warmth from hides and nourishment. Their antlers particularly were thought to contain something that could be used as a medicinal and nutritional supplement, and in many cultures reindeer antler is still considered a highly effective natural remedy.

Like Rudolph, who finally gained the respect of his fellow reindeer (as the story goes) by showing heroism when he successfully guided Santa’s sleigh through heavy fog on Christmas Eve, throughout history reindeer have been highly revered for their docile and dependable natures, and their dexterity in a range of tasks. If ever a fictional tale was areflection of reality, then May’s Rudolph the Red-Nosed Reindeer is certainly that!