The Italian Spinone, or Spinone Italiano, is believed to be one of the oldest gundogs in existence, although there is some speculation about where it came from (despite its name!). Some say the Piedmont region of Italy; others say Ireland, France, Spain, Greece or Russia.

It’s true that the Spinone bears a striking resemblance to many European breeds, including the Spanish and German Wirehaired Pointers, the French Griffon and the Russian Setter. Some sources claim the Spinone’s true ancestor is the Segugio Italiano, an ancient breed of hunting dog which is now extinct. 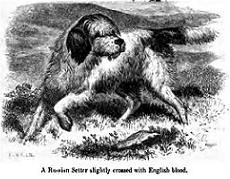 Originally known as the ‘Prickly Pointer’ on account of its coarse, bristly coat or the ground conditions on which it worked, the breed only adopted its name ‘Spinone’ in the early 19th century. Where this came from is easily explained; the ‘spino’ is a prickly Italian thorn bush, a popular hiding place for small game quarry, which is what the dog was originally bred to hunt.

The Spinone was evidently very successful in this role and was utilised in hunting for many centuries. Its rough, weatherproof coat made it perfectly suited to fending through sharp bracken and briars without getting hurt.

Socially, hunting carried massive importance from one end of the spectrum, where it was necessary for food, to the higher end where great status was attached to hunting as recreation. Just as good, reliable horses were highly valued, hunting dogs like the Italian Spinone carried large price tags and were fiercely protected by their homeland governments.

While the Spinone didn’t have speed on its side, it did excel at hunting in dense or close cover and at retrieving from water. However, despite its lengthy popularity, today another breed of gun dog, the Bracco Italiano, takes the lead as the most popular Italian hunting dog. 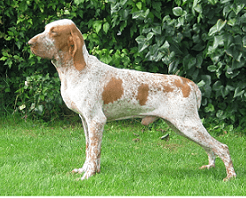 Highly sought by the aristocracy during the Renaissance era, the Bracco enjoyed great popularity for many years, however, towards the end of the 19th century it was facing near extinction.

This was the same for the Italian Spinone, whose decline was evident with the coming of the First and Second World Wars - something that was true for many dog breeds of the time, who suffered enormous losses when breeding efforts ceased during the conflicts.

Today, both breeds can still be found as working dogs and companion animals. If you are fortunate enough to own a rugged Spinone or Bracco Italiano, please let us know! If you like, you can visit our dedicated breed page and upload your photos there :) If you have any questions, feel free to contact me directly: [email protected]