Why should I worm & flea my pet regularly?

The chances are, every dog and every cat will get worms and fleas at some point in their life. Often, infections are manageable but even healthy looking animals may have the beginnings of something more sinister inside them.

The consequences of a flea infestation are clear enough and most of us will have been faced with one at least one outbreak in our pet-owning lives. Not only are fleas a nuisance to our pets by causing intense itching and scratching, they can result in more severe reactions such as flea allergy dermatitis.

When it comes to worm, in extreme cases and depending on the type of worm, there may be awful consequences such as intestinal blockages, blockage of blood flow in the heart, inflammation of arteries, anaemia, and even death if left untreated. 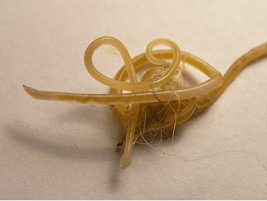 Early signs to watch out for include poor growth and a bloated abdomen in puppies/kittens, a dull and brittle coat, increased appetite, weight loss, coughing and abnormal breathing, vomiting and diarrhoea (either may contain whole or fragments of worms!), blood in faeces. A tell-tale sign of tapeworm in particular is small white fragments of worm in the fur around the bottom.

Where does the threat come from?

Throughout their lives, parasites pose risks in many ways and we need to be aware in order to protect our pets properly. Fleas can carry tapeworm larvae, which is why regular de-fleaing is as vital as regular worming. 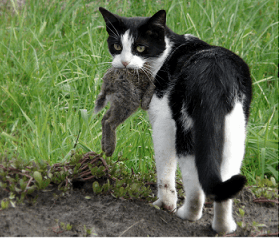 So, how often should I worm my cat/dog?

Adult animals come across a greater variety of worms and depending on their lifestyle, may need worming once a month or once every three months.

We recommend using TermaWorm Tablets or Prazitel multi-wormer tablets for both dogs and cats. They are ideal for routine worming and monthly treatments if required.

No matter the category a pet falls into, we shouldn't wait for trouble to rear its head before taking action.

I do a worm egg count on all my cats. We have 4 at present and our queen is expecting a large litter of kittens in July. I have been doing worm egg counts on my cats, dogs and horses for a number of years now. I have never wormed any of the cats since I started this targetted program. I have done over 150 worm egg counts on horses and only needed to worm on 6 occasions. It is a known issue that worms are developing a resistance to wormers and no new wormers are presently in development so worming without checking is expensive and a dangerous practice.

It is very true that resistance issues are widely documented in horses and it has become quite a large problem there, which is why worming strategically with chemicals appropriate for the type of worm being targeted is important, along with knowing the weight of the horses to allow accurate dosing. The subject is very complex but we have a guide which you can find on the horse worming page, which covers and explains main aspects of it.

With common roundworm and tapeworm in dogs and cats there isn't the same widespread issues with resistance, but we should avoid promoting resistance by over worming or dosing incorrectly (under-dosing). Each animal should be looked at separately to decide how often they should be treated.

For cats who don't hunt and dogs that don't eat everything they find outside or mainly live indoors, worming 2-4 times a year just to make sure that any they do pick up don't get out of control will be fine (some pets could be treated less often if worm counts are carried out and show that there isn't a significant adult infection present).

Not all infections are picked up by worm counts though, and in particular Toxocara species in cats and dogs lay dormant in the muscles until the animal's immune system weakens, such as during pregnancy or old age. These species of worm most often cause problems in puppies and kittens, but if humans acquire infection, consequences of Toxocariasis can be serious, such as blindness. It is particularly important to treat animals for the roundworm if you have small children who play in the garden and with pets, then put their fingers into their mouths without washing their hands.

For hunters, each prey eaten is a possible source of infection, so more regular worming is required to ensure worm burdens don't get to a level where they become a health concern. Both roundworm and tapeworm should be targeted in active hunters. With proper dosing it reduces the chances of worms surviving and becoming resistant.

We are always happy to give advice on products, dosing and working out worming plans for your pets (big or small!). Our email address is: [email protected]

My Labrador is having Advocate as a flea and worm treatment. But he needs a tapeworm treatment as he is regards dead rabbits as a specialty. I worm for tapeworms every 2 months with Drontal, is this enough and do Termaworm do a wormer specific for tape worms and if they do would I be able to use it with the Advocate please.
Thank you
Sandra Bass

TermaWorm treats all common tapeworm and roundworm found in the UK. It is also safe to be used alongside Advocate.

I hope this helps :)

I used to give my dogs Drontal because it was described as 'very palatable' but it took all my ingenuity to hide the broken up tablets because they hated them! I now use Panacur which, in spite of its thick white consistency making it easy to see, goes down fine with the help of a little bit of taramasalata to disguise the taste. So I'm not keen on trying anything else, no matter how 'palatable' it is described as!

I used to give my dogs Drontal because it was described as 'very palatable' but it took all my ingenuity to hide the broken up tablets because they hated them! I now use Panacur which, in spite of its thick white consistency making it easy to see, goes down fine with the help of a little bit of taramasalata to disguise the taste. So I'm not keen on trying anything else, no matter how 'palatable' it is described as!

Used millbemax for my male Irish terrier. The tablet was replaced with the brown chewy tablet and my male blanked out. Several VETS said,'not tablets'. Three months later he did exactly the same and was unable to do his favourite walk. The smaller female Irish had no visual signs.
Stopping the millbemax my male improved.
The VETS recommended brevecto for ticks again my male Irish blanked and has never been the same. Vets he was just unlucky!
The major similarity with the tablets is the nano particles which I believe crossed over his brain barrier. Just unlucky? How do I explain that to what was a hundred mile a minute Irish. Your comments would be appreciated.
Russell

Not sure what to say. I got to be honest when I was in my late 30s, did not have much clue about working and fleeing animals. Importance of this. Sometimes when I put a worming tablet into my cats mouth she was always sick. The piplets weren't around then. When she was sick I did see some long tape worms. Lack of experience, I did not know what they were till I asked the pet shop. I remember leaving the cat, with my husband's sister. She told me off, she said your car is full of fleas. Shouted at me the importance of working feeling cats. She said worms and fleas colide together. I thought it wasn't a big deal at the time. Cats having fleas. As I grew older, I can see the importance. My cat catches mice regular, foxes always around my garden. I feed the foxes. Which if we don't feed foxes they will eventually die off. I now use drontal working tablets and advance fleeing products. Open the cats mouth rub her throat when I work her. Piplets good for fleeing. Hold the cat securly. Rub the throat as tab goes down, feel the tablet go down her throat while in your arms. Give her food straight after I do to make sure it's absorbed. If you don't worm you cat, they can pass nasties on to humans, specially children. Specially if you cat is a hunter in nature. To think they carry worms in them which they pick up from outside. Wildlife. Mice, foxes. Which all nature passes through you garden. It can make your animals seriously ill. Flea them too, fleas everywhere in your house. Beds, carpets, your owns clothes. You can see the damage to the fur. Cruel watching the cat suffer scratching. Fleas can burrow into the skin. Look after your animals. They can be around for a long time.

I use advocate monthly, I thought this protected them for worms too? Does it not?

ImidaFLEA Spot-On Solution for Cats, Rabbits and Dogs
from £8.73

Fipnil Plus Spot-on Solution for Cats
from £8.80

Fipnil Plus Spot-on Solution for Dogs
from £11.31