Visit to the Big Cat Sanctuary

Nestled in the Kent countryside is a hidden conservation gem. The Big Cat Sanctuary in scenic Smarden, Kent, is a 32-acre grassland site, originally founded as a safe haven for rescued big cats, including some of the world’s most endangered and recognisable species.

On the 13th February, we were lucky enough to meet with the team to learn about the fundamental conservation work they do, and hear how their efforts are helping to bring some of the most vulnerable species of big cat back from the brink of extinction.

Now recognised as a centre of excellence with four pillars of ethos – welfare, breeding, education and conservation, the Big Cat Sanctuary works tirelessly to secure a future for both big and small cat species, including lions, tigers, leopards, cheetahs and jaguars. 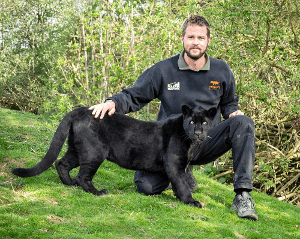 To reduce disruption and stress to the animals, the Big Cat Sanctuary does not operate like a regular zoo; viewing of the big cats is through the specialised experiences only, which helps to keep the focus on safeguarding the animals and ensuring their resident cats lead the best possible lives in captivity.

With in excess of 50 cats at the Sanctuary, covering over 15 different species, including white lions, Amur leopards, Sumatran tigers, Lynx, Pallas cats, pumas, and Rusty Spotted cats, it was a wonderful experience for VioVet’s team members who got the opportunity to view the cats in their specially adapted enclosures.

We also got to meet Maya – star of the BBC’s ‘Big Cats About The House’ documentary series, which recently aired again on television. Maya is a black jaguar who was hand-raised by Giles Clarke, director of Big Cats and Conservation, after her mother was unable to feed and tend to her.

A very important ambassador for jaguar conservation and the Sanctuary in general, Maya is a popular attraction at the Sanctuary, with many choosing to adopt her to help fund her continued care.

Alongside all their other work, the Big Cat Sanctuary is proud to be a key part of the European Species Breeding Programme, which helps to regulate the captive breeding of endangered cats, with the end goal being to reintroduce them to the wild.

Populations of the Amur leopard – the planet’s most endangered big cat, have recovered significantly thanks to the collaborative efforts of organisations like the Big Cat Sanctuary.

All cats are beautiful, big and small!

Such fantastic care & so worthwhile is the way these beautiful animals are looked after. Such dedication is just wonderful and Giles Clarke & every member of staff at the Sanctuary richly deserve the highest praise