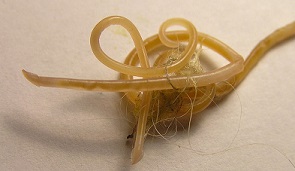 When it comes to cats, there are two main types of worms that need to be taken into consideration- roundworms and tapeworms. Roundworms mainly live in the gut and adult cats rarely have trouble with them. Kittens however are a different story. Toxocara cati, (adult worm pictured right) roundworm larvae have developed the ability to hibernate in the muscles of healthy adult cats and only emerge when the cat's immune system is not as strong as usual. For example, during pregnancy, dormant larvae emerge from the muscles and after birth, can be passed onto kittens in the queen's milk. For this reason, all cats are at risk of roundworms when younger and regular worming is important.

Some worms can be transmitted to cats by eating other animals such as slugs or rabbits. A certain group of roundworms are commonly known as 'lungworms' because of the respiratory problems associated with their larvae- these are picked up by eating slugs and snails (molluscs). 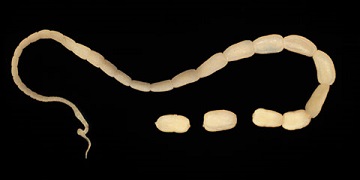 Tapeworms are more commonly found in adult cats that hunt or have flea infestations, because they all require a 'carrier' host to infect cats. The most common tapeworm (Dipylidium caninum) infections come from fleas which have eaten worm larvae and are then swallowed by a cat during self-grooming. Other tapeworm larvae reside in the tissues of rodent and bird carrier or 'intermediate' hosts, and active hunters are more likely to become infected with tapeworm after consuming infected prey. An adult worm and broken off egg-filled segments are pictured on the right.

Symptoms of a worm infestation

For the most part, adult cats will have lighter to moderate infections and show no signs. More severe infections will cause:

When to worm your cats

Kittens- it should be assumed that all kittens are infected with roundworms shortly after birth, through their mother's milk. Kittens should generally be treated from 6 weeks of age but some products are suitable for use from 2 weeks of age. Worm a 6 week old kitten every 2 weeks until they are 12 weeks old. From 12 weeks old they should be treated every 4 weeks until they are 20 weeks old. After this time, a kitten can be wormed every 3 months.

Adult cats- it is recommended that cats are wormed every 3 months but some cats may require more or less, depending on their lifestyle and environment.

Pregnant and lactating queens- not all products are suitable for use in pregnancy and lactation. ALWAYS consult your vet or SQP for advice on worming a pregnant or nursing queen.

If either a kitten or an adult cat has fleas, you must ensure they are treated for tapeworm with an appropriate product.

Other reasons for worming cats

There are worms which mainly infect cats but are able to cause disease in humans. The cat roundworm, Toxocara cati is less of a threat to humans than the dog roundworm Toxocara canis but infection is still possible. Eggs are accidentally ingested by humans and when the larvae hatch in a human gut, they travel through the body as in cats but often lose their way, causing a range of problems.

Infections are most frequently picked up by young children who play outside and do not wash their hands before putting them in their mouths. If you have a cat litter tray in the house, remove stools daily and clean the tray weekly with disinfectant and hot water. Teach your children to stay away from the litter tray and to wash their hands after playing with your pets and being outside.