The sun is out and the skies are blue; spring is well and truly here, but for cat owners whose queens are unspayed, the coming of spring was probably announced in a different way – with high-pitched ‘calling,’ urine spraying and more affection than usual.

Generally speaking, the feline heat cycle begins in March and lasts through to September. A female cat that is unspayed will usually be in heat (or estrus) every 2-3 weeks throughout the season, unless she successfully mates and becomes pregnant. Cats are polyestrous animals, meaning they enter heat several times a year with a typical cycle lasting 4-6 days at a time. It is usually fairly obvious when a cat is in heat although some cats, known as ‘silent callers,’ do not show signs of it.

A cat in heat will act differently and may become more affectionate with humans and other house pets, sidling up and rubbing her hindquarters on objects and furniture. She may also rub against the floor, adopting the lordosis position with her rear held high and her forelimbs lowered. Her rear limbs may ‘tread’ as if walking on the spot and her tail will move to the side. To mark her territory and let tomcats know she is in heat, a queen will urine mark (the increased oestrogen levels in her urine during heat will signal the queen’s condition to a tom, which may lead to a mating). 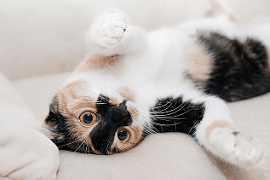 You will also notice your cat becoming more vocal, as queens produce a sonorous call to lure male cats during the cycle. Excessive licking of the genital area is also a sign that your cat is in heat, although this can also signal different problems so in the absence of other symptoms, it is best to get it checked out. Bloody discharge, loss of appetite and general restlessness are also signs that your queen is in heat, although not all cats will display all symptoms.

It is well known that veterinarians think female cats should be spayed, not only to avoid uncomfortable heat cycles but to prevent certain serious diseases such as mammary cancer, as well as pregnancy, which only contributes to the problem of cat overpopulation. Cats that are spayed do not enter heat and thus will not keep you awake at night yowling, or destroy your home and furniture with urine marking. They are also better protected against a number of feline viral diseases that can be contracted through mating with unknown male cats, including feline leukaemia.

Over a 9 year period, an unspayed queen and her offspring is capable of producing 11 million new animals. Given the number of cats that are handed in to shelters and euthanised every year because of over-crowding, it is irresponsible to allow your female cat to have litters when in season. Getting her spayed before her first heat cycle is recommended, although if you don’t wish to spay her, keeping her securely indoors during heat is essential. Your queen will be more determined than ever to get out and find a mate, so be careful to close doors quickly behind you and keep windows shut.

While spaying is the best method of defence against unwanted pregnancy, disease and serious cancers, there are preparations on the market for feline contraception which can be acquired from us with a prescription from your vet. Although these will not prevent disease, they may suppress the heat cycle and thereby stop pregnancy. If you want to learn more about contraception for your queen, please contact your vet or get in touch with us: [email protected]