How can Toxocariasis affect me?

Toxocariasis is a parasitic disease caused by Toxocara canis or T. cati roundworms commonly found in the digestive tracts of dogs and cats. Toxocariasis is a classified zoonosis that is easily spread to humans who don’t observe good hygiene when handling their pets or fail to keep up-to-date with worming.

The parasite responsible for the disease commonly affects dogs, cats and foxes, and is usually passed on from mother to offspring in utero. Puppies are the worst affected by intestinal parasites, with 30% of dogs under 6 months believed to be shedding T. canis eggs. Fortunately, most cases of Toxocariasis infection aren’t serious and human contraction is easily avoided if you know how.

How is Toxocariasis transmitted?

Dogs and cats contract Toxocara ascarids either via the placenta or from their infected mother’s milk after birth. Contaminated environments also facilitate easy transmission, with animals ingesting larvated eggs from the soil or vertebrate hosts (rodents, rabbits, earthworms etc). Dogs are the definitive host of these worms and pass unembryonated eggs (not containing an embryo) into the environment in their faeces. Here the eggs become infective after several weeks and are accidentally swallowed by another host i.e. a dog or rabbit. 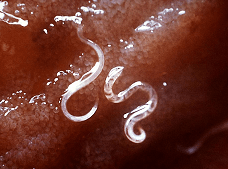 The Toxocara parasites then hatch from eggs in the stomach, penetrate the gut wall and migrate to the lungs where they travel up the trachea, are coughed up and swallowed. When this happens in fetal puppies, the larvae hibernate in the liver and lungs until the pups are born, at which time they re-emerge and continue their migration.

A puppy with Toxocariasis is likely to present with a distended belly, general listlessness, poor coat quality and a failure to gain weight. The same will be evident in infected kittens, who are at risk of repeat infection throughout their lives. Because of this it is essential that dogs and cats are wormed regularly for their own benefit, and for yours.

Humans are paratenic hosts of Toxocariasis, meaning that the larvae don't develop inside us but our bodies may serve to maintain the parasite life cycle. Following ingestion of Toxocara larvae, which happens when humans unknowingly pick up and then swallow eggs from handling soil or animal faeces, the larvae invade through our gut wall, migrate through our tissues and travel in the bloodstream, causing symptoms with varying severity.

Visceral Larva Migrans affect the lungs, liver and heart, causing wheezing, coughing and shortness of breath, abdominal pain and fever. It can also affect the central nervous system. Ocular Larva Migrans is the most serious form of infection, with larvae migrating to the eyes, causing blurred vision and even blindness. Although this is rare, cases of it are seen every year.

Young children under the age of four are most commonly affected as they often play outside and come into contact with contaminated soil containing worm eggs. Children then put their fingers into their mouths without washing their hands, accidentally ingesting the infective worms which then hatch, invade through the gut wall and travel in the bloodstream to various tissues. Dog and cat owners are also at risk and should be aware of symptoms associated with Toxocara, including stomach upsets, headaches, sore throats, listlessness and loss of vision. 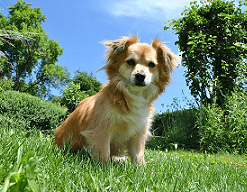 How can Toxocariasis infection be prevented?

Preventing infection is simple: wash hands thoroughly after playing with your pet and especially after handling litter, and keep up-to-date with your pet's worming. If you have children, ensure they wash their hands with soap after every interaction with a cat or dog. Make sure children never play and eat on the ground, and cover all sand-pits and play areas to avoid pets fouling in them. Empty litter trays as often as possible to limit how long larvae remain in the environment.

As young animals are the most frequently affected, it is recommended they are wormed every 3 weeks until the age of 16 weeks. After that, the general rule is to worm every 3 months (as a minimum). Panacur oral suspension is highly effective against roundworm and can be given to puppies and kittens from 2 weeks of age.

If you have an outdoor cat that hunts, it is advisable to worm more often. Prazitel is an effective multi-wormer for the treatment of ascarids, hookworms, whipworms and tapeworms in dogs and cats. For more information on the importance of worming regularly, check out our related article 'Why should I worm my cat/dog regularly?' If you need any advice on worming, contact [email protected] with your questions and someone will get back to you.