It’s that time of year when small redworm larvae (cyathostomins) that are acquired over the grazing season from contaminated pasture, begin their hibernation in the gut wall in readiness of their re-emergence come spring. Therefore it is vitally important that you worm now, if you haven't already done so, to protect your horses from the terrible consequences of mass emergence in the intestine.

As the significance of the large red worm (strongyle) has declined over the years – due, in part, to improved worming practices and advanced treatments – problems associated with the small redworm have increased tenfold.

The reason for this is poorly understood but it is believed to be due to wormer resistance, confounded by the small redworm’s unique nature to lay dormant in the gut wall, encysting itself in a protective membrane which makes it harder to treat. While it is important to maintain an effective worming routine, the blanket use of wormers every few weeks is a sure-fire way of worsening the problem of resistance.

It is also key that you're worming with the right thing, as startling statistics show that only 71% of people had correctly administered a moxidectin or fenbendazole-based wormer (The 2015 National Equine Health Survey) when asked. 22.5% had incorrectly used a wormer containing ivermectin which is ineffective against encysted larvae, and 6.3% had used a product intended and licensed for treating tapeworm only.

But small redworm is one parasite you want to treat correctly, and treat while the larvae are still in their dormant, non-egg laying phase. Come late winter and early spring when the weather improves and the worms begin their mass emergence, you may notice your horse acting ‘off’ as the active worms cause damage to the intestinal lining and prompt colic-like symptoms and weight loss.

What are small redworms? 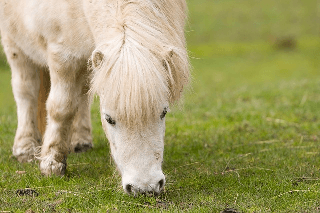 The life cycle of cyathostomins begins as eggs being passed out in dung and contaminating the pastures of grazing horses. The eggs then hatch into infective larvae (L3) which are ingested by horses and go on to lay dormant in the gut until they are activated again in spring (L4). While encysted larvae are relatively harmless even in large numbers (some have been known to lay dormant for 2 years), the presence of matured small redworms is very damaging, reducing the body’s metabolism of nutrients, which can greatly affect a horse’s condition and health.

If left, they also rupture the gut wall and cause internal bleeding which can make a horse anaemic. Unless removed from the stomach before they lay eggs and multiply, problems associated with cyathostomin emergence are severe, with symptoms including poor appetite and weight loss, diarrhoea, colic and a distended abdomen. In the worst case scenario, a horse will experience complete deterioration and even death.

How do I treat encysted small redworms?

The best wormers to treat encysted larvae in their dormant phase are Equest (moxidectin) or a five-day course of Panacur (fenbendazole). If you worm in the winter when the weather is cold and the ingested cyathostomins are hibernating, you remove the potential for serious disease. Moxidectin is considered the most effective single-dose anthelmintic for killing encysted small redworms before they have a proper chance to mature, however, it should not be used more than once or twice a year as over-exposure of the parasite to the chemical can reduce its effectiveness and bring about resistance.

Come spring/summer when the parasites begin their emergence, Equest Pramox (moxidectin and praziquantel) is the recommended wormer, or Animec (ivermectin) which kills larval and adult stages of small redworms, along with bots, roundworms and threadworms. It is worth reiterating that the use of moxidectin should always be restricted; either use as a combination wormer in early spring or late autumn (at the start or end of grazing season) to target encysted redworm and tapeworm, OR, use moxidectin solely in winter to target encysted redworm.

Conducting regular faecal worm counts is a good way of assessing the effectiveness of your worming programme and deciding whether changes need to be made. It is important to always administer the correct wormer at the correct dosage (based on your horse's body weight) to avoid drug resistance and to ensure your horse is getting the best protection.

Weight aside, some horses have a higher parasite burden than others and may need worming more, while others will maintain low numbers. A faecal worm count examines the presence of worms in a given sample and uses this to calculate the number of eggs per gram. An outcome of less than 200 worms per gram is a safe and healthy reading that doesn't necessitate worming, while a reading over 200, does. 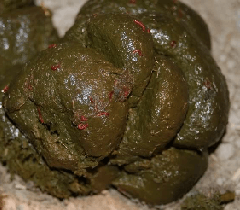 By conducting regular faecal worm counts, you can decide if your worming regime is still being successful and whether there is any evidence of drug resistance. Rather than blanket worming your horses, the goal of faecal worm counts is to identify the individual animals that need worming and to help you administer the lowest dose necessary to maintain effective worm control, without over-worming in the false hope your horse will be better protected. Faecal worm count kits are available from VioVet and come complete with instructions and a voucher for the laboratory test.

How can I reduce my horse's worm burden?

It is also widely accepted that maintaining good husbandry is necessary for worm management. As small redworms make their way into the gut by contaminating pasture that is then ingested, it seems obvious that fields should be kept clear of droppings and soiled stable bedding. If dung is left to accumulate where your horse is grazing, small redworm larvae are more likely to get swallowed. In their larval stages, small redworms are incredibly resilient and can survive for a number of days.

Subdividing grazing is another effective way of reducing the prevalence of larvae in a given area by allowing the separated pastures to recuperate. Some people choose to worm their horses and then immediately rotate their pastures but, in doing so, it only increases the concentration of resistant larvae in a paddock, as, after worming, they will no longer be expelling susceptible larvae in their droppings.

Again, many people are of the opinion that all horses that are grazed together should be wormed on the same day, but it is in fact far more beneficial to only worm the horses whose faecal worm counts indicate a parasite problem.

if there is any fallebella blood in your minis be wary of certain wormers. do some research but stick with "gentle" types like panacur

What is the best time to administer 5 day Panacur? I have read must treat during Dec/Jan? Last year we gave Equest Pramox on 31st March and only gave Panacur Paste on 4th Feb. Horses all ok but potentially I fear we did not worm against encysted redworm last year? This Year I am giving Panacur 5 day now. Thanks for advice

You can do it now - treatment for encysted redworm is in the winter months, so typically Nov-Feb. If you gave Equest Pramox last spring, it would have killed any redworm larvae that were still in the gut wall, as well as the adults, so you needn't worry about not targeting last winter (as your horses didn't have a problem).

I hope this helps :)

I would like to worm a group of horses for encysted red worm. Is February too late. All the horses are stabled.Is Equest the most suitable. Their previous worm counts have been under 200epg Thank you

Yes you should still be okay to worm with Equest. Small redworm doesn't show in FEC, so you should always treat for this in winter. Make sure you continue to FEC throughout the year though to determine whether you should worm for roundworm/tapeworm.

I hope this helps.

I have just wormed with Equest Pramox which has shown a high red worm burden. Please can you advise next steps?
Thank you

Do I need to send poo sample to the vet to ee if my horse needs to be wormed for encrysted red worm.

Hi,
I rescued an emaciated standardbred mare, who turns out infested with small redworm. She got ivermectine 1 1/2 weeks ago on arrival and today I gave her equest moxidectine. Her dung has been showing dead larvea and today, after the moxidectine, alive ones too. Unfortunately, she isn't eating well, no hay just a bit of beet pulp with pellets. The vet's checked her out, teeth floated, but he suspects her intestines are damaged by the severe infestation. I talked to several vets, one recommended deworming with dectomax to get rid of all worms. Other vets talked about giving prednisone. We put her on omeprazole and sucralfate to ease her gut to help her appetite.
What would you advise in a severe case like this? Should we try the dectomax, or another dose of moxidectine in a few weeks?

Just had results of worm count for a 23 year old Hanoverian mare, all clear except Cyathastomum (Small redworm) 200 epg, which shows as low on the guide, should she be wormed or not? She has had a bad reaction to Pramox. Thank you.

The two horses have just got Negative saliva tests for tapeworm. Last autumn tests were pos so used Pramox and Equest has been the other wormer I've used for the past three years. I have been reading your blog about resistance and ordered Equalan but does that kill encysted red worm?

Eqvalan doesn't treat against encysted small redworm, so would not be effective at this time of year.

I have just had egg counts back on my two Id x tbs. one was 150 the other was 250, they are kept in separate paddocks. I have given them the animec last week. I am due to do another faecal count in October and I also do the tapeworm test. Just wondered how soon I should reword if the egg counts come back higher in October or their tapeworm count is high and needs treating.

I hope you can advise what I should do, i wormed with eqvalan duo at end Oct as going onto temporary pasture belonging to someone else, and wormed with eraquell in November. Horses on our yard are now being advised to worm for encysted small red worms. Should I do this as is the correct time of year to do it or not as he has been wormed twice already in last few months?