Myxomatosis is a devastating viral condition affecting rabbits everywhere. As a responsible rabbit owner, it is important that you know the signs and symptoms for recognising infection and treating it immediately. While the chances of survival in affected rabbits used to be nil, widespread immunity has meant that survival rates are up slightly, with roughly 35% of infected rabbits now recovering with intensive care.

The Myxomatosis virus was first discovered in the late 19th century in Uruguay. From here it was deliberately imported to Australia in a drastic bid to reduce the country’s large population of rabbits. It worked; Australia's wild rabbit population dropped from 600 million to 100 million in just two years. From Australia the virus was introduced to France and subsequently spread throughout Europe. Myxomatosis has since posed one of the biggest threats to both wild and domestic rabbits and continues to cut short the lives of rabbits across the globe. 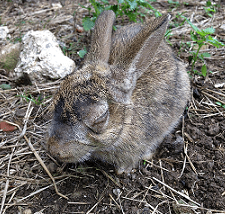 Some strains of the virus produce visible lumps and lesions, known as myxomata. These usually appear on the head and face. Other painful skin irritations can occur, causing the fur to become matted together. An infected rabbit will grow more and more listless until it can no longer eat or move. Once the condition is advanced, secondary infections (i.e. pneumonia and secondary lung infections) can serve the fatal blow to infected rabbits. 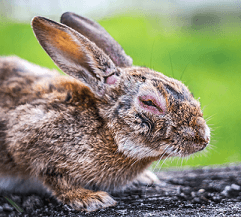 If you have experience of dealing with Myxomatosis and have advice for our other readers, please share it below. Feel free to email me directly with any further questions and/or suggestions for future blog posts: [email protected]

ImidaFLEA Spot-On Solution for Cats, Rabbits and Dogs
from £8.73