There was a time when hen keeping was a simple matter of egg production and enjoying the self-sufficient lifestyle. Just recently, more people have begun showing an interest in backyard chicken keeping, less because of the eggs and economics, and more because of chickens’ amusing quirks and characters. These days, unless your brood is laying eggs by the bucket load, there is very little profit to be made. But money isn’t everything and, nowadays, people are much more interested in having chickens as backyard pets.

Most of us generally think of chickens as hardy creatures, capable of consuming just about anything and enduring the changeable British climate with no ill effects. This is true of course, but chickens are susceptible to health problems just like the rest of us. Unfortunately, it is often a chicken’s hardiness that makes it next to impossible for us to detect when something is wrong or when a chicken is out of sorts. Feathers hide weight loss and, because chickens aren’t routinely handled or observed closely (especially if part of a large brood), noticing a change isn’t always easy. 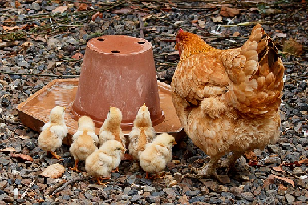 When a chicken is seriously ill, you will probably be completely unaware until you go outside and find it passed away. Sudden death is very common in poultry. But don’t panic, many health conditions do have obvious symptoms and can be treated effectively. The most common conditions are listed below, so make sure if you are thinking about getting chickens or already have a flock to your name, you read up on the signs to look out for and the steps to take for recovery.

In general terms, a healthy chicken should be alert, active and bright, with clean eyes, nostrils and feathers. It should interact well with other birds, drink and eat regularly, and produce droppings that are neither completely white, bright green nor that contain blood. Droppings aren’t necessarily the best indicator to go by however as appearance varies greatly, even in perfectly healthy birds. By comparison, an unhealthy chicken is likely to lose its appetite and be lethargic, and may start breathing with its mouth open (unless it’s a really hot day, a chicken shouldn’t need to do this).

Sometimes an egg develops inside a hen but is not laid. This can occur for a number of reasons and needs to be treated quickly (ideally within 24 hours). If there is a build-up of fat around the vent, the egg is too large, or if your hen has a calcium deficiency (or is unable to metabolise calcium in its diet), an egg may become painfully lodged in the oviduct. Excessive straining may cause valve prolapse, which is a medical emergency. Some people blame the height of perches for contributing to egg-binding and recommend a height of no more than 60cm off the ground.

If the egg is broken while it is still inside the hen, serious infection can occur. Infection caused by the presence of yolk in the abdomen is known as egg yolk peritonitis. Egg yolk is the perfect breeding ground for bacteria; if bacteria contaminates the yolk, inflammation of the abdominal cavity and internal organs can occur, which usually proves fatal. Sometimes egg yolk peritonitis can occur without warning during the formation of an egg within the reproductive system. Occasionally, egg yolk is deposited in the abdomen before it reaches the oviduct. Symptoms may come on quickly or develop over a period of weeks.

For this reason, be careful when moving a hen you believe to be egg bound. Under no circumstances attempt to force the egg out. Trying to feel for an egg trapped in the vent is safe (and sometimes necessary for diagnosis) providing you are gentle.

Signs that your hen is egg-bound include:

If egg yolk peritonitis occurs, symptoms will also include:

Mites are blood-sucking parasites that are much smaller than lice. Mite numbers usually increase in winter when birds preen themselves and dust bathe less, (because of hard ground) and are housed inside more. Red mites are particularly troublesome as they will hide in the corners and crevices of the hen house during the day, only emerging at night to feed on your chickens. 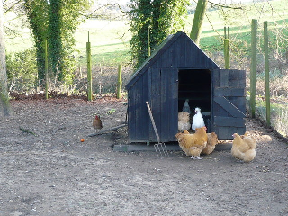 The life cycle of a red mite is 7 days, meaning they multiply at an incredible rate. If your birds seem reluctant to go into the coop at night, this is a sure-fire sign of a mite infestation. Keep your eyes peeled for grey dust beneath perches as this is the detritus left by parasites. After feeding, red mites acquire their vibrant red colouring which makes them more easily seen. Use a sheet of white paper towel to wipe beneath perches; if the towel is blood-streaked, you have a problem on your hands. A concentrated poultry shield should help fight mites and keep them away.

Considering there are 40-50 species of lice found on domestic poultry, it is likely your chickens will encounter them at some point in their lives. Lice can be very persistent and, while most chickens will manage populations themselves through preening and dust bathing etc, infestations usually flare up when health or housing is poor. If lice are not treated quickly, anaemia can develop in your chicken, leaving it open to a range of other health complaints. Lice are also easily transmitted from one chicken to another, especially if kept in close proximity.

Lice usually congregate around the vent at the base of the feather shaft. Moving them aside can reveal unsightly clumps of straw-coloured egg sacs which, gathered at the base of the quill, give the appearance of cotton buds. While lice are persistent, their entire life cycle takes place on the chicken, with lice living only a day or two off the host. This means they are fairly easy to treat with a thorough cleaning of the coop and run and a poultry dust to rid them from the birds. Large infestations of lice can cause severe skin irritation, leading to stress and inactivity. Your chicken is likely to stop laying if it has lice, although this is a symptom of various health concerns.

This condition can affect all chickens but is particularly prevalent in young birds that have no existing immunity to the parasite. Coccidiosis is a serious disease and probably the most feared amongst chicken owners. It occurs when a parasitic oocyst is ingested and attaches itself to the intestinal lining of the chicken. As the oocysts multiply, internal bleeding begins. This is usually catastrophic for a chicken unless it is treated quickly.

Infectious oocyts can be found in the ground or in faeces. The severity of Coccidiosis will depend on various factors, including the number of oocysts eaten, the site of development in the chicken and the age of the bird. Older birds are less often affected because they will have probably have gained immunity from a previous Coccidiosis infection. Particularly young birds may not have the strength to fight the parasite. If the hen house is damp, unclean and overcrowded, the conditions are perfect for Coccidiosis spread.

Symptoms to be aware of include:

If you suspect a chicken has Coccidiosis, it is important to treat all your brood immediately. The disease is so easily spread that even if your other birds are not showing symptoms, it is essential they are presumed infected and treated alongside the other. Treatment usually involves medication under the supervision of your vet. There are various formulas on the market i.e. Corid, which can be added to your chickens' water. Unfortunately, de-contaminating your yard isn't always possible, so future outbreaks may occur. This is unlikely as any surviving chickens should have now developed immunity.

There are a number of ways to prevent Coccidiosis outbreak in your birds. Vaccinating chicks when they are a day old is one solution, although it is relatively expensive. Medicated starter feeds may also be used, but not in conjunction with a vaccine (if a chick has both, it is no longer protected). Otherwise, make sure your chickens have constant access to clean drinking water and that their living quarter is well ventilated. This will promote dry litter and will ensure the coop is always kept fresh. Avoid overcrowding the hen house (4 square feet per adult bird inside) as cramped space is the perfect breeding ground for disease and its transmission. Lastly, try not to throw feed on the ground as this can quickly become contaminated.

Worms are one of the most common problems facing domestic chickens. For this reason, it is essential you are clued-up on worming before you think about becoming a poultry parent. There are several different types of worms that can affect your birds. These can be easily contracted from the ground and garden and, if there are worms to be had, curious chickens will find them. 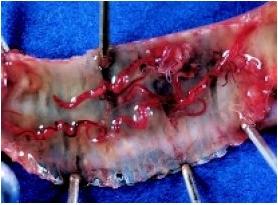 Roundworms are the most common type of worms and they live in a chicken's intestine. They can also be found in the crop, oesophagus and gizzard and have the appearance of spaghetti. The life cycle of the roundworm is 28 days and at maturity they can reach 3 inches long. This is a fair size and, as you can imagine, will cause major internal obstructions. When a chicken excretes worms in its droppings, another chicken may ingest them, thus continuing the cycle. Regular worming can help prevent roundworm build-up, which often results in listlessness, loss of weight and appetite, and slowed egg production.

Tapeworms are less common and have a ribbon-like appearance. They bury into the wall of the intestine and shed their tail segment (cyst) once a day, which re-emerges with the droppings. The cysts then dry out and release their eggs, which are often ingested again by the chicken. As with roundworms, the cycle continues again. Unlike roundworms, however, tapeworms are very difficult to kill. Standard treatments will paralyze the worms, causing them to relinquish their grip on the intestinal wall. To check for tapeworms, lay a fresh dropping onto a piece of white paper towel and look for blood tingeing and wriggling cysts. Some people use cat and dog tapeworm treatments on their chickens, although this carries its own risks. Most tapeworm is picked up from slug and snail carriers, so free-ranging birds are most affected.

Gapeworm is a type of roundworm, although, because of where it develops, can be considerably more hazardous. Gapeworms attach to the trachea (throat) which obstructs the airway and causes a bird to 'gape' as it struggles to breathe. Although gapeworm isn't as common as roundworm, it is more easily transmitted to other chickens as birds cough it up and contaminate the ground. Other chickens then come along and ingest the worms they find. Again, slugs, snails and earthworms are the most common hosts that transmit to poultry, so de-slugging your yard can help prevent gapeworm infection.