Here Barking Heads give us an insight into the intriguing world of office dogs and ask you to be a part of the 'Waggy Revolution'.

It is National 'Bring Your Dog to Work' Day next Friday 21st June, and the pack at Barking Heads pet food have surveyed 1,000 dog owners, with results revealing that 1 in 4 take their dogs to work with them. Whilst most commuters stand patiently waiting for buses or trains, the survey revealed that 60% of office dogs are chauffeur driven by their owners every day, with only 9% joining the rat race on public transport. Once in the office, two thirds of office dogs are allowed to roam free on the work floor and almost three quarters of them have their own private space and dog bed.

Gone are the days when taking your dog to work was a privilege enjoyed by only the boss; it seems that companies are becoming more lenient towards allowing members of staff to bring their dogs into the workplace with research showing that having pooches in the office boosts morale and reduces stress levels. Further evidence reported by PetMD also shows that employees are willing to work longer hours and that there is a lower rate of absenteeism in a pet-friendly environment. Whilst many of us love the idea of a pet-friendly office, for those who are a little hesitant, the survey did divulge that almost 20% of employers would question hiring someone if they didn’t like the office pup! 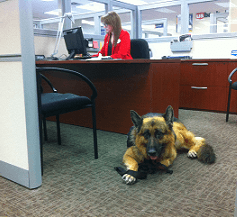 Man’s best friend now not only accompanies us to the hairdresser, to lunch with friends and even on holiday, but it has been revealed that 1 in 4 of us would have no qualms taking Fido to a business meeting. However, don’t forget the pooper scooper as just over 25% have reported that their dog has pooed in the work place!

The survey also revealed that our office dogs are becoming more and more involved in office social activities, with almost 30% taking their pooches on company runs and to their weekly pub sessions, 20% getting invited to summer outings such as picnics and 1 in 20 dogs joining in the Christmas party festivities.

With a rising number of companies including some of the world’s most reputable corporations, including Google, Amazon and Next Model Management, recognising the benefits of dogs in the workplace, the team at Barking Heads is taking a stand for office pups across the UK and today officially launches the ‘Office Dog Union’ for dogs in the workplace. The Union intends to represent the collective interests of dogs in negotiations with employers over available amenities, hours and working conditions.

Whilst many of those polled in the survey are already abiding by the union rules, it was revealed that almost 10% of office dogs were not given regular comfort breaks during the day, which is what the Union intends to address. Dog owners are being asked to sign up to the 'Office Dog Union' to accept the union rules and ensure their dogs are receiving the best possible working conditions. In return, all members will receive an 'Office Dog Union' bandana and regular tips, advice and discounts on pet food.

My two West Highland Terriers, Rosie and Annie, go were ever I go meetings, holidays all over europe and America. Very simple no Westies no me.