Why is my cat overweight?

Why is my cat overweight? Why are people getting fatter?

Going back to 30 or 40 years ago, cats in the UK did not get overweight. They were probably just as loved and cared for then as now, but they were slimmer. When I went to university in 1978 to start my veterinary science degree, I remember being told that dogs are greedy and will get fat if over-fed, but cats are different. For cats, “Appetite is an expression of physiological need,” we were told. Which is a flash way of saying that cats only eat as much as they need to keep going – they will not eat to excess and get fat. Well the fact is that many cats are now significantly obese, and most are probably at least moderately overweight. Back in the 1970s the average UK cat weighed about 4kg. Now it is about 5kg.

So what has happened? Why is there a difference? Why are cats so much fatter now than they were a generation ago? Almost certainly this is mostly down to the food we give them. The truth is that probably dogs would also not be fat if they were given different foods. It is just that dogs were started on their fattening diets earlier than cats, we just did not know it.

Let's consider just cats for the time being. Their natural food would be un-cooked whole rodents, small birds and the like. They would eat most of the carcass of their smaller prey – skin, bones and the rest. Domestic cats have always hunted to some extent. In the past they were often given the commercial cat food of the time, as well as scraps and treats – usually fresh meat or fish. Commercially prepared cat food in those days was tinned fish, though cheap meat was used too. Vitamins and minerals were added. The food was always wet, not dried, so it would have been about 80% water in fact. It also did not contain much carbohydrate. In the late 1970's the dried, “kibbled” dog and cat foods came out. They were cheap to produce and very palatable. The interesting thing about kibbled foods is that it is difficult and expensive to manufacture without adding cereal products to the mix. However it was soon discovered that tasty kibbles could easily be made by including cheap cereal in the ingredients, so that started to happen. Since then, it has happened a lot. The dried cat food market is now worth billions of pounds every year.

There are probably lots of reasons why cats are fatter now than in the past, but it will mostly boil down to the fact that they eat more. Why they do this is very interesting to speculate about and there are lots of theories, so here are mine:

The carbohydrate content of modern cat food (and dog food in fact) is unnaturally high. A mouse contains very little, a bowl of kibble contains lots. There is something about carbohydrate which affects satiety – the feeling of being full. Ideally cats (and people for that matter) should eat when hungry and stop when they are not. (Appetite should be “an expression of physiological need”). When food is not needed, it is best not eaten. However that does not apply to the food manufacturer. Their job is to make food which is eaten in the largest possible quantities. Therefore (unwittingly perhaps) they need to encourage food to be eaten beyond the point when the genuinely required amount has been consumed. Many people will remember the cat food adverts telling us that “8 out of 10 cats prefer it.” There is huge competition to make a diet so tasty that cats will eat it when it would be better if they just walked away. How many people continue to buy a cat food which their cats do not eat? In fact of course they buy a tastier diet, then feed it to the point that their poor cat cannot manage to eat any more. Then if they start walking away from the food before eating the whole lot, their owner looks for an even tastier food to give. No wonder cats are fat. 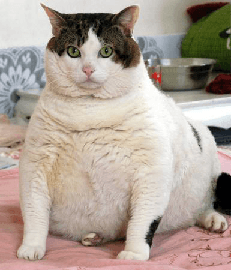 The above situation applies to people too. Most of us enjoy eating. A communal meal must of course have been the original social event. We love to fool our bodies into pretending we are hungry, so that we can enjoy the experience of eating even more food. How many people might say “I am hungry but I don't know what to have?” What they really mean is they are not hungry but would like to experience the pleasure of eating something. In fact we have become very good at producing tempting foods and snacks which allow us to indulge in the pleasure of eating far beyond the point that our bodies actually need the food. Look at the world we live in. For people of modern Western society, tempting and fattening foods are everywhere. We love it, but then we wonder why so many people are getting fat. Cats too are unknowingly caught in the same trap we have made for ourselves. Supply an endless quantity and variety of ridiculously tasty foods then see what happens. Bingo! We all get fat.

Many people will observe that their pet cat will kill mice or voles, but then not eat them. They are often presented as little presents by the back door. This is mostly because cats enjoy hunting, but the idea of eating a mouse is about as appealing as a good salad is to the average teenager. Why would the cat eat the mouse, when there is all that lovely cat food waiting in the kitchen?

So what is the answer? In a way it is simple, but in practice it clearly is not. Very few people would be fat if all they had to eat was a perfectly nutritious gruel, carefully blended to supply the correct amount of every possible nutrient, but tasting of cardboard. In that circumstance, appetite would be an expression of physiological need. Not many people would happily accept that situation, for themselves or their pets. It is possible to do something about it though. Carbohydrates are interesting to consider. I think of them as the vehicle used to transport extra calories into the body. Cats should probably eat very little carbohydrate at all. (People probably need some in their diet, but nothing like the amount we have.)

The latest development in dog and cat food is to reduce the carbohydrate content. It will be interesting to see where this trend takes us, but I am sure it is a step in the right direction. Producing a diet which is less appetising would probably be commercial suicide, but maybe that will come too in time. For now, it would be better to provide cats with good food in limited amounts twice a day and expect an empty plate at the end of each meal. Low carbohydrate food would certainly be more natural and would reverse the change which has been happening in cat food over the last 30 to 40 years. I would also make the observation that a fussy cat is always the product of the feeder, not the cat or the food. Fussy cats are extremely common now. They become that way by repeatedly being offered more food than they can eat. So they pick out the best bits, leave the rest, and come to expect the most tempting of morsels every time. Fussy cats are always overweight. The answer is to significantly reduce the amount offered, stick to 2 meals per day, and assume that unless they are showing signs of being ill, any left over food is clear evidence of being given dramatically too much food. That should never happen with any cat which is needing to lose weight. Most cats these days do!

It's a bit sad really, some owners trying to do better for their cat by finding them a food they prefer, but it has the opposite effect

My husband and I love looking for new goodies for our cats ( all 8 of them!) but realise after reading your article that they probably don't need or want it. These attractive adverts on tv are for the owners, obviously, not the cats. With this new information , provided by you, we will try to change the eating habits of our felines and look for low carbohydrate brands.

I believe that cat owners need better education. My other half laughs at me for spending hours researching into things, just as I have done for cat food. Many supermarkets and online stores sell 'branded' cat food that is absolutely terrible if you actually spend a few minutes reading the ingredients. A lot of these will also promote special offers on these rubbish brands rather than the good stuff. Why? Because a lot more owners will buy them them, meaning more money for the store. They don't care about animal welfare. The more expensive brands that actually contain less carbs are never on offer. Possibly because people like me who care about what I feed my cat will pay for these expensive foods anyway.

I recently only realised what was in the more common supermarket brands of cat food, my house cat is overweight and I haven't, certainly not intentionally over fed her. I have since changed her food to an 80% chicken kibble with no added carbs and she only gets small amounts, she does exactly as you suggest, finishes every drop that's in the bowl. Its incredible to think that there is next to no meat in some of the brands sold, just additives and animal derivatives!

I pay much more for food now but I know she is getting a better diet and hopefully in time will lose some weight.

I think if it was more widely known what is actually in some of the cheaper brands more people would change. Totally agree with Nat. I felt terrible once I realised what I had actually been feeding my cat unintentionally for years!

Hi Marlene at that age I would guess an over-active thyroid gland. So check its weight and take it to the vet and get a blood test (about Â£100 regretfully). my 18 year old got very thin, but will not take tablets anyway (unless you want to lose your fingers) so I give thyroid cream in her ear.

We kill them with kindness.

It can be difficult when you have cats in different stages of life, some overweight some painfully thin. In a multi cat household it's very difficult to cater for all, even when feeding high quality, low carb food. my 17 year old would waste away if he didn't have food down as he has a small appetite and has always 'grazed' throughout the day.