For the 67th year in its history, the greatly anticipated Badminton Horse Trials is underway – one of the most challenging and exciting equestrian events of the calendar. This three-day event guarantees horses and riders one of their toughest trials, and promises the 150,000+ spectators that flock to the venue every year a wonderful display of dressage, cross country and jumping, in a thrilling competition setting.

Since first opening its doors in 1949, Badminton has been a popular occasion for horse lovers - both at home and across the globe - and has expanded and changed hugely since the first Trials in which only 22 horses entered and some 500 spectators sat watching on bales of hay. The event now draws the masses, including 84 riders, 500 journalists and TV cameras, 600 volunteers, and nearly 300 trade stands, covering a total area of 500 acres of Badminton Park. 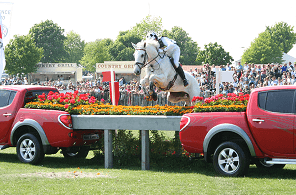 But the scale of the show isn't the only fascinating thing about it. In fact, its history alone warrants an article of its own, not to mention the hundreds of competitors with their numerous Badminton success stories. If you want to gain a bit of an insight into the world-famous event, have a read of our fascinating facts round-up!

- The youngest horse to win Badminton was Golden Willow, an American-bred Thoroughbred who was 5 at the time. This will never be beaten as horses now have to be 7 years old to compete. By comparison, the oldest horse to win was Horton Point, a 16-year-old ridden to victory by Mark Todd in 1994.

- The 10th Duke of Beaufort came up with the idea of hosting an annual equestrian event at his home - Badminton Park. He believed that Badminton could be used as a training ground for British riders wanting to compete at an international level after being a spectator at the 1948 Olympics. The idea was that it would make it easier to select the British Olympic team, which it certainly has in the years that followed.

- Badminton House or Manor is mentioned in the Doomesday Book as being located in the village of 'Madmintune.'

- Before the Second World War, the Trials had been largely reserved for cavalry officers and consisted mainly of the usual cavalry exercises. Naturally, women were excluded from the competition, which was normal for the time.

- The first European Championships were held at Badminton in 1953. The winner was Major Laurence Rook on Starlight XV. 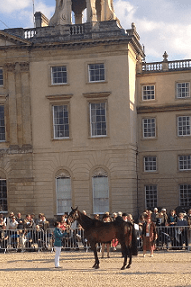 - The Badminton Horse Trials were re-located to Windsor in 1955 at the invitation of the Queen. The 2nd European Championships were held here and the following year they moved back to Gloucestershire.

- The record for most completions at Badminton is held by Andrew Nicholson of New Zealand who has completed the course 33 times but is yet to win.

- No stallion has ever been a Badminton champion, although Welton Apollo has completed the course on three occasions and came 8th in 1989.

- In 2014, the Badminton Horse Trials was voted the ‘Event of the Year’ by international publication L’Annee Hippique.

- Total prize money for the three-day event is roughly £330,000, with the winner taking home £80,000 and the top 20 competitors scooping smaller but still significant amounts. This is compared to the Grand National - an event that awards its winner over half a million pounds!

If you're lucky enough to be attending Badminton this year, have a great time and let us know what you thought! If you have any interesting facts of your own, please comment below or email me so I can add them to our list :) [email protected]

Science Supplements ProKalm for Horses
from £10.99

TopSpec Calmers for Horses
from £24.95

Global Herbs SuperCalm for Horses
from £13.99