What is equine grass sickness?

Otherwise known as ‘equine dysautonomia,’ equine grass sickness (EGS) is a rare but predominantly fatal condition in horses, with a mortality rate of roughly 95%. The illness was first seen in Angus, Scotland in 1907 and remains much of a mystery to horse owners, despite a wealth of research being undertaken to try and discover a definitive cause.

Since its discovery over 100 years ago, Great Britain has had the largest number of cases in the world; evidently, whilst it is still a rare disease, your horse is more likely to encounter it here than just about anywhere else on the planet.

One thing that is for certain is that grass sickness can affect any horse, irrespective of age, breed and sex, but is more prevalent in horses between 2-7 years old. Older horses seem to have an acquired resistance to the illness; just as very young foals are rarely affected by it.

That said, no horse (pony or donkey) is immune from this devastating condition, which is why it is important to be aware of its clinical signs and, in particular, their resemblance to signs of colic. In fact, many examples of acute and subacute grass sickness are misdiagnosed as colic, leading to delay in appropriate treatment. 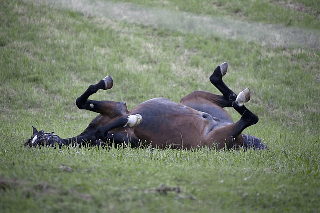 Rather than being directly caused by the consumption of grass, as its name would imply, the illness was named as the vast majority of grass sickness cases occurred in horses turned out.

In acute and subacute forms of grass sickness, swallowing and defecating become next to impossible. A horse can no longer swallow, digest or expel food, effectively debilitating an animal and leading to its rapid deterioration and death.

As yet, a definitive cause has not been found. Frustratingly for owners with horses affected by the disease, this makes preventing future outbreaks difficult. Over the years, many theories have circulated about the cause of grass sickness, including insects, plants and fungi, chemicals and nutrient and mineral deficiencies, although consistent associations have not been made.

Recent evidence strongly implicates involvement of Clostridium botulinum Type C, a soil-borne bacterium, in the development of EGS. This would explain why turned out horses are more at risk than stabled horses. Today, it is firmly believed that when the spores of C. botulinum C are ingested, their potent neurotoxins (to which horses are highly sensitive) multiply in the intestine and are transmitted to the bloodstream, resulting in eventual nervous paralysis of central, peripheral and enteric systems.

While the causal link has not been proven, various research studies have provided strong and convincing evidence that Clostridium botulinum is to blame, and a 'toxoid' vaccine is currently under development to offer effective protection against the disease.

What are the signs and symptoms of grass sickness?

Grass sickness takes three forms: acute, subacute and chronic. In the case of acute and subacute illness, the horse is usually always euthanised on humane grounds to prevent any further suffering to the animal. Occassionally, a horse with chronic illness will be nursed back to health, although there are no guarantees your horse will make a recovery, even with intensive, round-the-clock care. 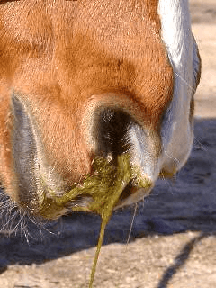 Acute sickness onsets quickly and symptoms are usually severe. If your horse does not die within 48 hours, your vet will probably advise it is put to sleep. Your horse will no longer be able to drink, eat or pass droppings, its heart rate will be critically elevated, its mobility greatly affected and its breathing laboured. If the condition is left to progress, your horse's stomach is susceptible to rupture. To avoid an unpleasant death for your horse, have him put to sleep as soon as you are given a confident EGS diagnosis.

In subacute cases, symptoms are slightly less severe and often progress over a period of days. The same advice to euthanise is usually given by a veterinarian after 7 days, in order to end the animal's suffering. Chronic cases are slightly different in that symptoms onset gradually and are much more mild. Although there is more hope for these horses, their condition is still considered critical. A horse with chronic grass sickness is prone to rapid and extreme weight loss, which is often the most obvious warning sign. In 50% of cases, a horse with chronic illness will survive.

- Difficulty in swallowing and inability to eat/drink

- Reluctance to eat/drink and some difficulty swallowing

If you have any advice on coping with a horse with grass sickness, please share it with our other readers! Feel free to contact me directly with any further questions and/or suggestions for future blog posts: [email protected]

[Note: Equine Grass Sickness and Equine Atypical Myopathy are not the same condition. Equine Atypical Myopathy is a fatal muscle disease that usually affects autumn/spring grazing horses. Like Grass Sickness, the exact cause is indefinitive, although it is commonly believed that hypoglycin A toxins, found in the sycamore seed, are responsible. In a study conducted by the University of Liege, it was discovered that, of 17 horses with confirmed Myopathy, all had high concentrations of hypoglycin A in their blood, and the pastures of 12 of the horses had a sycamore tree present. Unfortunately, the condition onsets quickly and is difficult to treat. Classic symptoms include muscle weakness and trembling, lethargy, pain and collapse. A low temperature is also a sign, along with dark urine.]

I have been involved with 4 horses with grass sickness. The first was very sudden and I can only say he was dead stood up. Despite every effort he died.
By the time of the second I had been introduced to homeopathy and herbalism.. It was a hard fight but he came round and so did the other two. You need to look for anti- inflammatory herbs and remedies for viral infections. In all the cases I saw, there was a problem with rats and I suspect that they spread the disease.

Thank you for your comment Elizabeth. Good information to know.