Be the first to review this

An aid to the prevention of hypomagnesaemia (grass staggers). Supply magnesium to cattle over
a 4 week period. POM-VPS.

Below is the product datasheet. This has been provided by the manufacturer and should always be provided with the medication.

Rumbul Rumen Bullet 40g (and 15g) Continuous Release Intraruminal Device Cattle (sheep/calves) are intended to be used as an aid for the prevention of hypomagnesaemic tetany in dairy cows (of at least 300 kg bodyweight) and sheep (of at least 30 kg bodyweight) during the high risk period associated with the grazing of rapidly growing spring grass after lambing. They may also be used for suckling calves (of at least 50kg bodyweight) where the diet is predominantly milk. 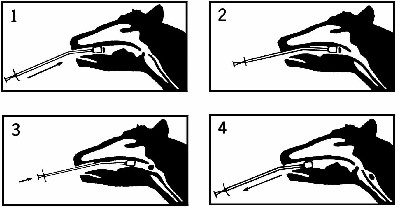 Load the gun by inserting the bullet into the open end. Open the animal's mouth and the gun should then be introduced carefully and gently, until the bullet is in the region of the back of the tongue. Severe pressure on the tongue should be avoided.
Depression of the plunger (fig 3) will deliver the bullet on to the rear part of the tongue, thereby initiating a swallowing action. The gun should then be carefully withdrawn from the mouth (fig 4).
For cattle and calves only - a second bullet should then be administered following the same procedure.
Observe each animal for a short time after dosing to ensure the bullet(s) has (have) been swallowed.

Rumbul Rumen Bullet 40g (and 15g) Continuous Release Intraruminal Device Cattle (sheep/calves) are particularly recommended for adult dairy cattle and sheep when grazing rapidly growing grass in the spring when there is a well defined period of high risk. It is difficult to establish experimentally their effect at other times of year when clinical tetany may occur unexpectedly.
Consumption of more than small amounts of other feeds (e.g. hay, silage, concentrates) may, by altering the pattern of rumen fermentation, change the rate of release of magnesium from the bullets. Rumbul Rumen Bullets may occasionally be regurgitated. This may happen very shortly after being administered if they have not been completely swallowed. The bullet may more readily reach the reticulum or base of the rumen if it is not given immediately after hay or silage has been given. Animals should be observed carefully for a few minutes after administration. Towards the end of their useful life (when the bullets become both shorter and of greatly reduced diameter) there is a small chance that regurgitation may occur. If it is noticed that an individual animal has regurgitated a bullet, treatment should be repeated.
Rumbul Rumen Bullets do not necessarily restore blood magnesium concentration to accepted normal levels. In the vast majority of situations good control of hypomagnesaemic tetany is obtained. However, because of the varying complexity of factors involved in the condition as it occurs in different situations there may be a very small proportion of animals which do not respond to the treatment. Rumbul Rumen Bullets cannot be expected to correct chronic hypomagnesaemia which may follow a long period of under-nutrition.
In areas where there is no known copper deficiency, no additional supplement of copper should be given to animals which have been administered Rumbul Rumen Bullets, for the active life of the bullets.
For animal treatment only. Keep out of the reach of children.
Meat and milk withdrawal period
Meat - Zero days
Milk - Zero hours

Experience has shown that there are no toxic or side-effects associated with repeated dosage of individual animals over prolonged periods.

There are currently no questions for Agrimin Rumbul Rumen Bullet Cattle - be the first to ask one!