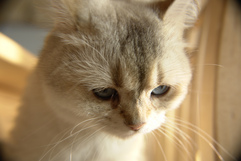 How are they really feeling?

Just like humans, cats have a wide range of personalities. It is easy to forget that animals are also capable of complex emotions because they simply cannot tell us what is wrong and we frequently overlook obvious signs of problems. Up to 10% of euthanised animals are a result of unresolved negative behaviours. Often, behavioural problems in pets lead to owners relinquishing their animals to shelters or abandoning them because they are unable to solve the issues presented. Unwanted behaviour in cats can range from severe aggression, litter box avoidance, furniture scratching and loud vocalisation to withdrawal and unresponsiveness. Whatever the symptoms, animals deserve to have their problems paid attention to. It is our responsibility as pet owners to ensure the health and welfare of our animals, and it begins with understanding their behaviour.

Living alongside humans with busy modern lifestyles can be especially stressful for cats and often we do not realise that some cats spend much of their lives battling the stresses of our homes and neighbourhoods. Cats are extremely sensitive creatures, favouring routine and familiarity. Many behavioural issues are related to continued disruption of a routine or comfort zone and being an attentive cat owner will help you to improve things for your pet should they show distress.

The early weeks of a cat's life are crucially linked to how well they cope with stress and anxiety later on. Between 2 to 8 weeks old, kittens should be handled by a range of different people, introduced to dogs and children and be within a stimulating, challenging environment to immunise them to potentially distressing situations.

Cats and other animals experience many of the same feelings as humans- frustration, anxiety, fear, loneliness etc. Symptoms of stress can be very obvious and are seen regularly in zoo environments where animals pace repetitively, over-groom and bite the bars of their enclosures. The ways in which stress and negative emotions manifest in cats will vary between individuals but behaviours can be split into two different groups with defined characteristics.

Signs of stress are frequently misinterpreted or ignored by owners. Active responses to stress are often seen as boisterous behaviour, and outbursts of aggression are a readily accepted as part of a cat's nature or labeled as 'rough play' by relaxed owners. Other issues such as regular messing indoors are less problematic for some people than others and are tolerated, leaving stress alerts unnoticed. Passive responses are commonly thought to be part of a cat's quiet or relaxed personality, when in truth the cat has resorted to withdrawing to deal with stress. In either situation, their lives continue along an unpleasant path.

The most common behavioural complaint related to stress with cats is avoidance of the litter box, going to the toilet around the house and on their owners' belongings. Cats are usually fastidious regarding their toilet habits (either using a litter tray or a particular spot in the garden) and are normally very clean animals, so it is vital to get to the bottom of any change. It is important to note that inappropriate elimination is not a form of revenge or protest. There are a many reasons that may upset a cat's habits, and you may find that the occasional "accident" is a genuine mistake or a result of upset or fear. If discoveries become regular, thorough investigation and a trip to the vets is required to check both emotional and physical welfare. Whatever the reason, you must not shout at or punish your pet, as this will only make your cat fearful and stressed, making soiling more likely to happen again.

Other possible reasons for litter tray avoidance and soiling indoors:

Medical problems/ illness: when you first notice regular accidents around your home, you should take you cat to the vet for a full check up. Soiling may be down to an underlying medical problem such as cystitis, feline urological syndrome (FUS) or diabetes. Cystitis is the inflammation of the bladder due to infection or irritation. It often accompanies other urinary tract problems commonly known as FUS. Symptoms of cystitis include sudden stop in litter box usage, straining when urinating with little being released, and blood in the urine (haematuria). Your cat may also excessively lick the genital area and cry when attempting to urinate. Many experts agree that diet and water intake have a large influence over how likely a cat is to develop urinary tract problems. Increasing intake of water can significantly reduce chances of developing cystitis. If the body does not have enough water it retains it wherever it can, usually reabsorbing it from urine, leaving it more concentrated. Like humans, pH of a cat's urine is important, and if it is very alkaline it increases the chance of crystals and stones forming, leading to cystitis and blockage of the urinary opening in some cats, usually males. Bacterial infection may be another cause of cystitis and your vet will advise you accordingly depending on the cause of illness. Diabetes Mellitus is the result of a shortage of insulin (this is the same in both cats and humans). Diabetics experience unquenched thirst and produce large amounts of urine, which can often lead to regular accidents if your pet cannot make it to the litter tray in time. Your vet will be able to diagnose and provide treatment which should resolve the soiling issues.

Litter tray issues: sudden avoidance of the litter tray not related to illness may be due to a variety of reasons.

Spraying may be confused with full urination. Deciphering which act your cat is guilty of is simple. A urinating cat will squat to empty its bladder fully, whereas a cat spraying stands normally with its tail raised in the air as it sprays horizontally onto the surface behind it. Scratching is necessary for a cat to maintain its claws however, widespread scratching around your home and on furniture is normally an indication of stress and anxiety. Middening is a term used to describe deliberate defaecation. All of these behaviours are related to scent-marking territory. Scent-marking asserts dominance over an area and being surrounded by familiar scents makes cats feel safe. Spraying, scratching and middening can all be triggered by stress and are attempts to regain a feeling of security.

Long-term behavioural conditions such as compulsive disorders may develop in a cat unable to deal with or escape the stressor(s) upsetting it. Owners may also contribute to reinforcing these behaviours, either with attention or food after a compulsive action. Over time, a response to a particular stressor can become fixed and occur in absence of the original catalyst. These are much more difficult to treat once ingrained into the animal and require professional advice to improve the cat's condition.

Minimising stress for your cat 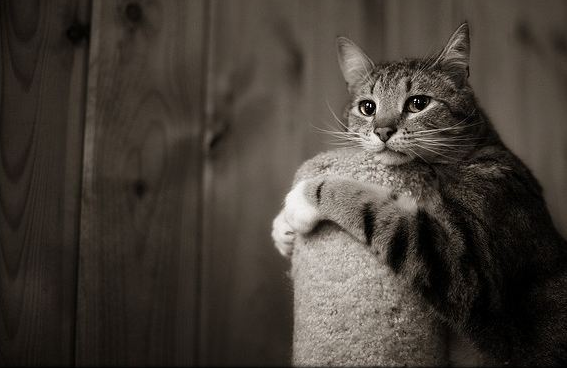 Whether your cat is an active or a passive responder, the catalyst for the behaviours are the same. Understanding how everyday life can affect cats is key to helping them.