This is a common situation. The reasons can be as follows:

During the year, dogs or cats pick up the occasional flea from outside. These fleas then breed in the house. Usually they are never seen, but gradually the flea population builds up during the summer and autumn. Over this time, regular flea bites tend to cause the animal's skin to become sensitized, so that any flea bites can have a greater effect than they would have done earlier in the year. For all this time, adult female fleas living on the animals are steadily laying eggs. These drop off onto the carpets, bedding and anywhere else the cats or dogs go. These eggs gradually develop into larvae, then pupae and eventually into adult fleas. Often large numbers of previously dormant flea pupae are stimulated into becoming hungry adult fleas when the central heating is turned on. 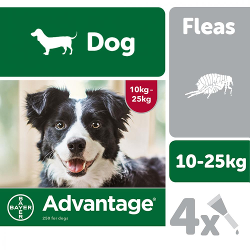 Using a product like Frontline is usually very effective at killing fleas on the treated animals. Household insecticidal sprays are reasonably effective at killing fleas in the carpets. However, the frontline can take 24 hours to kill any fleas, and during this time, some of them will have bitten the animal, irritating the skin. Also the insecticidal sprays are not hugely potent (or they would not be safe to spray in our houses). This means that the spray will at best kill off a proportion of the fleas in the environment, but not all. Some fleas will escape the treatment and jump onto your pet. When they get there they will bite the skin, then after about a day, they will die and drop off. The trouble is that other, “new” fleas will replace them. And all the time, the skin can be in a heightened state of sensitivity to the flea bites which keep on happening.

Eventually the flea population will decline. Then the skin will settle down and the itching will stop. This all takes time. It is important to re-apply the Frontline as directed, and to make sure that it is applied carefully each time. It can help to spray the carpets etc again. Ideally this should include under the furniture and on all soft furnishings too. The higher the concentration of spray, the better it works. The fewer areas left untreated, the better.

I often say that it is best to bear in mind that fleas are very good at being fleas! They have spent millions of years quietly feeding, breeding, and avoiding being seen. That is what they do, and they are good at it. If itching is very bad, some vets will prescribe a short course of a low dose of steroids, which are dramatically effective at making the skin comfortable while the flea population is being controlled.

It is possible to get a pest control firm in to fumigate the house, which will get rid of fleas more effectively, but this costs a lot more than a can or two of spray. Failing that it is just a matter of patience, and remember that flea treatments are much better if they are considered as preventatives, not treatments. If you treat for fleas all year long, even when you think there are none, then a flea problem will not develop in the environment where the dogs or cats live. If you leave it until there is an obvious problem before treating for fleas, they will have made a good head start and will take a while to get under control.