Hyperthyroidism is a common endocrine condition affecting cats. The condition involves the over-production of hormones from the thyroid, which, in turn, increases the body’s metabolic rate. This has implications for the entire body and prompts a number of changes.

Because the condition increases a cat’s circulating levels of hormone and thus heightens the metabolic rate, left untreated, Hyperthyroidism can make a cat seriously ill and may even lead to heart and kidney failure in some extreme cases. High concentrations of thyroid hormone interact with a number of bodily functions, as well as stimulating the central nervous system (CNS), which may lead to behavioural problems as well as hyperactivity and restlessness.

What are the signs my cat has Hyperthyroidism?

If you suspect Hyperthyroidism, it is probably because you have observed one or more changes in your cat. Clinical signs can be quite dramatic and you may wonder what on earth has happened to your pet in such a short space of time. The most common symptom of Hyperthyroidism is weight loss, which is seen in 95% of affected cats. This often strikes cat owners as strange as most cats will have an increased appetite that is at odds with their continual weight loss. Any weight loss in older cats should be evaluated by a veterinarian as this could be a sign of many serious conditions. 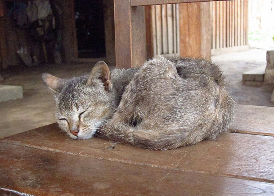 If your cat does lose weight through Hyperthyroidism, you will probably first notice muscle wastage along the spine. A loss of muscle mass may also be evident on the legs and underside. If the condition is left untreated, your cat may experience severe muscle wasting and emaciation, and this can be fatal. Even if your cat displays no other symptoms, it is very important to explain any weight changes to your vet, especially if your cat appears to be eating more than usual and is still losing weight.

Increased appetite is a symptom observed in 65-80% of cats with Hyperthyroidism. Because the condition increases the body’s metabolic rate, affected cats tend to eat more to compensate for this. However, no amount of over-eating can match the body’s weight loss and cats with Hyperthyroidism will continue to lose muscle mass despite their hearty appetites! In rarer cases, some cats will even display reduced appetite, without any of the usual signs of increased activity and restlessness. Instead they may be lethargic and weak and will consume very little. Cats with these symptoms (approx. 5%) have an uncommon type of Hyperthyroidism called ‘apathetic hyperthyroidism.’

Along with increased appetite, most cats with regular Hyperthyroidism will display increased thirst (polydispsia) and will therefore urinate more frequently (polyuria). Cats are notoriously bad at drinking water, which is why they need to get most of their hydration from their food. If you notice your cat is drinking more than usual, don't overlook this important change. 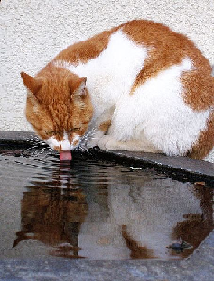 As mentioned already, high concentrations of circulating hormone can interact with and stimulate the CNS, which commonly causes cats to become hyperactive or intensely nervous. Cats with severe Hyperthyroidism are likely to twitch, tremble and/or have a frantic facial expression. This behaviour tends to intensify at night when affected cats become incredibly anxious and may yowl and pace. Cats with disturbed sleep patterns will sleep more during the day and will be strangely lethargic and drowsy.

Extreme cases of Hyperthyroidism may prompt heart palpitations and difficulty breathing, with cats at rest panting for no apparent reason. If the condition is advanced, respiratory problems are much more likely and cats will exhibit difficulty and discomfort in breathing even in cool climates. Some cats with Hyperthyroidism will groom themselves excessively, causing baldness and dermatitis. The condition of the coat may also change for the worse, losing its shine and appearance. In cats with advanced Hyperthyroidism, excessive nail growth is another symptom to be aware of. If the nails grow quickly and appear thickened or more fragile, Hyperthyroidism may be the cause.

Lastly, cats with Hyperthyroidism are like to have diarrhoea, loose, or excessive amounts of stools. A third of cats with Hyperthyroidism will frequently defecate and will also urinate more often. This is in keeping with their increased hunger and thirst. Some cats may even vomit after eating (particularly common in cats in multi-cat households) as they rapidly eat to compensate for their heightened metabolism. To help avoid this complication, try to feed your cat smaller amounts more frequently (every 3-4 hours) to prevent your cat from gorging on food until the stomach is uncomfortably full.