Keep your cat safe and sound this summer

We all know that cats are independent animals and many owners will find their pet wanders off for a few days only to return home a little grubby but otherwise no worse for wear.

However, occasionally families have to go through the heartache of having their animal go missing, and in a number of these cases unfortunately cat and owner are never reunited.

And according to recent figures from the Petlog database, the problem is worse in the summer months than in the winter.

The UK's largest lost and found pet database revealed that last year, over 3,000 more pets were reported missing in June, July and August than during the winter months of January, February and December. 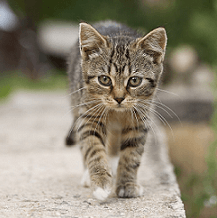 Although most cats enjoy their freedom and will often only pop home for their cat food and a snooze between climbing tress and patrolling the neighbourhood, there are steps you can take to maximise the chances of being reunited if they do wander off.

"It is worrying that so many more pets go missing in summer rather than winter, which is why it really is vital that pet owners take action now and make sure that if their pet goes missing they have done everything they can to find them again," says Petlog executive Celia Walsom.

"Microchips are a fantastic tool to reunite lost pets with their owners, as they are permanent. It doesn't matter when or where missing pets are found; they can still be returned to their owners."

Therefore, alongside buying your feline friend a collar with an identity tag attached, it's advisable to have your moggie microchipped as soon as possible.

For those owners who have already microchipped their animals, Celia points out that it is important to remember to keep your contact information updated.

She adds: "When people move, change number or email, they should immediately update their information on the microchip database otherwise they risk not being reunited with their lost pet."