Lambing Season is here! That means keep your dog on its lead!

Sheep are seasonal breeders and, generally speaking, January through May is lambing season. At this time of year we are leaving winter behind and entering spring, when days start getting warmer and the grass is more plentiful for livestock grazing. During lambing season, expectant ewes are especially vulnerable and are easily ‘worried’ by dogs that happen upon them unexpectedly in the field.

Even the most docile and gentle-natured dogs retain their natural predatory instinct (sight and scent hounds as well as herding breeds are the worst offenders) and can fail to remain calm when presented with sheep (and their energetic lambs) in pasture.

Once a sheep starts running, dogs are usually only too willing to mount chase. Sheep are also flight animals, and once they catch sight of a dog in pursuit, will flee at full speed, only encouraging the dog’s excitement further. 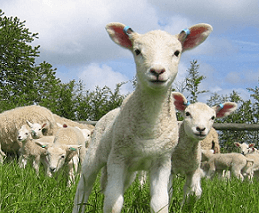 If you are out walking and your dog is off its lead, there is no telling what harm might befall the unsuspecting sheep in the next field, and there have been enough incidences of canine attacks on livestock to substantiate this.

Corsham Park estate in Wiltshire is home to roughly 1,500 sheep, two of which were near-fatally attacked by dogs just before christmas. The estate manager, Chris Waltho, stated following the attacks that,

Dogs can do a lot of damage [...] you have got to assume the worst if you are going to introduce your dog to sheep [...] it’s no good shouting at it once it’s run off."

The point he makes is central to the problem; too many dog owners simply do not consider the worst when they are out enjoying a spring walk with their off-leash dogs, and by the time they intervene it is too late to save the ewe or its newborn lamb.

We have had three sheep attacked and injured in the last 5 years and many more incidents of sheep being chased and frightened by dogs being walked through the fields. Either that or they are being taken out off-lead by owners when cycling, running or horse-riding who are not in control of them." - Pauhla Whitaker, Overtown Farm.

Sometimes dog owners are so convinced of their dog’s good training and passive and obedient nature that they let them off lead regardless of the livestock grazing nearby. Ewes that are disturbed by dogs, whether they are attacked or not, can abort their young – something which is traumatic for both the sheep and the farmer. Most sheep that are attacked usually sustain fatal puncture wounds (if they are not fatal, it is often considered fairer to euthanise the animal).

If a herd of sheep becomes fearful of dogs, it is problematic for the farmer whose animals will no longer work with the trained sheep dogs. This has economic repercussions and causes stress and financial worry for the farmer. It means that sheep are harder to manage and adopt a nervous disposition which can affect future lambing.

In Section 9 of the Animals Act 1971 it states that in some circumstances, for instance when the safety of livestock is threatened, the farmer or landowner maintains the right to shoot a dog that is ‘worrying’ his sheep, providing the incident is reported to police within 48 hours. 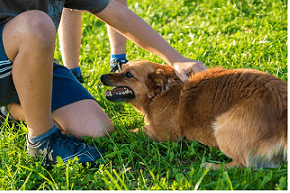 No one wants their dog to be shot at or injured, just as no farmer wants to euthanise a pregnant ewe or young lamb because of an avoidable attack that has left their animal savaged. With lambing season approaching, vets are encouraging all dog owners to be aware of livestock nearby when they are out walking with their dogs. Unless the area is known to you and you can be sure no sheep are at risk, keep your dog on a lead at all times!

Please comment below or feel free to email me directly: [email protected]

Please also consider other livestock when walking dogs. Our horses are well used to dogs and are not worried by passing dogs on leads, but we have had a couple of avoidable accidents, caused by people allowing dogs to run off lead and chase horses. Dangerous to all!

Couldn't agree more regarding the total arrogance and idiocy amongst some dog walkers who feel they have some God-like quality regarding their ability to control their unleashed dogs in a field of anxious sheep. Only yesterday I had a run-in with a fellow dog walker who let his terrier chase a very heavily pregnant sheep. I sternly intervened, and the man became very unpleasant indeed. Typical! If people can't keep the code of the countryside, they should stay in towns and let others enjoy being outdoors in peace .