Introducing your dog to other animals 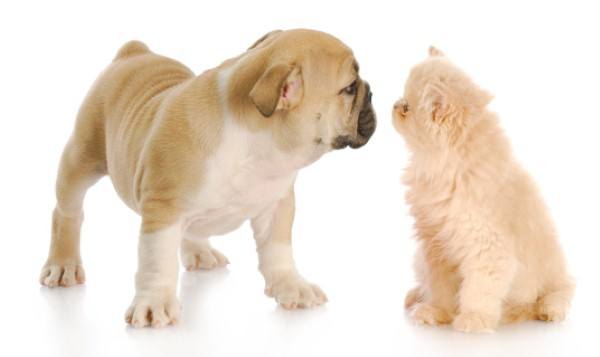 When you bring a new puppy home for the first time, as well as meet all the human members of the family many pooches will also have to contend with being introduced to other pets.

Most animals are sociable and often strike up harmonious relationships, but if you are unlucky enough to have a clash of personalities among pets, it can take a long time to teach your critters to learn to accept one another.

Therefore, when it comes to introducing your pup to other pets, first impressions are crucial but if you put in the effort from the start and take things slowly, you should be rewarded with long-lasting harmony.

If you have an older dog already at home, it is important that your puppy soon learns their place in the pecking order - and this should be below the resident pooch.

So make sure that your older canine is always fed their premium dog food first and that the puppy is not allowed to intrude on their space before they've become accustomed to one another.

For the first meeting, choose a neutral space and make sure both dogs are on leads, or possibly have the puppy in your arms.

Let the two dogs sniff one another and get used to the new sights and scents, while all the while rewarding any good behaviour with plenty of praise and ignoring any barking or whining.

Try and keep this initial introduction short and sweet, but after a few meetings they should learn to get along and will probably become firm friends.

Conventionally cats and dogs are meant to be enemies, but in reality most mutts and moggies have no problems living with one another and many actually get on surprisingly well.

However, you might find that your cat is initially a little put out at the arrival of a dog in the house, and puppies often get rather over-excited at what they consider to be a potential playmate.

Therefore, gradual introductions are once again important. Put the cat in a big room in the house and then bring your puppy in on the lead, keeping them calm and controlled, and praising good behaviour.

You may find that the cat hisses or swats at the pup or runs away, but try not to let this over-excite the young dog.

A few short sessions like this should help your pets get to know one another, but even if they seem content in each other's company, make sure your feline always has a place they can escape if your pup is bothering them.

In general, puppies won't become best friends with smaller animals, such as hamsters, rabbits and guinea pigs, but this doesn't mean that they can't live harmoniously in the same household.

However, these animals should never be left unsupervised together, and it's usually not a good idea to have your critter out of the cage when the puppy is loose in the room.

Ideally, small pets should be kept in a room with a closed dog that the dog doesn't have access to, but after a few weeks they should become used to each other's presence and happily live under the same roof.

Advantage 80 Spot On Flea Control Large Cats and Rabbits
from £8.40