Animals in the Nativity

Christmas is fast approaching, meaning many of us will have already thought about festive decorations and assembling our Nativity displays. Most will be traditional arrangements, with the manger at the centre, surrounded by the watchful shepherds and the Wise Men bearing their gifts. There is a good chance that featuring somewhere in your Nativity scene will be animals – a flock of sheep perhaps, some camels, or maybe a donkey and an ox?

Traditionally, animals have always appeared in the Nativity, whether in religious artwork, literature or physical representations of the christmas scene. From as early as the 4th century this portrayal of human/animal unification has existed. Something which the majority of us, whether Christian or not, have accepted as a true reflection of the birth of Jesus. But while we see these animals as witnesses to His birth and continue to feature them in our festive arrangements, are we right in thinking they were actually there?

Only recently, Pope Benedict XVI has spoken out about the ‘falsehood’ of our belief that animals were at the birth of Christ. In a book released ahead of Christmas last year, Pope Benedict punctured the long-held belief that a donkey appeared beside the manger, putting it down to Hebrew ‘invention,’ and asserted that no animals featured at all. His views were matched by the Archbishop of Canterbury who claimed there is no evidence for the presence of animals at Jesus’ birth written anywhere in the gospels.

Hmm. But surely there were some animals in the stable on the cold December night? It is difficult to imagine a Nativity without them. Also, there are those that believe more animals were at Jesus’ birth than humans.

Here we look at the festive symbolism of the traditional Nativity animals and why for centuries we have associated them with everything Christmas.

Perhaps the most universally recognised image of the donkey is that which carried a heavily pregnant Mary into Bethlehem on Christmas Eve.

Throughout history, the donkey has symbolised many things, from the original dependable steed or burden carrier, to a more modern symbol of idleness and stupidity, as Shakespeare liked to portray. Traditionally, the qualities of the donkey were paralleled with those of Jesus – humility, courage and patience – and the donkey was an animal held in high esteem. Christmas carols also reveal a fondness for the donkey or ass, and ‘In Good Christian Men Rejoice’ and other popular hymns, the donkey and the ox are referenced together. 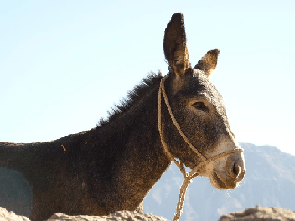 Culturally, the donkey has always played a part, being symbolic of various Greek and Egyptian gods over the course of time. It is also mentioned countless times in the Bible, pulling chariots, as a draught animal, carrying Jesus through Jerusalem and as a lowly agricultural aid. In many cultures, the donkey is seen as unclean and corporeal, which is why it is usually paired with the ox (a so-called clean and spiritual creature), thereby showing a balance of two extremes and religious unity.

With so many Biblical references being made to the donkey, it is difficult to believe that none appeared at Jesus’ birth. Perhaps they are not expressly mentioned in the gospels because people generally took their presence for granted.

Like the donkey, the ox has a decorated religious history. Beside its presence at the birth of Christ, the ox appears very little in popular culture. It is, however, a central creature in many religions and is commonly thought to symbolise true faith, sacrificial worship and holiness. It is also considered a clean animal, unlike the donkey, and is spiritual rather than worldly and absorbed in material life.

Traditionally, both the donkey and the ox were seen as meditative animals (mainly because they chewed the cud, and this was symbolic of contemplation) and were therefore quietly shown in the presence of Jesus. Those that believe animals were at the birth claim they were the only means to keep the baby Jesus warm in its cold manger, and would have provided body heat and warmth by breathing on it. 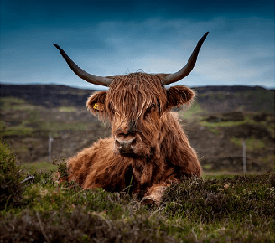 The ox is mentioned in several Christmas carols and appears in most illustrative depictions of the Nativity, as the chief witness to Christ’s birth and the one most dedicated to His care.

There is a history behind those cute sheep on your Christmas card. Historically, they have always been valued as providers for man (in terms of meat, wool etc). Some cultures refuse to eat them, believing them to be reincarnations of their ancestors. Sheep are also seen as a sacrificial animal, often substituted to the gods in place of a human sacrifice, and appear frequently in the gospels.

Sheep feature in Biblical stories and the Nativity alongside their shepherds; in Christian tradition, this is seen to represent Jesus as if he were the sacrificial lamb of God, making it no surprise that they appear at His birth. Commonly associated with Christmas and the New Year (just as they are with Easter), sheep are believed to denote new life and fresh beginnings – a theme that applies in both festivals.