Dalmatians are probably the most easily recognised dogs on the planet. With their distinctive black spots and lithe bodies, most of us will know a Dalmatian when we see one. Disney is also partly responsible for this familiarity, with 101 Dalmatians having reached the majority of us at some point in our lives.

But where did this unique-looking dog come from? Many believe Croatia, or what was formerly known as Dalmatia, an area located along the eastern coast of the Adriatic Sea. However, there is doubt that this is the reason for the name; some believe it was a deviation from the Latin and French words ‘dama’ meaning fallow deer (what the Dalmatian originally hunted) and ‘chien’ meaning dog. When said aloud, it is easy to see how ‘Dama chien’ became ‘Dalmatian.’

Despite paintings and records indicating the Dalmatian first appeared in the mid-1600s, it is entirely plausible that it emerged much earlier – in fact, it possibly even developed as far back as 3,700 BC during the reign of the Ancient Egyptians. 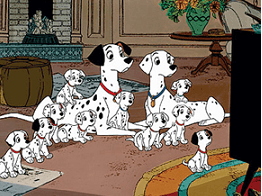 Spotted dogs aligning with today’s breed feature prominently in uncovered Egyptian pictorials, supporting a much more antiquitous history. Likewise, wall art and friezes discovered in Greece and Crete reiterate that the Dalmatian developed earlier. However, little is known for certain about the breed’s ancient origins; we are much better placed to comment on its more recent history and its modern evolution in Europe.

The early roles of the Dalmatian varied hugely, from guarding the borders of homeland Dalmatia, to deer hunting, vermin catching and circus performing. It is thought that the Dalmatian was adopted by travellers on the Continent during the 18th century, as well as by English aristocrats who took a shine to the breed and returned with it to Britain. Once here, the Dalmatian underwent development and its intelligence and natural affinity with horses were soon recognised.

From 1920 onwards the Dalmatian was widely distributed across Europe where it rose to the challenge of a carriage dog during the Regency period and accompanied coaches with some of society’s most influential figures onboard. Apart from leading or flanking the coaches, the Dalmatian was also responsible for deterring stray city dogs and guarding against highwaymen and thieves while the coachman was absent. 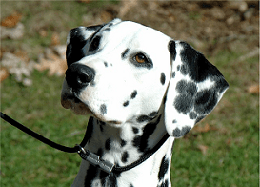 The Dalmatian was perfectly designed for this role with its sure-footing, stamina and intelligence. Its distinguishing appearance also lent itself to a job amongst the social elite. Aside from this, the Dalmatian was also associated with the fire service and became known as the original ‘Firehouse Dog’ during the Victorian era. By this point it had gained a strong reputation as a watch dog and fire brigades from England to America and everywhere in between adopted it to guard the firehouses and the engines, which were originally drawn by powerful (and expensive) horses.

Today the Dalmatian remains popular, although it is rarely seen in the fire service anymore. In the US, however, it is still a popular mascot and Dalmatians are often kept as pets by firemen in honour of their past. If you are the proud owner of a Dalmatian, please let us know! Also, don’t forget to upload your comments and images to our dedicated breed page :)

For comments and questions, either post below or email me directly: [email protected]

Fun facts about the Dalmatian:

- All Dalmatian pups are born white and only develop their spots when they are about 10-14 days old. Also, no two dogs have exactly the same number and arrangement of spots, meaning every one is unique.

- Deafness is fairly common in the breed, affecting up to 12% of Dalmatians.

- Former names for the Dalmatian include both the Plum Pudding Dog and the Spotted Dick, although they have since gone out of favour.