November is Pet Diabetes Month and this year we will be working together with MSD to raise awareness amongst animal owners. We want to help more people understand what goes wrong in pets suffering from diabetes, what to look out for, how it's treated and other complications that can go hand-in-hand with the disease. Because diabetes is such a big topic to cover, we have broken it down into 4 parts, which can all be accessed by following the links at the bottom of this page.

'Diabetes' comes from the Greek word 'diabainein' which means 'to pass through' and in medical terms, generally refers to the production of excessive volumes of urine. There are different types of diabetes, each with a separate cause. The one most people are familiar with, is 'Diabetes mellitus', and the name originates from the Greek word 'meli' for 'honey', indicating presence of sugar in the urine.

What is diabetes mellitus?

Diabetes mellitus is a condition where ideal levels of glucose in the bloodstream cannot be maintained. In diabetes mellitus, the hormone that is supposed to bring high glucose levels back to normal is either missing or ineffective so glucose concentration remains high. A high level of blood glucose is called hyperglycaemia and if an animal is hyperglycaemic for a prolonged period of time, they can suffer terrible consequences such as blindness and kidney failure. Diabetes is therefore a condition that requires medical diagnosis and long term management.

What is the significance of glucose and how is it regulated?

Glucose is an extremely important sugar that comes from digesting carbohydrates in food. The body needs to maintain the level of glucose in the blood between narrow limits for optimal health. Glucose enters the bloodstream after it has been absorbed from the intestines, then it is taken up and used as a vital energy source for cells and their processes. Any excess sugar in the blood that is not required immediately is stored in the body as an easily accessible energy reserve.

An organ called the pancreas normally has special cells in the Islets of Langerhans which produce a hormone called insulin. This hormone is released and travels in the blood and helps to reduce the blood glucose (sugar) level when it gets too high, by signalling to cells in the body to absorb more sugar from the bloodstream.

Insulin can be seen as the key to unlock the doors of cells, so when this key is missing or when it doesn't fit the lock as it should, glucose is not removed from the blood and cells cannot use it for energy. This is the case in diabetic pets and just like humans, they suffer from two main types of diabetes mellitus.

Type 1: is caused by an abnormal reaction from the immune system, where it attacks and destroys the special pancreatic cells that produce insulin- the key is missing. The pancreas is then unable to produce sufficient insulin to regulate the blood glucose level, and it remains elevated. This form is insulin-dependent.

Type 2: the cells in the body do not respond to insulin because they lack appropriate receptors or signalling molecules that respond to insulin- the key doesn't fit the door. Despite successful production of insulin, blood glucose levels cannot be brought down as the required cell responses are not unlocked. Type 2 diabetes is a non-insulin dependent form.

Maintaining certain conditions in the body is known as 'homeostasis'. Glucose homeostasis is the process which is disrupted in diabetes mellitus but insulin does not act alone to regulate its levels. Another hormone acts in the opposite way to insulin, and serves to increase blood sugar levels when they are too low (hypoglycaemia). The hormone is called glucagon and is also produced in the pancreas, by a different set of specialised cells. Unlike insulin which acts on all cells excluding the brain, glucagon influences only the liver cells and stimulates them to break down reserves and release glucose into the bloodstream. Because all blood carrying newly absorbed nutrients from the intestines goes straight to the liver, insulin is able to oppositely influence liver cells but directs the removal and storage of glucose if needed.

This diagram will hopefully show you more clearly how insulin and glucagon act together to control blood sugar level. 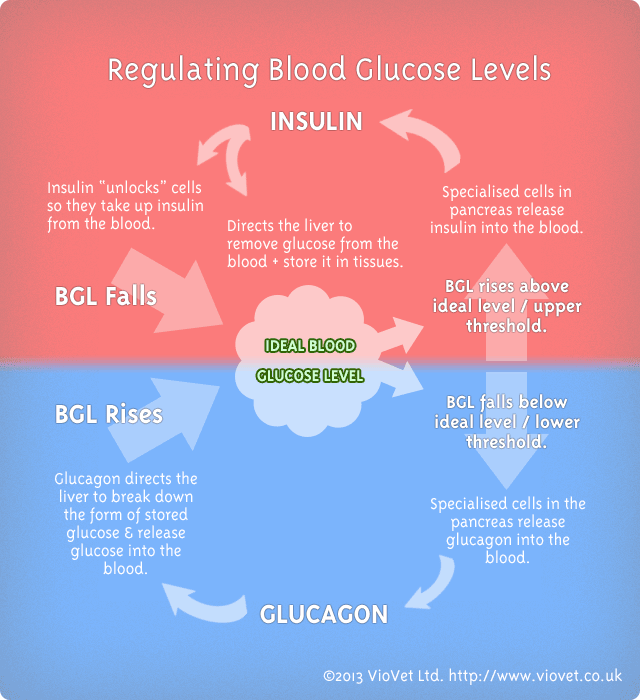 If insulin production or cell responses becomes impaired in an animal, the regulation showed on the top left hand portion would be removed, and glucose levels would stay high.

Next week's blog post will discuss the signs and symptoms of diabetes mellitus and how they relate to elevated glucose levels.

Very useful information,nice to clarify the diffrences between tye 1 and type 2.I have a diabetic cat that is on insulin.