Believed to date as far back as 74 AD, the Rottweiler is a dog of old that has its roots in southern Germany. Contrary to the popular vision of Rottweilers as fearsome guard dogs, the history of the breed is fairly placid and can be seen to reflect its inherent goodness.

When the 11th legion of the Roman Empire came to settle on the banks of the River Neckar in the Wurttemberg area of Germany, they brought with them their heavy mastiff-type dogs, used for droving and guarding.

In time, these dogs went on to breed with native dogs in the region, quite possibly Bernese Mountain Dogs, Entlebuchers and Greater Swiss Mountain Dogs – known collectively as the Sennenhunds, producing a dog that had size, strength and skill. 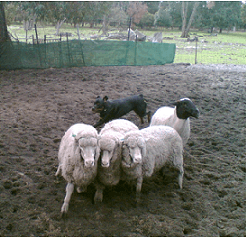 It wasn’t until some years later when the Romans lost control of Area Flaviae in the Wurttemberg region and it became ‘das Rote Wil’ and, later, 'Rottweil,’ that the dog officially got its name.

Until then, the Rottweiler was known simply as the ‘Metzhgerhund’ or ‘Butcher’s Dog.’ The red-tiled (‘rot’) villas (‘wil’) and bath houses of the little town are responsible for this name change and it seemed fitting that the chief dogs in the region also shared its name.

This versatile breed began life herding cattle, pulling heavy carts and guarding the farmstead. During the Middle Ages, Rottweilers were widely used for bear hunting and were capable of driving even the strongest and most stubborn bulls to market. At night, the dogs would hold vigil over the livestock and prevent it from straying too far. They also protected supply stocks, which were essential to a farmer’s livelihood.

With the advent of the railways in the 19th century, cattle herding was illegalised which meant the popularity of the breed suffered decline. However, this was to be short-lived as the Rottweiler soon became a favourite with German butchers who utilised the dog’s strength in pulling heavy carts laden with meat and milk.

They also accompanied the butcher to market with a money pouch secured around their neck and, when the butcher made a sale, the money would go into the pouch for the dog to guard. To fulfil this role, Rottweilers needed to have a certain look about them to intimidate would-be thieves.

Perhaps it was this early usage that gave the Rottweiler its fearsome reputation, although the original Rottweilers were also relied upon to protect children, so their gentle and dependable natures were clearly recognised early on.

In 1936, a Mrs Thelma Gray of Rozavel kennels imported her first Rottweiler to the UK, although breeding her was unsuccessful. More dogs were imported but, with the outbreak of the Second World War, they were exported to Ireland for safe-keeping. After the War, the dogs vanished without trace and it wasn't until 1953 that breeding was attempted again in the UK. The breed was officially recognised by the Kennel Club in 1965. 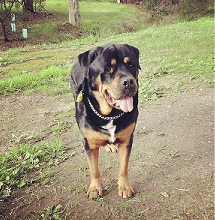 Today, proud owners describe the breed as calm and courageous with an independent mind. This makes it well suited to domestic life, providing it is shown firm leadership and early socialisation from a young age. Some dogs are prone to displays of aggression and territorial behaviours if they are not trained correctly, although the same can be said of any breed.

Across Europe, Rottweilers are now used in a variety of roles by numerous different officials. In Germany and Denmark they are popular with the police, customs and the army, while in Norway they are commonly found in mountain rescue work because of their keen sniffer senses, strength and willingness.

If you are lucky enough to own a Rottweiler, please let us know! If you like, you can visit our dedicated breed page and upload your photos there :) If you have any questions, feel free to get in touch! [email protected]

Fun facts about the Rottweiler:

- Compared with other breeds, Rottweilers are slow to mature and don’t tend to reach their full adult size until they are 2-3 years old. Despite this, their life expectancy is only 7-10 years.

- Owners and enthusiasts often describe the Rottweiler’s tendency to lean against people. This stems back to their early usage as cattle drovers, when they would employ this tactic to move the cattle on.

- It is rumoured that when breed numbers declined with the coming of the railways, there was only one female Rottie remaining in the area.

I have had Rottweiler's since 1988.Each person to their breed.The Rottweiler is mine.Two of them saved my life when armed men broke into my home in 1992.I have never seen anyone run as fast as the guy my two Rotts chased.Hilarious!