Dogs through the Ages: Part 2

As we’ve already discussed in Part 1 of this article, dog breed preferences have always changed as the demands of different civilisations and cultures favoured different types of dog.

From the agile Ancient Egyptian coursing hounds that chased quarry over difficult terrain, to the versatile Viking sheepdogs that herded on the icy Nordic landscape, dogs have always been close to our hearts and have contributed to our very survival for almost eighteen millennia.

As we move from the Tudors, whose favoured dogs included hunting breeds and small, companion dogs like the King Charles spaniel, we now consider the Victorian age, the war dogs of WWI-II and the House of Windsor, whose love of one particular breed of dog is known the world over. 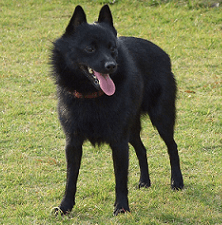 The dawning of the Victorian age heralded many positive changes for dogs in terms of welfare and breeding. It also introduced new ideas about keeping and caring for dogs and the concept of bloodline purity.

It is no secret that Queen Victoria loved dogs and is known to have owned an assortment of different breeds herself. Her favourite dog, a King Charles spaniel named Dash, very much reflected the trend of the time in appearance and size – a trend begun by the Tudors a few centuries earlier, for small 'lap dogs.'

The fashion for these ‘parlour pets’ gathered pace in the Victorian age, as more of society’s wealthy and elite began carrying dogs on their person, whether about town or in the home. These dogs could fit daintily on a lap or neatly inside a carriage. Popular choices were the King Charles spaniel, Yorkshire and Skye terriers, the Schipperke, the Maltese and the Pekingese (black was a popular colour as the hairs didn't show up on a lady's fine dress).

Having a dog was not only considered fashionable in the Victorian age, but a privilege restricted almost entirely to the upper classes. In fact, aristocratic women were rarely seen without a lap dog at their side and were often photographed with one to reflect their status and wealth. It wasn't unheard of for a Victorian woman to hire a lap dog solely for the purpose of a photograph.

The move from working dogs to companion animals or ‘pets’ was increasingly evident in the Victorian age and the focus soon switched to breeding, with people wanting to harness the favourable traits of certain dogs and breeds. The terms 'purebred' and 'pedigree' were used for the very first time and came to symbolise the nobility.

Inevitably, war shifted the focus back from household pets to working animals, as dogs were needed on the frontline. Having a dog seemed too great a privilege for many and also provided another mouth to feed in times when food was scarce. 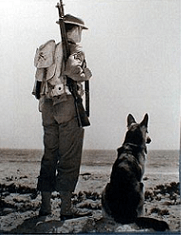 Both the First and Second World Wars enlisted a variety of working dogs, from German Shepherds and Dobermann, to terriers and hounds. Crossbreeds were also involved in the fighting, including Sergeant Stubby - perhaps the most decorated dog of the First World War. These dogs needed to be easily handled, intelligent and hardy, if they were to be of any use at all.

Progressively, people began euthanising their family dogs or volunteering them for the war effort. In fact, a blunder in national printing press during the outbreak of the Second World War led to the destruction of 750,000 British household pets in less than a week. You can read more about this here.

Dogs played a decisive role in WWI and WWII through bravery, perceptiveness and training. Many dogs were enlisted in the war effort on all sides, either as scouts, detection dogs, sentries, messengers or supply carriers. They also proved very useful in controlling vermin populations in the trenches.

When the United States joined the war in December, 1941, they travelled to France without dogs. Realising how fundamental they were to the Allied troops, not just because of their sharp senses and keen skills but because they boosted soldier morale, the British and the Belgians decided to loan trained dogs to the Americans – approximately 50,000 of them.

Not only were dogs useful on the Front, but back home they proved invaluable resources by assisting in the rescue of many civilians during the Blitz bombings.

Ever since Queen Elizabeth was a young girl, Pembroke Welsh Corgis have been the preferred breed of the royal Windsor household. They first became a favourite when King George VI brought one home from Rozavel Kennels in 1933. Its name was 'Dookie' (originally 'Duke') and it was an instant hit with the two princesses. They had fallen in love with the breed after being introduced to the Marquess of Bath's pet corgis on a visit. 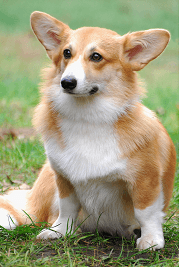 Since then, Queen Elizabeth has owned more than 30 corgis, although there have been a number of other dogs at her residences during her reign, including cocker spaniels and dorgis (dachshund-corgi crosses). In 2007, a total of 14 dogs were housed at Buckingham Palace - five corgis, five cocker spaniels (historically, another noble dog) and four dorgis.

Today, the Queen has reduced her number of companions significantly and now owns just two corgis, named Willow and Holly. The pair appeared alongside the Queen and Daniel Craig in the Olympic opening ceremony video.

After the Duke and Duchess of Cambridge acquired Lupo, a beautiful black cocker spaniel pup, demand for the breed soared, especially on the black market. This resulted in a spat of targeted thefts, as people tried to get their hands on a replica royal dog.

Gundogs like the spaniel have always been a popular choice with royalty, something the Tudors demonstrated in the 1500s. While they are far cry from the dainty lap dogs of the Victorian age, they are also a long way from the larger hounds used by the Ancient Egyptians around 3000 BC.

Today, the UK is home to a variety of dog breeds and their mixes, from spaniels and retrievers, to terriers and hounds. Of course we all have our favourites but, generally speaking, our modern preferences are fairly encompassing. That said, regional factors still play a big part in the types of dogs we favour. Is a particular breed of dog prevalent in your area? Have you always favoured one breed over others? Please get in touch and let us know! [email protected]