6 May 2015
Posted by Hannah in Pet Discussion

The Lowchen or ‘Little Lion Dog’ when translated from German, is a distinctive breed with an uncertain history. Precious little is known about the dog’s early origins but there are many theories in circulation. The most common belief is that it first emerged in Europe in the mid-1400s, as similar depictions have been found in artwork and literature from the period.

The Lowchen is easily recognised for its mane-like coat, clipped forequarters (a traditional style of grooming, rather than a natural birth trait) and high-set tail, giving it the literal appearance of a miniature lion. Some suggest it is closely related to the Bichon, while others attribute its ancestry to ancient Tibetan dogs. The Poodle, various terriers and the Mediterranean Barbet, are also credited with influencing its development.

Germany is generally regarded as the birthplace of the Lowchen, a belief that stems almost entirely from its German name, where it was once popular with the wealthy and elite. From here it travelled to France and Spain where it enjoyed a modest following as a ‘lap’ dog. However, the exact origin of the Lowchen is controversial and many countries lay claim to it, including those across Europe and as far afield as Tibet. 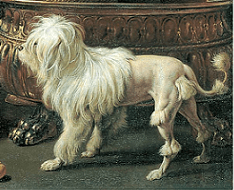 From artwork, it is evident that during the 17th and 18th centuries, Lowchens were a popular feature in French castles as ladies’ companions, accompanying them on their rounds, in their carriages, and even in their beds to warm their feet at night. Plentiful evidence depicts these half-haired little dogs in the laps of their masters, indicating that the traditional lion-clip has been around for centuries.

This traditional style made the dog an excellent hot water bottle, warming the laps of aristocratic women on cold days. The long, mane-like coat was also used to attract unwanted parasites, keeping them away from the lady and her fine clothes. While it sounds fairly repugnant, it clearly worked well as the dogs were utilised in this way for some time.

Another favourable trait of the Lowchen was its 'non-shedding' coat, which rendered it perfectly suited to the role of lady's companion. The last thing a noble woman wanted was a shedding, scruffy dog leaving hair all over the expensive clothes and furnishings. Their coats were also considered hypoallergenic, making the Lowchen a good choice for people with allergies. In many ways, the stylised Lowchen was the lap dog of dreams.

Lowchens were eventually imported all over the world, although they maintained their popularity in Europe. Before long, restrictions on ownership were lifted and ordinary townsfolk and farmers could keep one. They proved efficient vermin catchers and assisted in a range of tasks around the homestead, from pest control to guarding. Lowchens also possessed a natural affinity with water, so were able to work with fishermen retrieving their nets and bringing their produce to shore. In fact, many believe this is how the breed actually evolved. 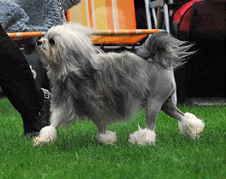 Unfortunately, as was the fate of many dog breeds in history, the popularity of the Lowchen didn't last forever. The needs of working men changed, so their dogs had to too. Slowly but surely, the breed declined, until it was one of the rarest in the world. The onset of WWI led to even greater decline in numbers and the Lowchen faced the very real threat of extinction.

It was purely thanks to the careful breeding efforts of Madame Bennert, a lifelong admirer of the Lowchen, that it emerged from the brink at the turn of the century. Bennert's passion gave her the resolve to save the breed by searching far and wide for a good breeding pair with which to begin her kennels. Eventually Bennert came up trumps and undertook the serious task of breeding them. It is believed that every existing Lowchen can be traced back to these original parents.

If you are fortunate enough to own a Lowchen, please let us know! If you like, you can visit our dedicated breed page and upload your photos there :) If you have any questions, feel free to contact me directly: [email protected]

Fun facts about the Lowchen:

- Various names have been used for the Lowchen depending on the century, including the Shoshundle, Gutchen Hund, and Petit Chien de Lion.

- In the early 1960's, the Lowchen was named the 'rarest breed in the world' in the Guiness Book of Records.

- Because the Lowchen was considered a noble dog/dog of royalty, it was almost destroyed in every European conflict - the French Revolution, for one.

What a lovely writeup on this my most favourite breed. I'll be uploading pictures of my two!

Nice to see the breed get a mention