Dogs through the Ages: Part 1

Evolving from wolves some 18,000 years ago, dogs have always held a special place in our hearts. They might be part of the same species, but dogs come in all shapes and sizes and have developed unique traits that set them apart from one another based on where they evolved and the purposes they were originally bred for.

Today, the UK is home to a variety of dog breeds and their mixes, from spaniels and retrievers, to terriers and hounds. Of course we all have our favourites but, generally speaking, our modern preferences are fairly encompassing. That said, regional factors still play a big part in the types of dogs we favour.

This has always been the case throughout history, with a focus being on developing and improving certain types of dog to fulfil the needs of different communities and cultures. At one time or another there were breeds that simply didn’t exist, while others ruled supreme in every corner of the region. 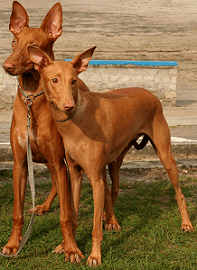 So, let’s go back in time and look at the types of dog that were popular then and now, from as far back as 3100 BC, right up until the 21st century.

It is no secret that the Ancient Egyptians had dogs. Just look at Anubis, their jackal-headed god. In fact, look at the multiple references made to them in records, engravings and the hieroglyphics of Egypt’s ancient pyramids. These dogs, all of a certain appearance and build, clearly weren’t just popular but were sacred too.

The Saluki, for example, is widely depicted in ancient visuals and is one of the most historically referenced breeds in the world. Mummified Saluki remains suggest these dogs were thought of as sacred gifts that were often buried in the customary manner of the pharaohs.

The same applies to the Greyhound, Basenji, and the Pharaoh and Ibizan hounds, which all share similar characteristics. From this, is it evident that the Egyptian interest was primarily in coursing hounds and hunting dogs – dogs that served an important purpose, yet showed grace as well as function. Sacred and royal, it was important that they also looked the part.

It is the belief of historians that these dogs represent the earliest examples of dogs specifically bred for purpose, to fulfil the specialised roles of coursing gazelle and hare over difficult terrain. Not only did the Greyhound/Saluki boast keen senses, its large heart, fast-twitch muscle and flexible spine allowed it to change direction at full speed.

Fast forward a few thousand years to the Viking era of AD 800-1066 when the focus moved to smaller, more tenacious dogs. Everyone knows about the Viking obsession with raiding, trading and pillaging, but what about their favourite dogs?

Well, for a start, they needed to be small. Large dogs could assist in battle, yes, but they would've been much harder to carry on the Viking longboats and also needed to consume a lot more food. Unlike the Egyptians who needed light, able-bodied dogs that could withstand and work in a hot climate, the Viking's primary interest was in breeding resilient, thick-skinned dogs capable of herding on the harsh, Nordic landscape. 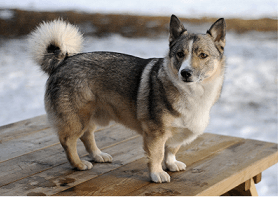 These were rural, working dogs, as opposed to sacred dogs to be admired. That said, they were highly valued in their culture, evidenced by the large numbers found at Viking burial sites.

In keeping with the Norse way of life, their dogs needed to be fearless and versatile, as well as having the intelligence to herd, control and protect flocks. They also had to be good family dogs that could be relied upon to protect the children.

Sheepdogs and spitz-types were the Viking's preferences, including the Icelandic Sheepdog, the Norwegian Elkhound and Buhund, and the Swedish Vallhund and Lapphund - dogs that are referenced as far back as 6,000 BCE.

The Ancient Egyptians and the Scandinavians shared similar beliefs regarding dogs and the deceased; both believed that dogs were the guardians of the underworld, which is probably why so many were buried alongside their masters. It is thanks to this very custom that we know so much about the dogs' histories today and can date their early existence.

By the time of the Tudor reign, the idea of 'pets' as opposed to 'property' was more commonplace in England, although they were largely restricted to the nobility. Those that could afford a dog, had one for the purposes of work rather than for pleasure. For many people of the time, pets were an expensive and fruitless privilege. An exception to this were the royal court and household, who were divided in their interests when it came to dogs. 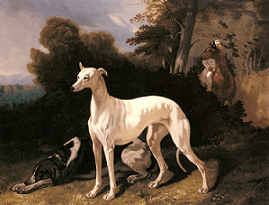 Hunting dogs were a necessity on the royal estate, as hunting was a popular and ancient pastime enjoyed by many. Greyhounds were commonly used for this purpose, along with mastiffs, bull-breeds and spaniels. Greyhounds held symbolic value, being depicted in the Tudor Coat of Arms.

The dogs had to be big enough to hunt large game and scare off poachers, hence why the bulkier bull-breeds were often used. By this period, hunting was less about the demand for food, and more about recreation and enjoyment, so dogs that were perhaps less efficient but more easily handled were chosen.

Hobbies like this reflected enormous power and wealth and keeping dogs specifically for this purpose, demonstrated just how powerful and wealthy the Tudors were. Greyhounds were skilled and regal, so made perfect additions to the estate.

However, there was also a leaning in the period towards smaller 'lap dogs,' which provided companions for the women of the royal household. Big dogs were considered undignified and couldn't fit so easily on a lap or in a carriage. Spaniels were the favoured dog for this role, as they were compact, docile and pretty.

From paintings of the time it is accurate to suggest these were early King Charles Spaniels and, evidently, Henry VIII and both his daughters owned them. The Tudor love of toy breeds also extended to pugs and bulldogs - breeds whose popularity continued to soar through the ages, never more so than in the next period we discuss (Part 2)...

If you have any thoughts on this discussion, please comment below! Feel free to contact me directly with any further questions and/or suggestions for future blog posts: [email protected]

You article on dogs through the ages was very interesting more please thank you Miranda hicks.

What an interesting article. I have like the Egyptian and Tudors always admired the greyhound, I believe it to be the least genetically changed breed. Its such a travesty that the current day regard to them is much less. A big thank you to the Retired Greyhound Trust for all the work they do, I am now lucky enough to own two elegant gentle greyhounds.

Very interesting & Can't wait to see where & when the Terriers - "Terrierists" - came in & became popular.