The Secret Life of Cats

Today, cats are one of the UK’s most popular pets, present in 18% of households. ‘Independent and loving’ is a description commonly given to the domestic cat and, these days, more and more people are choosing them as companions.

But, unlike dogs, cats lead very self-sufficient lives. For years, their behaviours beyond the Cat flap have intrigued researchers, enthusiasts and owners. When they’re not at home, where do they go? And what is the purpose of their daily jaunts?

Understanding the secret life of cats has been the subject of focus for many and, only recently, the BBC made a documentary that examined the curious routines and behaviours of domestic felines. The programme asked the questions we all wanted answered – just how far do our cats travel when they're not at home? And what exactly do they do on these excursions? 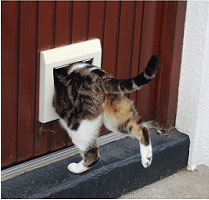 The team used GPS tracking equipment to monitor the routes taken by 50 domestic cats in a community. Each cat was then allocated a bright tracking colour which displayed on-screen for the researchers to follow. The results revealed what many owners had long suspected – that their cats actually stayed fairly close to home.

Of course there were exceptions – some cats roamed miles to hunt, visit a neighbour’s house for food or rendezvous with a love interest. The home range of a handful of cats extended miles and took them through woodland, over farms and between gardens. While some cats were most active during the day, others went about their business at nightfall.

Naturally, many cats returned with souvenirs from their evening hunts, including voles, rabbits and one even came back with a mole! With senses so acute they can distinguish the position of sounds from 30ft away, prey really does have a hard time in areas with high cat residency.

By monitoring the tracking board day to day, it soon became apparent to the researchers that different cats were patrolling the same areas at different times. This suggested that cats do, in fact, work on a shift system, which allows them to roam freely at certain times of the day.

If two cats happened to be patrolling the same areas at the same time, stand-offs and fights occurred. The owners reported hearing screeching and scrapping when two cats came to blows.

However, not every cat favoured a solitary life. One multi-cat household in the study showed surprising results when their 6 GPS trackers were monitored. All except one cat stuck very close together, patrolling the same area at exactly the same time. Far from being hostile or territorial towards one another, the cats were happy to play with and groom each other and altogether displayed very close bonds. 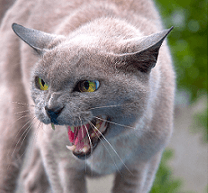 After attaching purpose-built cameras to the collars of a select few cats, researchers gained even greater insight into their daily activities. It was revealed that one cat went back and forth long distance to a particular tree which housed a bird's nest, waiting patiently on the branch for the chicks to poke their heads out.

Another paid evening visits to a neighbour's house for food, entering through the cat flap and bravely trespassing the home range of the cat that lived there! If you have similar problems with stray cats entering through the cat flap and eating your pet's dinner, why not try the SuperFlap cat flap, which identifies your cat by its unique microchip.

One cat seemed to deliberately trespass the boundary of another cat's home turf every night - an encounter that usually resulted in a fierce stand-off, which could be heard at the end of the road.

It was clear from the study that each cat had a territory it wanted to protect, which usually covered the area directly surrounding its house. If other cats entered this zone, they did so at their peril or when the chief patroller was away. Generally speaking, the unspoken shift system that was evident from the camera tracking, seemed to work, and cats came and went accordingly.

Some cats roamed in the same direction every day and had definite routines, while others just seemed to wander aimlessly within their home range. Whereas a handful of cats seemed to get along and even interact, others led solitary lives and liked to keep it that way!

If you watched the BBC documentary, let us know your take on it. We would also love to hear what your cats get up to when they're inside or out, so please get in touch! Feel free to comment below or email me directly: [email protected]

My cat Toffee is a very homely cat, he doesn't like going out too often and if he does he only goes in the vicinity of our garden so I know where he is all the time. He loves lounging about and sleeping, also eating. He is very affectionate and loves our company, he roams around the house and loves sitting on our bedroom window sill in the sun. He does have occasional bursts of energy where he sprints around the house at 100 miles an hour but other than that he is just my lovely cuddly gorgeous pussy cat and I love him to bits.