When it comes to pinpointing the true origins of the Dogue de Bordeaux, there are many theories in circulation. Some sources believe it came about from crossing between Tibetan Mastiffs and Molossus of Greece (an ancient and extinct breed of fighting dog); while others speculate the history of the Dogue de Bordeaux is deeply rooted in Rome.

The breed’s name would suggest that it actually hails from France – a theory with evidence enough to support it. During the 12th century, the Aquitaine region of south-western France was ruled by the English, whose mastiff-type dogs had accompanied them from abroad.

It is possible that these dogs went on to breed with native dogs in the region, producing a dog that strongly reflected today’s Dogue de Bordeaux. Other sources suggest that the Dogue was already well-established by the Middle Ages when the Romans occupied the region. Bulldogs and Mastiffs (Tibetan, Neapolitan and Bull) are the likely ancestors of the Dogue, although its appearance has evolved greatly since the Middle Ages. 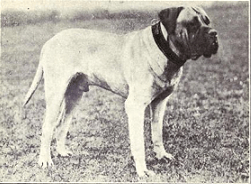 Its head, for instance, was originally bred to be huge, a trait which greatly hindered its mobility and function. Today, the head remains ‘large’ but reduced, in accordance with its pedigree blueprint. The Dogue also traditionally had cropped ears, which gave it a formidable appearance, not dissimilar from the Cane Corso (a breed that is now banned in the UK).

Historically, the Dogue was bred for guarding and hunting on large, French estates, as well as being used to herd cattle and, on occasion, bait bulls, thanks to its fearsome look and powerful size. Noble figures were often accompanied by their Dogue de Bordeaux, or personal protection dogs, when about town or patrolling their estates.

The dog’s association with the aristocracy didn’t work entirely in its favour, however. During the French Revolution, many ‘noble’ dogs were slaughtered for their royal connections, including the Dogue de Bordeaux and several other breeds. For the Dogue, this meant dangerously depleted numbers and posed the very real threat of extinction. Fortunately, many lower class households also owned a Dogue, so fewer of them perished compared to other noble breeds.

The early temperament of the Dogue de Bordeaux is debated, although it is thought to have shown loyalty, strength and obedience in all duties, albeit following its master into battle (the ancestral Molossus was the dog of the Roman Army), protecting the herd and homestead from thieves, and guarding the children. Today, owners and enthusiasts describe the Dogue’s strong protective instincts and gentle, affectionate nature.

Before the 1800's, very little was known about the breed outside of Bordeaux. In fact, the name itself was unheard of before 1865 and, even then, many continued to refer to it as the 'French Mastiff.' After this time, the Dogue de Bordeaux was exported throughout Europe as agriculture spread. It wasn't until the 1960's that a group of enthusiasts began trying to standardize the breed and, in 1970, a new blueprint was written. However, slowly but surely the popularity of the Dogue declined as the French began favouring other breeds. 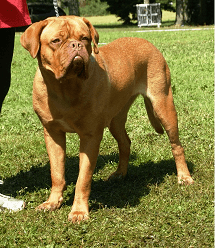 With the outbreak of WWI and WWII, the Dogue de Bordeaux was threatened further, something which was no different for any other breed of the time. Numbers fell dramatically and it was only due to the careful breeding efforts of a few individuals that the Dogue didn't die out altogether. The modern Dogue de Bordeaux is no longer bred to guard, fight or hunt but is primarily seen in the domestic setting.

If you are fortunate enough to own a unique Dogue de Bordeaux, please let us know! If you like, you can visit our dedicated breed page and upload your photos there :) If you have any questions, feel free to contact me directly: [email protected]

- Unbenownst to many people, the dog in the Tom Hanks film, 'Turner and Hooch,' was in fact a Dogue de Bordeaux named Beasley.

- Despite being a generally healthy breed, the Dogue's life expectancy is roughly 5-6 years - much shorter than other breeds.

- The Dogue de Bordeaux is credited with helping to create, improve and re-establish several other breeds, including the Tosa Inu - a Japanese fighting dog, and the Dogo Argentino.