The dangers of keeping rabbits and guinea pigs together

People tend to think of rabbits and guinea pigs as one and the same thing but, in actual fact, their needs and behaviours are very different. Pairing the two in a hutch or run is often disastrous and needs to be attempted with caution, if it is attempted at all. 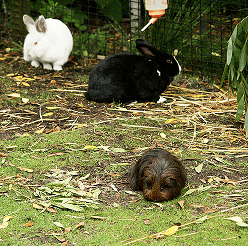 In the past, rabbits and guinea pigs were kept together for companionship when neutering bunnies was considered unsafe. Nowadays, fixing a rabbit is the norm, meaning you don’t have to substitute a rabbit playmate for a guinea pig anymore.

Housing the two together can be dangerous, especially in close quarters. If you’re not careful, it can also be detrimental to happiness and health as rabbits and guinea pigs have very different needs.

The RSPCA recommends that if your single rabbit needs a friend; adopt another rabbit rather than trying to befriend it to your guinea pig. Here’s why:

When a rabbit and a guinea pig live together, it can be tempting to fill up a bowl of food and leave it there for them to share. By doing this, you are only catering to one of their dietary needs and have no way of knowing who is eating what. Rabbits are also notorious for bullying guinea pigs away from the food bowl, preventing them from getting the nourishment they need.

Guinea pigs can easily become stressed and will look for places to hide away. It is important to provide for this with a house or shelter that has an entrance big enough for guinea pigs to enter, but not rabbits. If you see your guinea pig being bullied or notice it is losing condition or weight, separate the pair quickly. 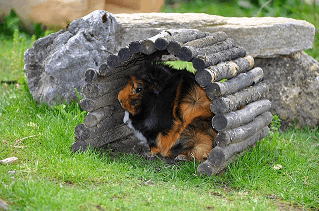 This is far less of an issue when there are several animals living together i.e. an even mix of rabbits and piggies, as both will have someone to ‘talk to.’

Rabbits also have very sharp claws which, if they wrongly strike a guinea pig’s face, can cause corneal ulcers, blindness and infection. It is not unheard of for rabbits to also try and mate with guinea pigs, something which, again, can cause serious injury to the back and could even result in death.

That is not to say that rabbits and guinea pigs should be separated if they are already housed together and have an established friendship. Some pairings do work, and breaking them apart can cause more problems than it solves.

If the enclosure is big enough or your pets range freely, rabbits and guinea pigs can co-habit with fewer problems. In fact, I have heard of them living side-by-side quite happily, alongside chickens and ducks as well. However, the RSPCA's advice is to keep rabbits and guinea pigs separate. Be sensible and if you suspect a problem with the housing arrangement, it is best to keep your pets apart. For all small animal products, including hay, treats, bedding and toys, have a browse through our wide range of items.

If you have any comments on this discussion, please post them below or email me directly: [email protected]

I have run a piggy sanctuary for very many years and have taken in several piggies who have been hurt by being kept with rabbits so I was delighted to read your article.

I have tried to educate people on the dangers of keeping piggies with rabbits and I hope that your article reaches a wider audience.

Their nutritional needs are so different but people seem to think that a bowl of rabbit mix is sufficient for both animals.

A piggy needs a friend who is also a piggy. A rabbit needs a rabbit companion.