The Saluki or ‘Arabian Greyhound’ is a dog of old – in fact; it is heralded as one of the oldest dogs on the planet. Believed to date as far back as the Egyptian tombs of 2100 BC, the Saluki was once proclaimed the ‘Royal Dog of Egypt’ and could often be found mummified alongside the Pharaoh. In keeping with its history, the Saluki remains popular throughout the Middle East today and is still revered for its keen skill and majesty.

Understanding the history of a dog that originated centuries ago is challenging, although there are strong indications that the Saluki began life in the Middle East and travelled as far afield as the Caspian Sea and China. The ancient nature of the Saluki’s history means it is heavily referenced in engravings, paintings and records, which detail a dog of athletic build with an elongated face and a feathered coat. The Saluki truly is a sight to behold and is very often likened to the Afghan Hound in this regard. 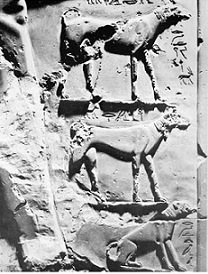 The Saluki is seen in many cultures and is thought to have migrated with early nomadic tribes from Iran (originally Persia) to Egypt and as far east as India and Afghanistan. Perhaps the earliest sighthound on Earth, a Saluki would accompany the hunters for food and would successfully course hares, gazelles and jackals over difficult terrain. Noted for its speed and fearlessness, their was no better dog for the job.

It is perhaps unsurprising that the Saluki became a popular choice with rulers and nobles who desired a dog with grace and yet grit and endurance. The Saluki offered both, with its striking appearance that befitted royalty and its symmetrical, well conformed body.

The breed's disproportionately large heart, fast-twitch muscle and flexible spine meant a Saluki could change direction at full speed without losing momentum. To secure the kingdom's next meal, this was exactly what was needed.

From the vast amount of historical references made to the Saluki, it is evident that many thought highly of the breed (they were associated almost exclusively with the royal and noble) and wanted to preserve an impression of it both in stone and on paper.

Not only this, but mummified Saluki remains have been uncovered in the Upper Nile region, suggesting that these dogs, thought by many to be sacred gifts, were buried in the customary manner of the pharaohs. In modern times, the Saluki continues to appear beside figures of royalty, including Sheik Hamad ibn Al Khalifa, King of Bahrain, who, in the 1930s, was known for his extravagant hunting trips that included his famous pack of Salukis.

Although modern breeding didn't officially begin in the west until the 1800s, there is evidence to suggest that the Saluki appeared in Europe as early as the 12th century when soldiers returned from the Crusades, bringing middle eastern dogs with them. A later painting (1514) featuring Henry IV, Duke of Saxony, reveals a dog aligning with the Saluki at his feet, further supporting the dog's associations with nobility and implying a much earlier introduction for the breed to Europe. 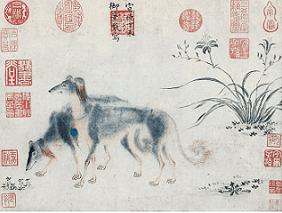 In 1895, the first successful modern breeding of Salukis took place. During a Nile tour in that same year, Florence Amherst fell in love with the breed and decided to import a beautiful pair from Egypt. Later dogs began appearing on the return of British officers from the Middle East who couldn't bear to separate from their canine comrades after the war. Enthusiasm for the breed developed fast and demand came from all over the world.

All this good work was nearly undone, however, with the outbreak of the Second World War. As with most breeds, the war diminished breeding stock catastrophically and threatened extinction. It was purely thanks to the careful efforts of a handful of enthusiasts that the Saluki survived and was gradually able to recuperate from such major losses.

Today, the popularity of the Saluki fluctuates (due, in part, to the breed's relative rarity), although its merits remain unaltered. If you are fortunate enough to own a stunning Saluki, please let us know! If you like, you can visit our dedicated breed page and upload your photos there :) If you have any questions, feel free to contact me directly: [email protected]

Fun facts about the Saluki:

- You already know that the Saluki is one of the world's most historically referenced dogs, but did you know that it also has connections with the Bible and the Koran?

- The Saluki is the sports mascot for Southern Illinois University and Red Hill High School, Illinois. It was chosen for its speed, skill and even temperament.

- Some describe the Saluki as the 'cleanest dog of all' because of its non-shedding coat - perhaps another reason why it was a favourite amongst royalty.

- While the Greyhound is known for its speed over short distances, the Saluki is believed to be the fastest over distances of 3 miles.