Headshaking - what is it and why is it affecting my horse?

Headshaking in horses is a common problem and one that is still largely misunderstood. In the past it’s been considered many things, from a behavioural syndrome, to more serious neurological disease.

Nowadays, it is widely believed that headshaking is caused by facial pain, resulting in violent jerking and thrashing of the head. In roughly 98% of cases the problem is ‘idiopathic,’ meaning the cause is unknown. This makes treating the problem next to impossible and presents a huge challenge for owners of horses whose headshaking is severe.

In some cases, the degree of the problem is tolerable and can be managed, while in others it is severe and distressing.

In cases of headshaking, the Trigeminal nerve (which runs along the face) is repeatedly triggered, whether by damage or environmental stimuli, and over time, this repeated nervous triggering lowers the threshold in which the brain perceives pain, leading to a disproportionate response. Subsequently, the slightest thing will trigger severe facial pain, resulting in mild to violent headshaking. 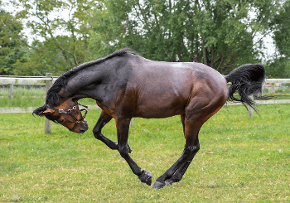 The condition usually has a sudden onset and becomes progressively worse over time. Some headshakers are affected by seasonality and will present with symptoms at a particular time of year. Others have intermittent headshaking that comes about under defined conditions, such as exercise, wind, warmth or bright sunlight, amongst others.

How can I distinguish headshaking from other conditions?

Unfortunately, headshaking can’t be cured, but often it can be managed by identifying the trigger factor. Reaching a diagnosis of ‘idiopathic headshaking’ requires eliminating all possible triggers through diagnostic tests and referral to a specialist, and is much less receptive to management strategies.

If you have any experience of dealing with this condition, feel free to comment below and share it with our other readers.

My gelding seems to be affected with quite violent head shaking from the end of March til end of September- vet said maybe coincides with tree pollen. Iâve found giving him Global Herbs Pollenex during this time enables him to continue in ridden work with virtually no head shaking.

Respimin Respiratory Supplement for Horses
from £37.49

Hilton Herbs Shake No More Gold for Horses
from £25.99

Gold Label Allergeze Plus for Horses
from £14.49

CLOP Liquid Garlic for Horses
from £9.99