9 May 2017
Posted by Hannah in Dog Health & Wellbeing News

When it comes to serious canine conditions you should be aware of, bloat and gastric torsion are high on the list.

Though the cause of this disease is often a mystery, the signs and symptoms are easy enough to recognise, despite being fairly consistent with other conditions. It is important that you do take the time to familiarise yourself with the symptoms so you can seek treatment for bloat immediately.

Why the condition happens is not fully understood by vets, but it is characterised by the stomach filling with gas (bloat) and twisting (gastric torsion). Sometimes the stomach becomes so distended that it puts pressure on the diaphragm, causing breathing problems and cutting off blood flow to the heart. 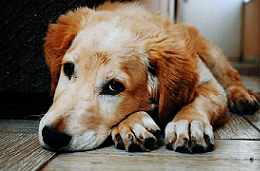 Occasionally the pressure inside the stomach becomes so great, and blood flow so restricted, that stomach tissue dies off, leading to ruptures in the stomach lining. In other cases, the spleen twists with the stomach, causing extensive damage to this organ.

It is easy to see why immediate treatment is essential in suspected cases of bloat and gastric torsion. Even with treatment, it is estimated that as many as 30% of affected dogs will die.

Bloat can either occur on its own, or as a precursor to gastric torsion.

Owners of affected dogs tend to report feeling ‘something isn’t quite right’ with their dog in the early stages of the condition. A dog may appear particularly anxious or distressed, may pant, pace and generally appear restless, repeatedly turning to look at its flank or abdomen.

As the condition progresses, further symptoms will include excessive drooling, unproductive vomiting, and visibly distended abdomen that is tender and taut to the touch.

In dogs with bloat without torsion (gas has accumulated in the stomach but not caused it to twist), symptoms can last for minutes to hours. This form of the condition is less life-threatening and easier to treat, although immediate attention still needs to be paid. In cases where torsion occurs, a dog will deteriorate rapidly, even within minutes, and may quickly go into shock.

How is bloat prevented?

Although bloat has presented in just about every breed of dog, large, deep-chested breeds are far more susceptible to the condition.

This is due to their anatomy and the increased angle of the stomach in relation to the oesophagus. In dogs with deeper chests and deeper abdomens, over time the gastric muscles are stretched and weakened, meaning they are more likely to twist. This stretching also allows the stomach to descend further into the abdomen, promoting bloat. 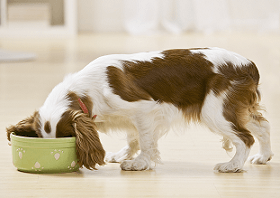 As dogs age, the gastric muscles are increasingly weakened, which heightens their overall risk.

These factors can’t be prevented, but aspects of environment and care can. There is evidence to suggest that the following dogs are more susceptible to bloat than others.

Feeding smaller meals more often, restricting vigorous exercise and water intake directly after a meal, and trying to slow the feeding process down (slow feeders are available), are all ways to help reduce your dog’s risk of bloat, although there are no guarantees that doing this will remove the risk entirely, as the definitive cause of the condition remains unknown.

If your dog has ever experienced bloat or gastric torsion, please comment below and share your stories. What were the first signs? Had you done anything differently that day that may have caused it? The more people that know about bloat, the more dogs that can be saved from it!

I lost a 4 year old greyhound to the awful bloat. I had no idea what was wrong with my beautifully. Girl. She started panting and pacing the room and did seem very restless, it was just before bedtime and she did seem to settle so we let her lay down in the kitchen on her bed. By 2 .00 am she was breathing very heavily and tried to come,it. We tel honed the emergency vet but by the time we got there just 5 miles away she had collapsed and the kindest thing to do was put her to sleep her but was twist d and. In effect. Her intestines had twisted and died. I don't really know what caused this but my rescue greyhound I have now [ he's nearly 14] always has an egg cup in his feeding bowl to slow down greedy gobbling of food. He has two medium sized meals a day. Eats off a raised stand to stop him taking down air and always rests an hour before and after eating. Bloat is a terrible thing and I wish I had known more about this terrible condition, I might have been able to save my other dog.

Our first Weimaraner developed bloat and torsion just before his second birthday. Our daughter took him out to relieve himself and she said he all but blew up in front of her. He began wretching and his stomach began to swell. We tried to calm him and gently rub his abdomen. Because Weimys are know to be a vulnerable breed, we contacted the vets immediately, despite it being 9pm ish. This led to a long night at the surgery and the next day transferring him to our own vets for observation.
Thankfully, having been treated quickly, and being in very good health otherwise; he made a full recovery. The vet also performed a 'belt loop gastropexy', which secures the stomach to the wall of the abdomen. Thus reducing the risk of torsion in the event of another bloating episode. Though your dog is still at risk of both.
We spent hours trying to decide if there was anything different that day that would cause him to bloat but it's all very subjective. We were getting ready to go out for the evening and leave him with parents and kids, but it certainly wasn't the first time. So distress isn't our first thought for a cause. Because we knew of the likelihood of bloat we had always been careful with food, water and excersize. So it's a mystery. Digby went on to recover very well, and lived until he was 9.
We have since adopted another Weimy and have had to buy a slow feeding bowl, as he's such a guzzler. To date, at 17 months he is doing very well.

I am an experienced Basset Hound owner, one of the breeds notorious to bloat . Luckily I have never had to deal with bloat during the years I have had Bassets, due to a large extent, I believe, to the fact that I always use a raised feeder (or high dog bowl stand) for both water and food and NEVER exercise the dog for AT LEAST 2 hours after a meal. The raised feeders are readily available and reasonably priced from most Pet Food stores.

Hi, my dog suffered from ilius after and general anaesthetic. This demonstrates as extreme bloating and discomfort- and is thought to be caused by the digestive system and bowel 'going dormant' following a general anaesthetic. I got her to the vets quickly and she was well again within 2-3 days. To note that I have had 2 dogs in the past 10 years that swallow air, apparently not triggered by anything - they just sit and gulp then swallow large amounts of air making them fill with air in their stomachs. A mystery indeed as to why they do this...

My 11 year old boy, a Rhodesian Ridgeback, suffered GDV three weeks ago. Thank God I have been very savvy about bloat and knew immediately when it started and just phoned my vets and ran (Sunday lunchtime of all time. Always, always know if your vet has 24 hour emergency cover). He had a gastropexy but also had to have his spleen removed. Thankfully, because I got him to the vet so quickly, there was no necrosis of his stomach or his intestines. All things considered he is doing very well, though I am aware of the consequences.
I brought this boy home when he was 7 years old, and fed him a good quality kibble from a slow feed bowl. He also got natural yoghurt every day. He had often had a very smelly stomach so I would say that his digestive system was not 100%. (He is now on Forthglade complete).
On the morning in question, he had eaten his food in the morning as normal. He had gone outside sometime afterwards (grass in his stomach contents) and then come back in and started to play with my other ridgie in the lounge. This was about an hour after his meal. He then stopped and dry retched. That was when all alarm bells went off.
I still don't know what bones to pick from his case, but it could have been that he had a full stomach, he was having problems with the comfort of it (grass) and Ridgebacks play rough.