This year has been a great year for the VioVet blog. The year has seen a large increase in the number of people visiting and engaging with our page - with articles that aim to offer useful information, advice and care tips regarding the health of your pets, as well as discussing topical issues you might have heard of in the news - a trend we hope will continue next year too! We have also seen more and more people interacting with these discussions through comments posted on the page, which only go towards further helping our other readers!

Here we take a look at the 'Top 10 Blog Posts of 2014,' (the ones our customers found most interesting to read about!) Feel free to comment below, email me directly: [email protected], or make suggestions for future blog posts in the box at the bottom of this page :)

Cystitis is a common complaint affecting cats. The term cystitis roughly translates to “inflammation of the bladder” and is sometimes referred to as Feline Urologic Syndrome (FUS) or Feline Lower Urinary Tract Disease (FLUTD). While most cases of human cystitis are a result of infection, cats are more prone to stress-induced cystitis.

Cystitis occurs when the urinary tract becomes inflamed and blocked. Urethral blockage can be the result of a bladder stone (urolithiasis), bacterial infection or a build up of struvite crystals. Most cats affected by cystitis suffer from ‘idiopathic interstitial cystitis’ or ‘sterile cystitis,’ meaning the cause of the complaint is unknown. If your cat has been experiencing stress for whatever reason (i.e. you have recently moved house, had building work carried out, or introduced a new addition to the household), alleviating the cause of the stress is the best starting point in addressing the problem...(Read on)

#9 Why are people stealing gundogs?

In 2012, gundog theft occurred on a grand scale across the UK. Some 3,500 dogs (Shooting Times Magazine) were reported stolen from homes, outhouses and kennels during the shooting season, prompting nationwide panic in rural, working-dog communities.

This year, the figure for stolen and missing gundogs is set to rise, with an average of 75 dogs being taken every week. Despite organisations such as DogLost being established to try and curb gundog theft by raising awareness of the issues and reuniting stolen dogs with their owners, there has been minimal to no reduction in the crime. Whilst these might be working animals, they are still dearly beloved companion dogs whose abduction causes untold heartache to their human families...(Read on) 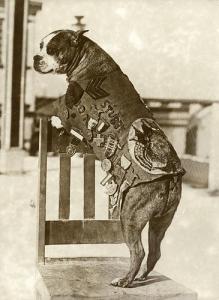 A century on from the Great War and here we take a look at one of its most decorated heroes. You may have heard of Sergeant Stubby – the Pit Bull/Boston Terrier mix that started out life as a stray and became the first and only dog to achieve the rank of sergeant during the First World War.

Named for the chopped appearance of his tail, Stubby spent his early life roaming the streets of Connecticut, USA without home or purpose. After wandering through an army training session at Yale University in 1917, Stubby was befriended by the soldiers and taken under the wing of one Corporal Robert Conroy. Such was their friendship that when the time came for the men to deploy to the Western Front, Corporal Conroy smuggled Stubby onboard the SS Minnesota in a coal bin, breaking a number of rules in doing so...(Read on)

Winter is here and we're wrapping up warm and turning on the heating. We all know the feeling of stepping outside and the shock of cold air hitting our face and lungs; some of us love it but others shiver at the thought of leaving the house! I recently brought home my first kitten and although she was born on a farm and her first few weeks of life were in a stable, she suddenly has no interest in venturing into a muddy garden- snuggling in my dog's pre-warmed bed is much more appealing, until he bounds back in with soggy paws anyway!

Our pets' reactions to winter weather will vary between individuals but whether they are going out for a toilet trip or a frosty walk with us, there are things we need to bear in mind during adverse weather conditions...(Read on)

Gastric dilatation-volvulus (GDV) is a condition all dog owners know about and fear. Otherwise known as bloat or gastric/stomach torsion, the condition onsets quickly and can be fatal if left untreated. While it can affect any dog, it is far more prevalent in deep-chested, large breed dogs. 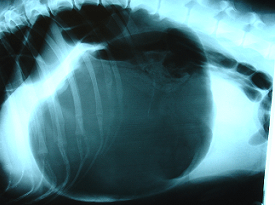 #5 How much exercise does my dog need?

Puppies of any breed require far less exercise than their adult counterparts. First-time owners have a tendency to over-exercise their puppies, which can be detrimental to the health of developing joints. If a puppy is over-exercised it will tire quickly and may be susceptible to early-onset arthritis. The Kennel Club suggests a suitable ratio of five minutes exercise for every month of age, for example, ten minutes for a puppy that is two months old, fifteen for a puppy that is three months old etc.

Observing this basic principle will ensure your dog remains at an optimum state of fitness and health throughout its early stages when it is most vulnerable...(Read on)

#4 Firework season is approaching! How will your pets cope?

I once visited a friend and was surprised to find their dog wedged into an impossibly small space beneath a dresser, facing the wall with just its tail sticking out. He risked an occasional nervous peep over his shoulder and looked extremely sorry for himself - somewhat like Eeyore! This was how Sam spent every fireworks night and thunderstorm so everyone just learned to leave him in peace. 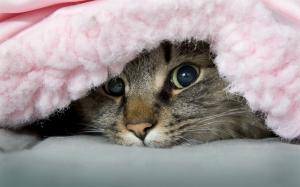 It turns out that eight out of ten pet owners have experienced at least one animal with a fear of fireworks (and thunderstorms!). Symptoms can range in severity, from shaking, panting and hiding, to destructive or aggressive behaviours as a result of sheer panic. How you respond to their behaviour will greatly influence how the fireworks night progresses but always remember that they are acting out of fear, so telling them off will only make matters worse...(Read on)

#3 How to brush your dog's teeth

Brushing our teeth is part and parcel of our everyday routine and most of us wouldn't consider going a day without doing them. Why then should we expect our pets to be comfortable going days on end without having their teeth cleaned? Every day our mouths are subjected to millions of different germs, whether it’s from eating food or chewing pen ends and fingernails, and this is really no different for dogs whose days are also spent eating and chewing.

They might not be able to tell us if their mouths are hurting, but by checking regularly we should be able to detect inflammation for ourselves. Observing good oral hygiene is not just about preventing yellow teeth and bad breath, but avoiding more serious health implications such as heart, liver and kidney disease, which both humans and dogs can develop. Mouth cysts and tumours can also appear where oral hygiene is poor and these can be extremely uncomfortable and can make eating difficult...(Read on)

#2 Choosing the right commercial diet for your dog

With so many dog foods on the market nowadays, deciding which one is right for your dog can be a confusing process. Yes, variety is a good thing, but too much of it can make the decision more difficult. Dry or wet food? Commercial kibble or home-cooked? Leading brand or supermarket own? Breed or life stage specific? When it comes to dog food, navigating our options is a bit of a minefield. 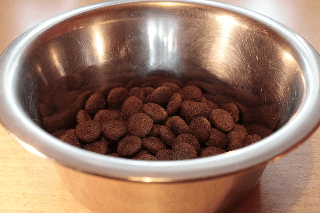 Not everyone favours the commercial diet but there are plenty that do. While some are passionate about the benefits of alternative diets i.e. home-cooked or raw, others are incredibly satisfied with the standard of commercial diets out there and choose to feed them as a staple diet. If you fall into the latter category, hopefully this article will guide you through the sea of choice that is commercial dog food and encourage you towards opting for quality over price. In fact, switching to a more expensive diet might actually be more economical for you in the long-run...(Read on)

#1 Foods to avoid feeding your pets this christmas

At Christmas time we are all guilty of a bit of festive indulgence and wanting to spoil our pets is only natural. Whilst the odd treat here and there is harmless, it is worth being mindful of the human foods that can be fatal to dogs and cats so we know what to avoid feeding them, particularly at Christmas when these are often disguised in seasonal treats.

Everyone knows that dogs cannot eat chocolate; however lesser known toxic foods such as grapes and certain types of vegetable can pose a greater risk to our canine friends than we might realise.

Whilst being completely safe for us, various substances can play havoc with a dog’s digestive system and cause discomfort and in many cases, complete deterioration and death. Seeing our pets suffer is distressing, and ensuring they only consume foods that are safe for them is a number one priority, whatever the time of year...(Read on)