The dangers of anti-freeze

Anti-freeze, or ethylene glycol, is regularly used at this time of year as a coolant in car radiators and is the leading cause of serious accidental poisoning in cats and dogs. Ethylene glycol is a toxin that makes up roughly 95% of all commercial anti-freeze solutions. It isn’t poisonous in itself, but when broken down in the body and absorbed, ethylene glycol compounds are highly toxic, acidifying the blood and eventually leading to total renal failure.

Because the early signs of ethylene glycol poisoning are non-specific and are quite often mistaken for other problems, incidences of poisoning commonly aren’t treated within the critical period when veterinary intervention could be successful. Unless you are fortunate enough to catch your pet ingesting anti-freeze, you might put down its general malaise to simply being ‘under the weather’ or ‘out of sorts,’ rather than seeking immediate veterinary help.

By the time your pet does start displaying obvious symptoms, it is likely to have become uremic, meaning the kidneys have failed. At this point, the prognosis is usually poor. 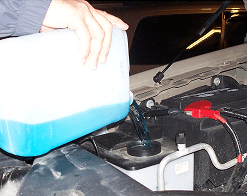 Unfortunately, anti-freeze is thought to have a sweet taste, something which makes it immediately appealing to animals, especially cats. The additive is also odourless and colourless (sometimes) so cats and dogs aren’t repelled by it, thinking instead that it might be some sweet tasting water. For this reason it is essential that, if there is a spillage of anti-freeze from your vehicle that makes it onto the ground, you clean it up before your pet has access to it.

If you see your pet ingesting, or suspect it has ingested anti-freeze, contact your vet immediately. The sooner it’s treated, the greater your pet's chance of survival, even if only a small amount is consumed. It is thought that less than 5 tablespoons of anti-freeze is enough to poison a medium-sized dog, with much less affecting cats (1 tablespoon).

There are three stages of anti-freeze poisoning; initial symptoms, which may be evident within 30 minutes of ingestion, are relatively minor (i.e. vomiting, a 'tipsy' or un-coordinated gait, tremors or twitching, increased thirst and urination, and mild to severe depression). Moving into stage 2, animals tend to stop displaying obvious symptoms while the toxin is being absorbed from the digestive system and causing internal damage.

By stage 3 of poisoning (usually within 12-24 hours in cats and 36-72 hours in dogs), symptoms will progress catastrophically, with severe lethargy and depression being evident, along with a tender or painful abdomen (around the kidneys), excessive salivation, a low body temperature and rapid heart rate, convulsions and complete deterioration.

If you are certain your pet has consumed anti-freeze and isn't suffering from some lesser complaint, before taking it along to the vet, try giving it a strong salt water solution to make it vomit up the harmful toxin. Do this no more than 3 times at 10 minute intervals and, if unsuccessful, go straight to your nearest veterinary practice. Others recommend giving a small amount of neat spirit, which acts almost as an antidote for the ethylene. 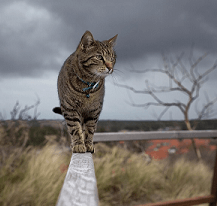 Because anti-freeze is a common product found in most households and garages, our pets are frequently exposed to it, especially when we top up our cars and it leaks from the radiator. Cats are a lot more likely to lick this up than dogs, being left to wander unattended outside, and need to ingest a far smaller amount of ethylene glycol to be in danger. If you own a cat or know of cats in your area, be particularly vigilant about using anti-freeze and make sure it is stored well out of harm's way.

Thankfully anti-freeze poisoning is completely avoidable so, as long as you are sensible about where you leave it and how you use it (and your neighbours too!), there shouldn't be any danger to your pets. Make sure all containers are securely sealed after use and be sure to check the floors of garages and driveways for any spillages. If you use anti-freeze a lot at this time of year, think about switching to a propylene glycol-based one instead as, while it is still toxic, it is far safer than the ethylene glycol solutions on the market.

If you have any further advice on keeping your pets safe from anti-freeze poisoning or any experiences of your own, please share it with our other readers! Feel free to contact me directly with questions and/or suggestions for future blog posts: [email protected]

This is one of the problems That I worry over. I would hate for my pet to end up dying , in the cold and all alone.I do not want my pets to roam away without my being there.

This is extremely important and informative - I had no idea that anti-freeze would be attractive to a cat/dog. I think vets should have a notice in their waiting room with these facts. Thanks for the info.

Thank you, I had some knowledge about this, but not nearly enough. This is very useful to know,
Many thanks
J Johnston
Coventry

Halfords are now selling Antifreeze with Bitrex added. It was done to protect chidren, but obviously also prevents cats and dogs from ingesting it. Halford deserve the creit (and business) for being the forst in the UK to do this. It has been compulsory in France for several years.

Thank you for this very useful piece of info.

You have covered the car and garage re antifreeze but I have heard that some people use it to stop ponds freezing over or any other items that need treating. It is time that this poisonous substance was made safe the same as they are doing for insecticides and pesticides

Unfortunately we get a lot of cases of deliberate poisoning where I live. Some people have lost several cats. It should be compulsory for ALL antifreeze to have something added to it to make it taste nasty to animals. If Halfords can do it, it can't be hard or expensive!

I lost my cat a few years ago to antifreeze poisoning. Sadly I didnât recognise the symptoms and my neighbourâs cat also died. Surely it canât be that costly to add something to it that makes it taste unpleasant. It breaks my heart to know that he must have been suffering so much and I just thought he was feeling a bit down in the dumps. He went out the next day and I never saw him again.

There should be some campaign to manufacture anti-freeze which is repellent to pets, if this is possible, requiring manufacturers to make it safe or unpalatable.

I agree there should be a campaign to manufacture anti-freeze repellent to pets. Who is going to start this and which petition site?

Well done to Halfords for taking the lead.I do hope others follow.Thanku for the information.I do not let pur cats out this weather in case they ingest anti freeze.Can you also warn of the dangers of slug pellets in summer.?

Unfortunately the government didn't bother to ban the substance in anti-freeze which kills pet cats...
I remember signing and tweeting the petition.
Yes, there are some evil sub-humans about who leave this out to kill local cats..
About time the government made this non hazardous for our beloved cats.
Accidental or deliberate poisoning is an absolutely horrific way for a cat to die