Most horse owners will now be aware of Equine Grass Sickness (EGS). But for those that aren't, Grass Sickness is a disease that results in intestinal paralysis. The clinical signs are dullness, depression, inappetence, colic, patchy sweating, muscle tremors, increased heart rate, dribbling saliva, and decreased faecal output, and is often fatal. Until now it has been thought that the bacteria Clostridium Botulinum Type C could be the cause. However new research from Fera Science Ltd and the Royal School of Veterinary Studies has highlighted the potential role of the pasture fungi Fusarium in EGS.

The study involved collecting grass samples from 8 different premises where EGS occurred – both from the affected pasture and a neighbouring 'control field'. Interestingly, the median pasture Fusarium spore count for all premises, with one exception, was greater in the affected fields than the paired control field. Due to the primary stages of this study it is not yet possible to draw definitive conclusions but it has paved the way for further research in this area. 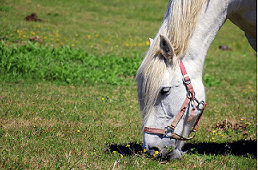 Type 1 Polysaccharide Storage Myopathy is known widely as "tying-up" in horses. The condition causes muscle cramping and damage to the muscle tissue. In severe cases Myoglobin released from the damaged muscle is excreted in the urine turning it a dark brown colour; this is serious and can cause extensive damage to the kidneys. However, most cases of tying up are not that severe. It is known that affected animals have a mutation of a key enzyme – glycogen synthase – involved in energy metabolism in muscle which leads to excessive storage of glycogen and polysaccharide within their muscles.

Professor Richard Piercy and Dr Charlotte Maile from the Royal Veterinary College have had a breakthrough in the underlying mechanism of this form of tying up. They have discovered that the mutation in the enzyme leads to a change in the enzyme’s structure which leaves it permanently active, so it cannot be switched of. This hyperactivity of the mutant enzyme explains the increased muscle glycogen and the accumulation of polysaccharide that leads to the clinical problems in affected horses. With this huge step forward RVC researchers are now working towards improved treatments and management of this disorder.

Equine dentistry has become 'trendy' again in the veterinary world and there have been huge advances in recent years in the understanding of anatomy and physiology (i.e. the structure of horse teeth and how they work), why particular conditions occur and also in techniques and equipment. Historically tooth root infections in horses required the affected tooth to be extracted - a time consuming and risky procedure due to the length of the root, especially in young horses.

A few dental specialist vets are now offering endodontic work in an attempt to avoid extraction. This is similar to a root canal filling in people but much more complicated due to the fact that as opposed to the single pulp found in human teeth, horse's cheek teeth have between 5 and 7 pulps which are large, open and often communicate in young horses. This procedure is not yet considered the industry standard due to lack of published research but 'watch this space' as it is likely to be the way things are done going forward.