The British Shorthair is the most popular pedigree breed of cat in the UK. It is also one of the most ancient, potentially dating back as far as the first century AD.

It’s likely that when the Romans invaded Britain in 55 B.C, they brought with them their domestic felines. These went on to breed with European cats; the result of which became the British Shorthair as we know it today.

It’s possible that the breed’s ancestors also include the Persian cat, which was added to the gene pool later to improve coat thickness. A large and robust cat with a short, dense coat, the British Shorthair hasn’t changed much from the initial type. 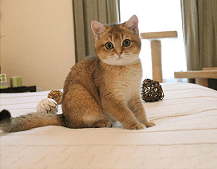 Its gentle and loving nature, along with its inherent hardiness and sound health, made it a popular choice with all groups of people, and in the nineteenth century selective breeding of the British Shorthair began in earnest to harness these desirable traits.

Often described as the ‘most laid-back breed of cat,’ British Shorthairs are known to get along well with children and other pets, and are happy to live exclusively indoors if given company.

Despite pictures of British Shorthairs often depicting the blue variety of cat, they come in many colour variations, including cream, chocolate, black, silver, cinnamon, red and fawn. They also come in tabby and tortie varieties too.

If you are a lucky owner of a British Shorthair, we would love to hear from you. Please comment below and tell us about all about your friendly feline :)

What beautiful cats they really stunning.