Every day countless records are made and broken around the world – but not all of them by people. In fact, many of our world record-breakers are cats, and now is the purr-fect occasion to have a look at some of their amazing achievements and discover why cats remain one of the most popular animals in the world!

World’s Oldest Cat – despite no longer being with us, for now this title belongs to Crème Puff, an American cat who passed away at the grand old age of 38 years and 3 days (equivalent to 168 cat years). Crème Puff lived with her owner in Austin, Texas, alongside another cat, Granpa, who also lived to be 34 years old. Today there are several cats claiming to hold the record for ‘oldest living’ but they are all yet to surpass Crème Puff in age.

World’s Longest Cat – Mymains Stewart Gilligan, or ‘Stewie’ for short, holds the record for longest cat ever to exist. Stewie, a domestic Maine Coon, measured a whopping 48.5 inches when stretched out, and also held the record for ‘world’s longest cat tail’ (16.34 inches). Sadly, Stewie passed away in Feb, 2013 after battling cancer and has recently been succeeded by Lupo, a Maine Coone from Wakefield, South Yorkshire, who measures 37.2 inches in length. 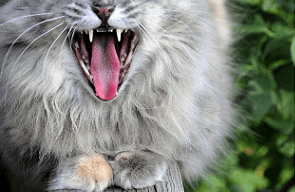 Longest Fur on a Cat – a Californian rescue cat called Sophie holds the world record for longest feline fur, with a measurement of 10.11 inches at its longest point.

World’s Smallest/Lightest Cat – Tinker Toy, a blue point Himalayan cat from Illinois, USA, measured a tiny 2.75 inches tall, 7.5 inches long and weighed only 1lb 8oz when fully grown at two and a half years old. The smallest of a litter of 6 kittens, Tinker Toy lived to be 6 years of age before sadly passing away in Nov, 1997.

Cat with Most Toes – this unusual record belongs to ginger tabby cat, Jake, who lives in Ontario, Canada. Unlike most cats with a total of 18 toes (5 on each front paw and 4 on each hind paw), Jake has 28 toes – 7 on each paw! Each toe is fully functional with its own bone structure, paw pad and claw.

Cat with Loudest Purr - ear plugs at the ready! The world's loudest purr came from Merlin, a rescue cat from Torquay, Devon, whose purr registered 67.8 decibels!

Longest Jump by a Cat - a record held by Alley, who jumped 182.88cm (6 ft) in Oct, 2013. Impressive as this is, I'm sure there are many cats that have exceeded this and are yet to get their names in the record books!

World's Wealthiest Cat - when Blackie's owner, Ben Rea, died in May 1988, he forgot his family and bequeathed an incredible £7 million and his entire estate to his last remaining cat, while splitting the rest between 3 cat charities. Rea was a reclusive millionaire antiques dealer who devoted his life to his 15 cats - all of whom shared his mansion with him until their deaths.

If you know of any other cat world records, please comment below or email me directly and I will add them to our list: [email protected]