The world's most famous cats

Anyone with a cat will tell you their kitty is the best in the world, and it’s fair to say that none of them are wrong. But some cats have titles and fame that set them apart from your everyday feline and even put some of us humans to shame!

Though they are often overlooked, cats have always been prominent in the history books and are some of the most popular characters on the internet today. From cats of old that overcame incredible feats during wars, to those that broke records and grabbed people’s attention with their unique appearances, today we’re discussing some of the world’s most famous felines and how they were catapulted into the spotlight.

7) Mike – better known as ‘The cat that guarded the British Museum,’ this famous feline was deposited on the steps of the museum in 1909 by ‘Black Jack’, a feral cat that had been visiting Dr. Richard Garnett in his department for some months. Mike went on to make friends with the gatekeepers at the museum and was maintained on a diet of tender meat and fish. For two decades he patrolled the grounds of the British Museum before being passed over to the Cats’ Home due to ill health in 1929. 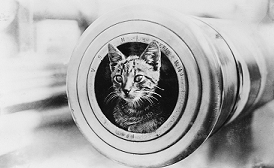 6) Able Seacat Simon – the only cat to receive the Dickin Medal for animal gallantry, Able Seacat Simon was ship’s cat on the HMS Amethyst, a British warship just after the end of WW2. Smuggled onboard in 1948, Simon quickly became the ship’s chief ratter, helping to manage the vermin problem that was rapidly damaging food supplies. After a particularly ferocious encounter with Chinese forces, Simon was awarded the Amethyst campaign ribbon for ‘behaviour of the highest order’. When he died in 1949, Simon was buried with full naval honours.

5) Emily – the American cat that accidentally travelled to France is not only famous for her transatlantic jaunt, but for highlighting the importance of ID tagging your pets! Emily disappeared from her Wisconsin home in 2005 and was found a month later at a laminating company in Nancy, France. The most likely explanation was that she snuck into some paper bales, which were placed in a container and taken by truck to Chicago. From there they went by boat to Belgium and continued onto France. Thanks to Emily’s ID tags she was able to be reunited with her family.

4) Unsinkable Sam – originally named ‘Oscar’ before famously surviving three shipwrecks during WW2, Unsinkable Sam was onboard the Bismarck, the HMS Cossack and the HMS Ark Royal when they foundered, yet somehow managed to survive them all by clinging onto floating debris. Eventually Sam was returned to the UK where he lived out his days hunting mice at a ‘Home for Sailors’ in Belfast.

3) Blackie – holding the record for the richest cat in the world, Blackie inherited a generous $25 million from his owner Ben Rea. There was huge controversy when the millionaire recluse died and left nothing to his relatives, bestowing everything on his beloved feline friend. 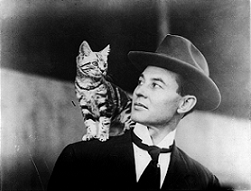 2) Crème Puff – born in August, 1967, this American cat was the oldest ever recorded, living to a grand old age of 38 years and 3 days (or 168 cat years!) Crème Puff lived in Austin, Texas with her owner, Jake Perry, who also had another cat aged 34 years and 2 months. There has been much speculation about the diet fed to Perry’s cats, who reportedly maintained them on bacon and eggs, asparagus, broccoli, and coffee with cream.

1) Grumpy Cat – real name ‘Tardar Sauce’, Grumpy Cat is now an internet sensation with a face that is familiar the world over. Originally made popular in 2012 when the cat’s ‘grumpy’ expression was posted on Reddit, Grumpy Cat now has her very own Facebook page with over 8.5 million fans, appears in memes on calendars, stationary and just about everything else, and is even being made into a waxwork model at Madame Tussauds in San Francisco. Although her unique appearance is caused by a form of feline dwarfism, Grumpy Cat’s owner describes her as a happy, healthy kitty with a life that is ‘99% normal.’

If you can think of any other famous felines, please let us know! Either comment below or email me directly: [email protected]

Some of my favourites: Cole and Marmalade, Fukumaru, Colonel Meow, Kitler, and of course my own, Smudge, Trixie, Felix, Ginger, .....

Since my two 17 year old cats passed away, my neighbour's cat has guarded the graves. He sits or sleeps besides them everyday - as if there is some spiritual link. Also, with his presence other cats rarely come into the garden. Amazing and he has been a great comfort since my loss.

Lovely list but how about Mrs Chippy (he accompanied the crew on E Shackleton's Trans Antarctic expedition on Endurance).

Hamish McHamish of St Andrews in Scotland had his own Facebook page. He was so loved that a bronze statue was commissioned and erected in his honour. His Facebook page still exists if you want to look him up. He was a beautiful long haired ginger and white who left his home as a kitten but lived in student flats and other houses and whiled away his time visiting a hairdressers and spending the day snoozing in a comfy chair or at the local estate agent where he had his own chair. There has even been a book written about him containing stunning photos. He was a darling.

Felix As Good As It Looks Mixed Selection Cat Food Bulk Boxes
from £13.40