There is a new phenomenon sweeping the internet – cats in circles. You might be wondering what on earth I’m talking about, so here, let me explain. If you own cats, you may have noticed their natural inclination to sit in circles marked out on the floor. Whether it’s a circle formed by an odd piece of string, a belt, or your dressing gown cord, cats are strangely drawn to the magic of a circle and will quickly claim it as their own.

Just recently, more and more people have been posting their images of “cat circles” online, prompting debate into the scientific reason behind this mystery behaviour – if, of course, there is one. Some say it’s territorial – that cats just love to own things. Others say it’s the sense of security a closed space offers. Not to be forgotten is the “nest” theory, which cites how cats are prone to walking in circles before laying down – a tendency that clearly makes them feel more comfortable. 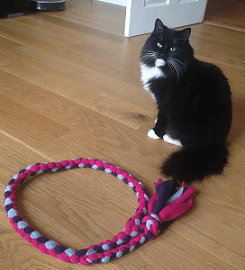 If it is just an issue of territory, this makes perfect sense, forgetting the fact that cats claim the entire house as their territory, so why should a 2D carpet circle be something special? Maybe it really does come down to the allure of the space within the boundary - a space that is defined and contained and ultimately worth occupying! Some cats have even displayed aggression in guarding their circles from other cats, which goes some way in supporting the theory. After all, cats are amongst the most territorial animals on the planet, so why shouldn’t a new boundary interest them?

The theory of security and protection also carries some weight in my mind. Everyone knows that cats love boxes. I don’t know what it is about them that holds such appeal, though I can probably make an educated guess. Like all domesticated animals, cats need to feel safe in their everyday lives. If they don't have somewhere cosy to retreat to, they can become very agitated. It is possible that circles provide the sense of enclosure that cats crave.

Boxes and other confined spaces also afford this and, being so agile, cats don't hesitate to dive into the most inappropriate spaces, so long as they feel protected and secure there. With this in mind, you would think that only raised or 3D circles would be of interest to the curious cat, but research has shown otherwise. Experiment after experiment has proven that even flat circles marked out by tape are attractive enough to have cats sitting inside them. Though, surely this is no more secure than sitting the other side of the line?

It is impossible to know exactly what's behind the cat circles phenomenon, although there's some convincing theories out there. If you are a cat owner yourself, why not give the experiment a try? To help frame your own theories, consider the following aspects:

- The shape of the circle (whether it is completely round, ovular or more square - does it make a difference?)

- The material (does a soft or hard boundary make a difference?)

If you have any comments or experiences, please share them with our other readers! Feel free to contact me directly with any further questions and/or suggestions for future blog posts: [email protected]

It's quire easy after visiting the pub and talking about Pythagoras they try to find the start and the end of a circle, get dizzy and fall down. Feeling it's a safe place to be they stay there until the hangover goes. Don't care what you say it worked for me!!

I have six cats and they all ignored it apart from the youngest one who attacked it and left it in a heap. The others all walked round it.

When I get the cylinder vacuum out, the hose always makes a circle on the floor. My cat likes to sit inside the circle - until of course I am about to use it then he scarpers

One of our cats just loves to get inside the pony's small round feed bowl or round garden tub withthe daffodil bulbs in - amongst other "enclosed" things. Not seen him sit inside anything that is just a round shape on the floor though. The other cat just likes laying on anything warm!