A breed of old from the Isle of Skye, the Skye terrier originated more than four centuries ago and has a history that’s shrouded in mystery. Some versions of its early life detail how a Spanish shipwreck brought Maltese dogs to the island, which went ashore and bred with native terrier-types, resulting in the Skye we know today. Another account claims the Skye is the result of Viking invasions which brought dogs like the Swedish Vallhund to the island.

Whatever the truth, it is clear the Skye has been a recognised breed there for many hundreds of years. Yet, despite traditionally being a relatively common breed that was widely used for hunting, the Skye is now better known for its rarity with only 63 registrations being made last year in the UK, compared with 34,715 registrations for Labradors. 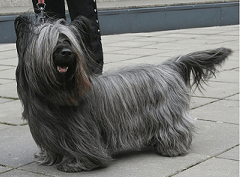 But once upon a time Skye terriers were the dogs of choice for many northern working families. Their short, sturdy build, coarse double coat and tenacious personality made them perfectly suited to small quarry hunting in the Scottish Hebrides – wild, rugged and rocky, the Skye had to withstand inclement weather and rough brush on a regular basis as it hunted otter and fox amongst the cairns. Dogs like the Skye were originally sought, first and foremost, for their skilfulness and adaptability and for their companionship second.

However, despite where the breed came from, the Skye terrier hasn’t always been known by this name. Once referred to as the Clydesdale terrier, Paisley, Glasgow and Silky Skye terrier, the Skye’s name has undergone many changes while its appearance has remained fairly similar. The Skye of today retains many, if not all, its earlier features and very closely reflects its ancestors, which makes tracing it easier.

Queen Victoria is one famous figure of many who held a particular soft spot for the Skye and integrated it into the royal household. Previously, dogs had remained outdoors in the kennels as ‘backyard pets’ or working dogs, but Queen Victoria liked to surround herself with her loyal companions whenever possible. Mary Queen of Scots is also believed to have attended her execution with her Skye terrier hidden beneath her skirts. 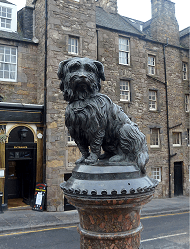 Perhaps one of the most prominent Skyes in all of history was Greyfriars Bobby, a young dog that spent 14 years guarding his master’s grave following his untimely death. John Gray was a gardener-cum-police night watchman who adopted Bobby for company on his overnight shifts. When he succumbed to tuberculosis and died in 1858, Bobby refused to leave his master’s grave, come rain or shine.

Eventually people started taking notice of this lonely dog holding vigil and began leaving food out and creating shelter for him during the worst of the weather. When Bobby passed away on the 14th January 1872, a granite memorial fountain was erected in his honour.

If you are one of the few lucky people to own a Skye terrier, we would love to hear from you! Comment below or email me directly: [email protected] For more information, why not visit our dedicated breed page?