PPID, or Equine Cushing’s Disease, is a hormonal disorder affecting horses and ponies. One of its most devastating clinical signs is laminitis – a severe and debilitating condition affecting the feet and hooves. Many people aren’t aware that the two are related, despite 90% of horses with recurrent laminitis having an undiagnosed hormonal disorder like PPID, which can be managed with medication.

Here, Moira Rogers tells us how she first heard about PPID and acted on the advice given to her when she started noticing symptoms in her 15 year-old mare, Meg.

‘Meg was approaching middle-age and was inevitably slowing down a bit. I hadn’t competed on her much over winter, which I blamed for her poor performance. Beside a couple of mild laminitic episodes which the vet and farrier had helped treat, her general health seemed good and she was in fine spirits. In spring I noticed that Meg was holding onto her coat a bit longer than my other horses, but this had happened before so I wasn’t worried.

One day in July, I was flicking through a horse magazine and came across an article about PPID. I had never heard Cushing’s called this before and wasn’t terribly interested; knowing very little about the condition other than it causes a long, curly coat, which Meg didn’t have, I read it just to pass the time. 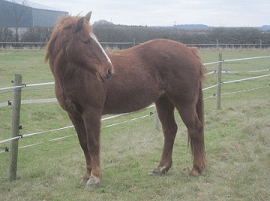 It wasn’t until I came towards the middle of the article that I started taking notice. It began to talk about laminitis and other symptoms like excessive drinking, loss of topline muscle, lethargy and poor performance that are often overlooked, but which often signal PPID.

The minute I read it, I knew. Not only had Meg had recurrent laminitis, she was sluggish, in poor condition and I’d been filling up her water buckets a lot more frequently. The article told me to contact my vet and have Meg tested.

Fortunately, through the Talk About Laminitis campaign I was able to claim a free voucher for the test. Because Meg was 15 and showing symptoms, she qualified for the voucher without a vet referral. I filled in the form, submitted it and arranged for my vet to come and take a blood sample. When the test came back positive for PPID, I was devastated. How had I failed to notice?

However, my guilt quickly turned to relief when Meg was put on her medication. Within a fortnight I was noticing changes and I could already tell she was feeling better. Meg has been on her meds for a few months now and is quickly regaining weight and muscle condition, is performing better and the farrier reports how well her feet are looking. It is only now she is improving that I realise how bad she had become!

If there is any downside to this discovery it’s that Meg will be on the medication for the rest of her life which will prove an expensive investment. However I have found VioVet to be one of the cheapest suppliers out there and will continue to purchase my horses’ medication, supplements and supplies from them. I want to stress that the classic signs of Cushing's aren't the only signs, and there are many other things to be aware of, especially if your horse is over 10 years old.'

If you suspect your horse could have PPID, claim your free test voucher from Talk About Laminitis until the 31st of October, 2015. Feel free to post your comments and questions below or email me directly: [email protected]

My horse M is 21 years old. Last winter she had a thicker coat which was more like a rabbits fur but not much longer
M had no other signs. When her jabs were due in April I asked the vet to test her for Cushings,the test came back positive, she is now on medication and she did lose her appetite for a while, she is still a bit picky with her food, she has since had a re-test and levels have now reduced. Although M will be on medication for the rest of her life you wouldn't know anything was wrong with her. Sometimes you know your horse better than you think!

Farrier's Formula for Horses
from £34.00