You’d be forgiven for thinking that a dog named the ‘Australian Shepherd’ originated, or at least developed, in Australia, but, in actual fact, this is a total misnomer. Although where, how and when the breed first appeared is vague, there is strong evidence to say it developed in the American West where it was once used for herding livestock and cattle across ranches.

Over the years, the Australian Shepherd has been known by various names, including the Pastor Dog, Bob-Tail, Shepherd Dog, Mexican Shepherd and California Shepherd. Why the name ‘Australian Shepherd’ seems to have stuck is debateable although three theories provide plausible explanation. 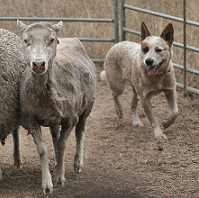 The first being that the dog was taken from Australia by Basque shepherds on their subsequent return to the American West; the second that the dogs’ original use was to herd sheep imported from Australia and other regions; and the third and final being that many dogs coming from Australia had blue merle coats, hence why ‘Australian’ was used to describe any dog boasting this characteristic.

However the dog got to America, whether taken by Basque shepherds from the Pyrenees, or through Australian imports, it is perhaps more relevant to think about how it developed into the Australian Shepherd of today. Why was the breed necessary during the 19th and early 20th centuries? And how were its unique traits harnessed for later generations of dogs?

For cowboys and shepherds living and working in the American mid-west, it was highly important that their shepherding dogs had endurance, athleticism and intelligence when working the land. The Australian Shepherd was a tireless and versatile breed adept at many working roles, from assisting as a ranch hand, at horse shows and rodeos, to herding livestock in the Rocky Mountains. To be successful at the latter, the Australian Shepherd had to cope well with high altitudes and rugged, often treacherous, terrain.

In time, ranches in Boulder, Colorado, began breeding the dogs extensively, leading to lots of in-breeding that diminished the quality of the stock. Ranchers still came from far and wide across America to purchase the 'ultimate-shepherding dog,' returning with them to California where conditions were similar to those found in the mid-west. Before long, more tenacious dogs were required as flocks were introduced for their food and fibre. During the California Gold Rush of 1849, the demand for mutton and wool increased tenfold and more sheep were needed to meet this need. 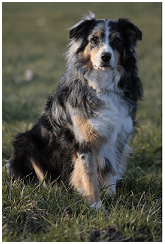 The dogs now not only had to herd their flocks, they also had to guard them from predators and thieves. The open range nature of the landscape made their jobs more difficult, but the Australian Shepherd rose to the challenge, impressing everyone time again with its keen abilities. Not only was the Shepherd independent when it came to being a guardian, it was highly obedient, which made for the perfect working dog.

With all this in mind, it’s hardly surprising that the Australian Shepherd became a popular movie choice, appearing in feature films such as Run Appaloosa Run, Flight of the Navigator and the Famous Five and its sequels. Today the Australian Shepherd remains a popular breed in the US and can still be seen performing at rodeos in the American West.

If you are a lucky owner, please let us know! Don’t forget to register your Shepherd with us and upload your photos to the dedicated breed page. For comments and questions, please post below or email me directly: [email protected]

I have an Australian shepherd and he is fantastic research I did found them being imported to Australia with handlers from Spain at the height of their sheep growth as they had no good sheep dogs st that time.then they went to America as they are better cow dogs than sheep dogs and having had a border collie I think I would probably have to agree.he is great with kids probably over friendly but he is a great companion and house dog we love him.