Kissing your dog could be good for you

The issue of whether to kiss your dog is one that divides a lot of pet owners. For most of those who avoid the practice, it isn’t a question of affection, but of health and hygiene.

But the debate could soon be settled for good, thanks to researchers at the University of Arizona. They believe that kissing your pooch on the mouth could actually help keep your digestive system healthy, and are now putting their theory to the test in a study titled “Dogs as Probiotics”.

This is because a dog’s mouth is full of all kinds of bacteria, including the healthy kind that are often accidentally eliminated in humans by modern medicines.

According to doctoral student and researcher Kim Kelly: “The question really is: Has the relationship between dogs and humans gotten under the skin? And we believe it has.” 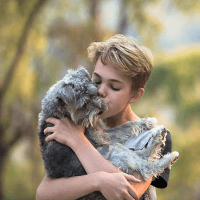 Lead researcher Charles Raison elaborated: “If the dogs and human owners look similar microbiota-wise … then it means dogs are basically having probiotic-enhancing microbiota of human owners.”

Participants aged 50-60 who have not lived with dogs for at least six months will be asked to foster a rescue dog for 12 weeks. The gut function other both humans and pets will be monitored using non-invasive methods to see if spending time with a dog increases the level of positive microbes, and whether this has a positive effect on the immune systems of older adults. These include reductions in the sneezing, inflammation, itching and hives often associated with allergies, as well as mental health.

They will also assess the dogs’ health and overall well being to find out whether the relationship is mutually beneficial.

If the findings are positive, researchers have said they would like to see if the same outcomes are found in children who live with dogs.
However, the study itself could lead to greatly increased happiness in some of the participants: the human subjects will be given the option to permanently adopt their canine companion once the three-month research period is over.

I have owned dogs since I was 7 years old. I am now 80. For the last 30 years I have owned, show and judges Shibas. I judged them at Crufts last year. In all that time I have allowed not only my own but other peoples dogs to kiss me and returned the favour. It is not only medicinal but mental health they help cure.

My dog always looks for kisses from me and I am always happy to give her kisses as well, I see nothing wrong with it at all

Just have to ask my dogs for a kiss and they give you one .
When I go to the shops I have to bring them back a treat as they wait at the gate at the top of the stair I show them that I have their treat and get a kiss