Be the first to review this

For cattle in their first grazing season. 7 pulses of oxfendazole over 21 weeks. Suitable for 100kg to
400kg cattle used at turnout. POM-VPS.

Below is the product datasheet. This has been provided by the manufacturer and should always be provided with the medication.

Each bolus contains a total of 8750 mg oxfendazole, presented in 7 individual tablets of 1250 mg each. The bolus also comprises a corroding alloy core and mild steel end weight to prevent regurgitation.

For administration to cattle weighing between 100 kg and 400 kg at the time the bolus is given. Designed for dosing prior to turnout of cattle in their first grazing season.
In grazing cattle, the device will deliver seven doses of oxfendazole for the treatment of both adult and immature gastro-intestinal roundworms, lungworms and tapeworms at regular intervals of approximately three weeks during a period of approximately 21 weeks, the first dose being released around three weeks after administration. The device thus delivers a programmed therapeutic anthelmintic dosing regime over a period of approximately twenty-one weeks.
Oxfendazole is an established treatment for:
Gastro-intestinal roundworms: Ostertagia, Haemonchus, Trichostrongylus, Nematodirus, Cooperia, Capillaria, Oesophagostomum, Chabertia, Trichuris.
Lungworms: Dictyocaulus viviparus.
Tapeworms: Moniezia, heads and segments.
At the recommended dose rate in cattle, oxfendazole is effective against inhibited/arrested larvae of Cooperia and usually effective against inhibited/arrested larvae of Ostertagia.
It is also ovicidal against nematode eggs.

Dose
Bodyweight should be determined as accurately as possible. One bolus should be administered to each animal being turned out to pasture for the first grazing season.
Alternatively one bolus may be administered later in the grazing season - ideally approximately three weeks before the first anthelmintic dose is normally required, or approximately one week before a move to pasture which has previously been contaminated by worm eggs.
Lungworm infestations, which develop during the active life of the bolus and are present at the time of pulsing will be controlled by oxfendazole.
Under conditions of very heavy larval challenge, clinical signs of lungworm can become evident within 10-14 days of picking up an infection. Therefore, if clinical signs of lungworm occur in treated animals they should be dosed immediately with an appropriate anthelmintic. Lungworm infestations can also sometimes develop after the active life of the bolus.
Administration
Administer orally using the Autoworm Bolus Applicator which delivers the bolus directly into the top of the gullet.
When using the Autoworm Bolus Applicator, insert the bolus into the balling gun with the metal end weight innermost.
The applicator should be inserted from the front (not sides) of the mouth and over the back of the tongue, with no more than gentle, firm pressure. As the animal begins to swallow the end of the gun, the passage down the throat becomes easier. The applicator is now in position for firing. Depress the plunger to eject the bolus. Normal care should be taken not to cause injury by placing the gun too far inside the throat of the animal. Ensure that each animal has swallowed the bolus by observing the animal for a short time after dosing. 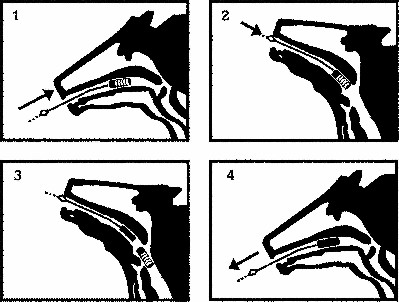 Do not administer to non-ruminating calves or calves less than 12 weeks of age.
Do not administer to animals weighing less than 100 kg or exceeding 400 kg.
Do not exceed stated dose.
Do not use the bolus concurrently with other bolus products, excepting Cosecure† and Rumbul†† Magnesium Bullets.
Care should be taken to avoid the following practices because they increase the risk of development of resistance and could ultimately result in ineffective therapy:
•Too frequent and repeated use of anthelmintics from the same class, over an extended period of time.
•Underdosing, which may be due to underestimation of bodyweight, misadministration of the product, or lack of calibration of the dosing device (if any).
Suspected clinical cases of resistance to anthelmintics should be further investigated using appropriate tests (e.g. Faecal Egg Count Reduction Test). Where the result of the test(s) strongly suggest resistance to a particular anthelmintic, an anthelmintic belonging to another pharmacological class and having a different mode of action should be used.
Resistance to benzimidazoles has been reported in some parasite species in cattle. Therefore the use of the product should be based on local (regional, farm) epidemiological information about susceptibility of nematodes and recommendations on how to limit further selection for resistance to anthelmintics. Only gentle pressure should be used during bolus administration.
If lungworm vaccination is practised in calves before turnout, the bolus should not be administered until after the second dose of vaccine has been given, thus ensuring that a period of at least three weeks elapses between lungworm vaccination and the release of the first dose of oxfendazole from the bolus.
No other anthelmintic should be given to a treated animal whilst the bolus is still active except:
1.Where clinical signs of a lungworm infestation become evident.
2.Where dosing for liver fluke becomes necessary.
If a treated animal is sold, then the purchaser must be informed of the date on which the bolus was administered.
As with other anthelmintics, veterinary advice should be sought on appropriate dosing programmes and stock management to achieve adequate parasite control, and to reduce the likelihood of anthelmintic resistance developing and also if the product does not achieve the desired clinical effect, as other diseases, nutritional disturbances or anthelmintic resistance might be involved.
Wash hands after use.
Withdrawal periods
Cattle (meat): 8 months.
Milk: not for use in cattle producing milk for human consumption, nor for cattle within eight months of an expected calving date which precedes the production of milk for human consumption.

Do not store or transport above 25°C. Store in a dry place. Protect from frost.
Any unused veterinary medicinal product or waste material from such veterinary medicinal products should be disposed of in accordance with local requirements. Do not contaminate ponds, waterways or ditches with the product.
Keep out of the reach and sight of children.
For animal treatment only.

Anthelmintic class: 1-BZ
Autoworm First Grazer with its programmed release of seven separate worming doses is designed specifically to allow a degree of nematode development for stimulation of immunity.
Immunity to nematodes depends on adequate exposure to infection. Although not normally the case, circumstances could occur in which anthelmintic control measures might increase the vulnerability of cattle to re-infection. Animals may be at risk towards the end of their first grazing season, particularly if the season is long, or in the following year if they move onto heavily contaminated pasture. In such instances, further control measures may be necessary.
Worm control is best achieved when calves are dosed with Autoworm First Grazer or Autoworm Finisher at turnout and set stocked throughout the grazing season, or moved to clean pasture in midsummer.
When an animal(s) is to be added to a group previously treated with Autoworm First Grazer or Autoworm Finisher then it is good management practice to minimise worm larval contamination of the pasture by the new animal(s). This can be achieved by dosing with an appropriate anthelmintic product at the time the animal is moved.
Where cattle have received the bolus during their first season at grass it would be good practice, as with other anthelmintic dosing regimes, to maintain control measures during the following season.
Studies have shown that oxfendazole produces no adverse maternal or foetal effects when administered at the recommended dose rate in cattle. When administered to lactating cattle, less than 1% of the administered dose is excreted in the milk. Therefore, there is little risk to suckling animals when the product is administered to lactating females.
Oxfendazole belongs to the benzimidazole (1-BZ) class of anthelmintics.

There are currently no questions for Pfizer Autoworm First Grazer - be the first to ask one!